"My Life Changed Completely" – in English

Maria Lucia Batioja balances being both a convert to the church and an immigrant to the United States from Argentina.  She tells her story of being a young girl playing in the orchards on a small farm in Argentina, her courageous decision to come to the United States and join the church, and her continual effort to build a life for herself in a new country as a mother, a Latin American, and a Mormon. For the Spanish version of this interview, click here.

How did your childhood in Argentina shape who you are today?

I joined the church almost a decade ago. It will be ten years on July 12. I’m from Argentina, from the province of Santa Fe. I grew up in a very, very small town on a very small farm.  We were not very open.  I was shy and quiet.  Even though my parents were not members of the church, I was always taught well. I am very grateful to my parents because they taught me to appreciate things and have my own values.

As a child from a small village, I see my children and say, “We have a lot. We have so much.”  For me and my siblings as children, we did not have toys.  We played with the seeds of peaches that we picked from the trees.  My parents had many fruit trees where we lived and those were our games. We were actually very good children.

How did you first come into contact with the church?

I was 22 years old when I decided to come to the United States. I had a sister living here, so I decided to visit and met my nieces for the first time.  It was hard because I had some complications with some of my sister’s family. I was living with her family, and I began to feel alone. I had no one because my whole family was in Argentina. That’s when I started to ask certain questions.

I wanted to go to church because I am a Catholic by birth, but we were really only Catholic in name because we never attended. Then, a good friend from Argentina called me on the phone and told me to pray. From there, I had a testimony. I did not know how to pray. I prayed at night, but did not know how, so I let Heavenly Father teach me how to pray. However, at the time, I did not know it was Heavenly Father. Then I started to pray, “God, help me. I need to know the truth. I feel alone. I need to know what to do. I need to get back to you.” Even though I did not have anyone, I was never alone because I always had faith in Him.

I prayed at night, but did not know how, so I let Heavenly Father teach me how to pray.

At this time, I really needed Heavenly Father. I prayed so hard that I could feel what I now know was the experience of the Holy Spirit, even though I did not know it at the time. I felt calmness and a peace. I felt my mind was at peace. I prayed longer than I ever had in my life. I asked the Lord in prayer to give me an answer quickly because if I could not find it fast, then I would not know what to do.

And it was really miraculous because the next day when I woke up, my sister went to work as usual, and I went and stayed with my niece. Then, there was a knock on the door, and it was the sister missionaries. I will always remember this sister missionary. When I opened the door for the missionaries, I said, “Come in, I was waiting for you.”  They seemed surprised when I said this to them. When I saw them, I knew it was the answer I was looking for. The Lord responded quickly to the prayer I had given the night before. As they began to share the gospel with me, I knew I wanted to be baptized. I knew because this was the answer I had been looking for, and I knew it was the true church because the Lord had answered me. 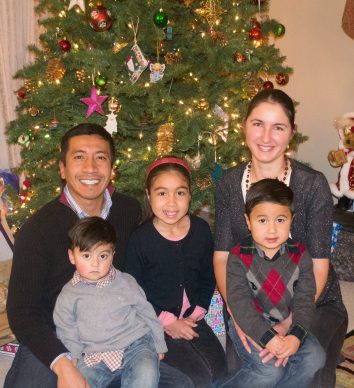 I asked the missionaries why they had come to my house that day. They told me they had prayed that day before approaching the house because they were always denied by the people living in the house, meaning my sister. She was in total disagreement with religion. That day they felt the spirit and decided to return to that house. One of the companions asked the other why they should go there if the woman who lived there always runs them off. The other missionary said, “Because I feel that in that house today she is going to receive us.”  For me, this strengthened my testimony that they had decided to come anyway and answered my prayer so I could hear the gospel and gain a testimony.

And from there, my life changed completely.

How did your family, in particular your sister, handle your decision to be baptized?

At first I had many problems with my sister. The missionaries were not allowed to come to her house. So, the missionaries came only when my sister was at work. I took the discussions and was baptized. When I was baptized, I had a discussion with my sister. Even though she did not agree with my decision, I was of age to make my own decisions, and I knew it was what I wanted to do. My sister, however, did not want anything to do with religion in her house. There was one time that I asked the missionaries for a CD of primary music for myself and my niece to listen to. I brought it in the house and my niece and I would listen and sing together. One day, my sister came home and found me listening to the songs with her daughter, which was a big problem because it was religious music. After that, I went to church, and kept everything religious outside the house. I could not have anything to do with religion in the house, even the Book of Mormon, or talk about religion in the house. I was the only member in my family for a while. After time, my brother was baptized, but went inactive. This was all very difficult at first, but I dealt with it because I felt as though the Lord had really blessed me.

How did your life improve from that situation?

I met my husband, who lived in Utah. I decided to move to Utah, which also made my sister very upset.  She did not talk to me for an entire year because of this. I never resented her for it and always loved her.  I understood their situation. I could not accept it, but I understood. I know my sister was concerned, and I hoped my love for her might soften her heart and help her accept my decision and my religion more.  When I got to Utah, I was living in my boyfriend’s house with his family. His mom let me let me live there for a while until I got a job, and I was able to rent a room. A year after my baptism, we were sealed in the Timpanogos temple.

I know my sister was concerned, and I hoped my love for her might soften her heart and help her accept my decision and my religion more.

Through this, my life changed completely.

When we married, my husband began college to study engineering. It was a difficult time for us. I was cleaning houses to pay for rent. Since my husband was an international student, he used his free time to work to pay for school. The Lord always helped us, even though I did not earn much for cleaning houses; there was much to be gained. My husband would always say, “We will not go without if we pay tithing.” And it’s true. At the end of the month, our money was always divided for tithing, and we still had enough money to live. We were never left wanting. We never lacked money. We could always pay all of our bills.  Sometimes even enough to go to buy ice cream at the BYU Creamery. This time was a very beautiful time for us together.

For this, my life completely changed.

At the end of the month, our money was always divided for tithing, and we still had enough money to live. We were never left wanting.

We continued to struggle. My husband started his Masters degree, also in engineering, and we had our first daughter. And then from there, he worked hard enough to get a job in the transportation department.  It became easier because he could work a little more and was paid a little more as an engineer. That’s when we moved to the apartments by BYU, and it was a very nice time for us.

What does the church bring into your life now?

In church, I always got called to the primary, and now I was just called as president of the young women, and to me this is a very big challenge. Young women are easy, yes, but I’m learning what it is like to be a girl in today’s world. I have my little girl, and this helps me a lot because I like to help my daughter grow.  Also times have changed, and situations today are difficult. I have learned that you have to accept the Lord when He calls you because he knows you. With sacrifice, one learns what He has to teach us.