His, Mine, Theirs, Ours

I had three daughters with my first marriage and when that ended, I sort of thought about possibly having more if I remarried. Fast forward eight years as a single mom, I felt that ship had sailed and had no desire for another baby. My girls had suffered tremendously from the abandonment of their father and we were a close little group. I then married an amazing man who had no children and was more than thrilled to be their father. I warned him that I had no intention of having another baby. He loved us so much, he was willing to forego having his own biological children to be my husband and father to my girls. He has an eternal perspective on life and reassured me that he knew this was the family he was meant to raise.

Something changed shortly after we were married and I felt sure there was another waiting to come to us and he felt the same. Due to my age (43), my doctor recommended some testing. Results showed extremely low egg supply and I was told we had less than 1% chance of conceiving. We prayed about fertility treatments, but I really felt like if it was meant to be then it would and if not, then I would feel at peace with that.

One month later I was pregnant with our fourth daughter. My older girls were devastated! The trauma of being abandoned by a parent runs deep. They were 14, 10 and 7 the last time we saw him and they are 20, 16 and 13 now. They were not happy about the marriage or the baby as they felt that I also was slipping away into a new life. You can probably guess what happened when their baby sister was born. We all instantly fell in love. She is his, mine, theirs…ours. She is the glue that binds us all together.

When I try to think of another one, I am also reminded of the toll it took on me physically. I had gestational diabetes, sciatica, inflamed Plantar Faciatis and knee problems from the extra weight. I am still fighting some of these conditions a year later. Isla is a gift and answer to a mother’s prayers to somehow mend the broken hearts. She is meant to be in our family, but I know that we are now complete. 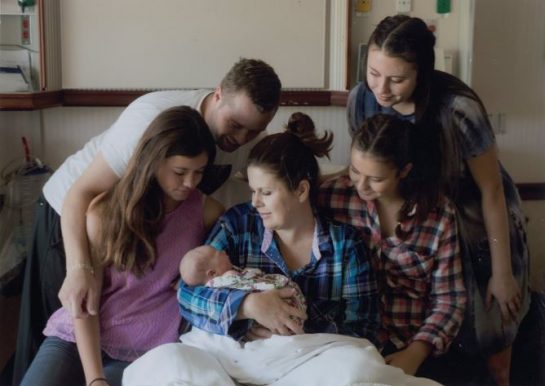 Lisa and her family