By Larae A. Merritt

Because my mom was an “older mom” (I was the ninth of eleven children), I wanted to have all my children by 30. I had five by 28! Ever since baby number two, I had felt we would have another boy, but our third, fourth, and fifth were girls.

When I turned 30, I asked my husband if he was up for one more. He said,”Absolutely not! We are done!” I reluctantly agreed, figuring I had just been wrong about my feelings. A few months after my 35th birthday I found out I was pregnant. I was absolutely devastated! I was going to be an “old mom.”

It was the hardest pregnancy I had ever experienced. The thought of it being the boy I knew was waiting kept me going. At 20 weeks, we went in for the ultrasound. She put the wand on my belly. The first image that appeared told us it was a little boy! Usually, my babies had to be coaxed to show us. I lost it right there in the room! It was like a big hug from Heavenly Father telling me everything was the way it should be. There’s a seven and a half year gap, and we are often asked if he’s our last. I have complete confidence in telling them, “Absolutely!” We have a four-year-old amongst teenagers, but he honestly has been the best thing for us! He reminds us of the fun, happy things. Definitely what I needed. 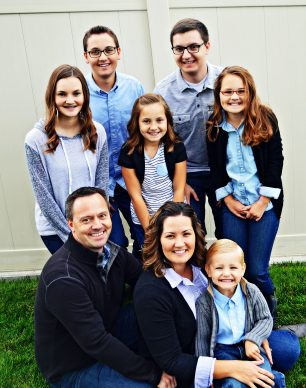 Larae and her family