Acceptable to the Lord

As a young girl, I always wanted to have five children. As I entered my late 20s and still wasn’t married, I came to grips with the fact that I likely wouldn’t have five. I’d settled on having three by the time I married at 31, and my husband was in agreement with me.

When we’d been married about five months I had an urgent feeling that now was the time. My husband and I talked and prayed about it and we both felt good about moving forward.

I conceived immediately and was over the moon. About six weeks into the pregnancy I knew something was terribly wrong. I had pain on one side and I suddenly stopped “feeling” pregnant. The news was the worst—I had an ectopic pregnancy. I was devastated. Was the prompting I had to get pregnant even real? Did I do something wrong?

About 18 months later, I gave birth to our first child, a healthy baby girl. Exactly two years later, another healthy girl followed. I was 35 at the time and had gestational diabetes with both pregnancies, but still felt like I had one more in me.

One year later, I had a miscarriage immediately followed by another ectopic pregnancy where I lost one fallopian tube. We still felt like there was another child. We kept trying to conceive, but we just weren’t having any luck. Two and a half years later I still wasn’t pregnant and then my husband was diagnosed with prostate cancer. Because he was so young, his doctor recommended an immediate radical prostatectomy. He would be sterile after the surgery, so we consulted with a fertility specialist and decided to try IUI. It was successful, and I found out I was pregnant the day of my husband’s surgery. I found out I had miscarried at 14 weeks.

The following year was bad. I really felt like there was another child to be in our family, but I also felt out of options. We had banked enough sperm to do one round of IVF, but where would we come up with the money? My husband felt like our family was complete and wanted to sign the order to destroy the banked sperm. I just wasn’t ready. When Elder Renlund was called to be an apostle and I heard about his wife’s story, I started to feel comforted. Specifically, I felt like not having a big family was acceptable to the Lord. And then one day I stopped feeling so broken. I told my husband to go ahead and sign the papers.

I still remember the dates of my losses and mourn. I hear a friend is pregnant, and I mourn that I won’t ever be pregnant again. But I feel at peace with my husband and two daughters and feel grateful for them and confident in the knowledge that my worth is not tied to how many children I have. 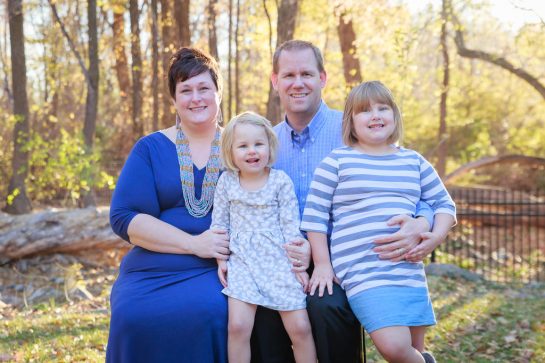 Jennifer and her family