The end snuck up on me. I had dedicated a decade of my life to parenting, which included my three birth children and a foster son of more than two years. I found myself in the hospital on a snowy February morning giving birth to my fourth child. Labor was quick and he came sooner than I expected. As soon as he was delivered and laying on my chest, tears began. I never cried when my other children were born. But I wasn’t crying out of joy or excitement for this new babe. I wasn’t crying because of the physical pain that comes with unmedicated birth. I was crying because I knew, instantly and deeply, that I would never be pregnant again.

Actually, I guess the end wasn’t as sneaky as I sometimes claim. The signs were all around me. My husband had declared that five was enough. Four birth children and one foster son we were planning to adopt filled up our house. My body was getting tired of pregnancies. Being pregnant at 23 was very different than being pregnant at 32. My kids were becoming more demanding as they got older. One child had serious speech issues. Our foster son had a whole host of issues that occupied the vast majority of my time. The oldest were involved in sports and dance that took increasingly more time.

We were feeling stretched and more stretched as my belly grew with this fourth pregnancy. I had always imagined myself having six or eight or ten or even twelve kids. How could I be done now? My assurance that the end was here and that the end was necessary came slowly over the three years since the birth of my fourth. Little moments where I knew this was it and this was good. First came the heartbreak of losing our foster son. So now, not only would we not have the twelve kids I had envisioned, we wouldn’t have the five kids in my home. We would only have our four birth children.

Only. Only. To a lot of people where we live four seems like more than enough. But to me four seemed like less than half of what I should have been having. Wasn’t I capable? Wasn’t I strong enough to do this? Wasn’t I good enough? My dream had always been to imitate my favorite childhood book, “Cheaper by the Dozen.” If I wasn’t a mom to two handfuls of kids, what was I?

I began to explore what my strengths were and what my dreams were and slowly life after the end came into focus. I have loved being home with my kids. I believe it has been a gift to me more than it has been a gift to them. I will always treasure those moments snuggling my newborns, chasing my toddlers, going on adventures and just being there with them, but I’m ready for the next stage in my life. And I’ve rediscovered that there’s more to me than being Mommy. I’ve started chasing a new dream. This dream doesn’t stop me from being a mom, but it does open up new facets and dimensions of myself. I have felt reinvigorated and reenergized as I have remembered my other skills, dreams, talents, and visions. Like so many things in life, I discovered that the end was really, after all, a beginning. 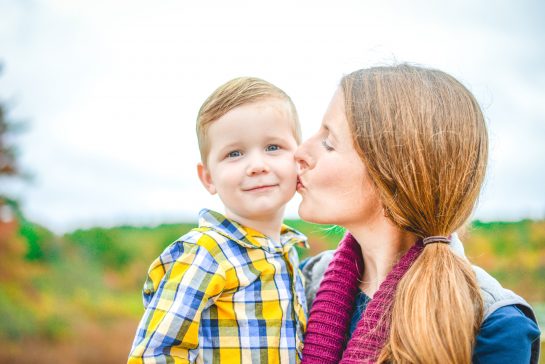 Maria and her son