Our first daughter joined us rather unexpectedly, a month early. Aside from some minor drama and unanticipated excitement surrounding her birth, everything went well. She caught up in her growth very quickly, and brought us great joy.

She was a very temperate child, gentle and mild-mannered. She didn’t go through “terrible twos,” or even a threenager phase. My husband and I often joked that we couldn’t have another child, because she had spoiled us so much, that we would only have an uphill battle from there. After joking about this for long enough, I began to believe it. I could be happy with just one easy child. That would be okay.

My husband (who first made that joke) realized he had planted a seed that wasn’t meant to grow. He began trying to convince me that we weren’t actually done. It took probably over a year before I was ready to admit to myself that even though I was scared of trying to manage two children, I knew that our first wasn’t our only one. Neither of us had that nagging feeling that we had another child specifically waiting for us; we just weren’t comfortable stopping at one.

We were fortunate with both pregnancies to conceive on our first attempts. I was soon pregnant with our second, and though we were both excited, I struggled to connect with that baby. She felt like a fetus, not a baby; I might as well have been a surrogate. I found myself frequently annoyed at her constant movement and my resulting discomfort. As I headed into my third trimester, I finally admitted publicly that I wasn’t excited, and wasn’t connecting. Several friends empathized with me and thanked me for sharing. By the time our second daughter arrived, I was happier and more excited. I just took a longer way around. I quickly fell into a postpartum depression, though (I already suffer from Major Depressive Disorder). My husband and mother-in-law recognized it within 36 hours after delivery, but it took me about five weeks to realize it. I started taking medication, and gradually adjusted to life with two children.

Before this second pregnancy, we had known that we knew we would be done with only two or three children. I secretly hoped I was having twins, because that would make the decision an easy one. She wasn’t twins, so it took me longer to understand when we were done.

One day, when my baby was around seven months old, I was working at the computer while she was under her play gym, my four-year-old playing with her. I became distracted when I heard them both start giggling. I pushed back from the desk to watch them for a moment, unbeknownst to them. I watched for about 30 seconds when I was overwhelmed with a feeling of intense contentment and peace. Though I hadn’t thought about family size in months, I knew in that moment I was looking at my whole family. We were complete. 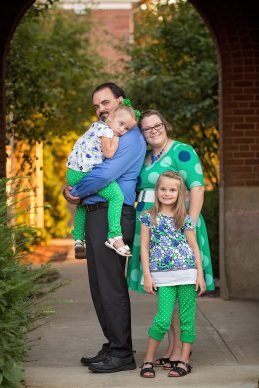