Despite that Eternal Promise

My dance with infertility began as a teenager when we found out I had a blood disorder which could prevent me from carrying a baby to full term. I think it was Heavenly Father’s way of preparing me for what I had to go through to start a family, and for which I am grateful. Fast forward to 2012. My husband and I had been married for just about a year and decided we were ready to try expanding our family. I remember the excitement and elation and now, the naiveté.  I remember being taught in health class that you get pregnant when you have sex, like it was so easy. But after months of trying I started to feel something was wrong.

I had people tell me not to give up and that it can take up to a year or two. I prayed together a lot during those months, and eventually started fertility treatments. My faith started dwindling because I just knew I was supposed to be a mother—it was in my patriarchal blessing. I started getting angry with God. At the beginning of our “expand the family” process I had become a temple worker. There were so many weekends I found myself sobbing in quiet corners asking for the comfort of knowing it will happen in His timing. There were many bittersweet moments seeing families sealed together, and I kept beating myself up. Will it ever be us?

In September 2013, we learned that my fallopian tubes were not functioning the way they should and in vitro-fertilization would be my only option for childbearing. I thought I was prepared for the shocking blow this gave me. I thought Heavenly Father had prepared me as a teenager, but finding out your body does not function the way it is supposed to is still enough to question your womanhood. I struggled with my faith, with my marriage. I was so sure my husband would leave me to marry someone who could give him biological children. I was so angry at God for the struggle He gave me. The ironic part? I didn’t even care that much about pregnancy. Giving birth was never a deal-breaker in how we were going to start a family. But being told “you can’t” is a shocking reality.

We decided to begin the adoption process. We went through months of incredibly emotional emails. We prayed over women we had never met. We had to learn how to guard our hearts. Until the last email we received came in August 2015. She said all of the right things, but we still remained slightly detached. I could not handle another emotional blow so quickly. Over time I know He softened my heart and gave me the comfort I needed in order to enjoy the process with her and then I fell in love with this woman, my heavenly sister.

In April 2016, our daughter was born. The emotional aspects of her birth still leave me speechless. I remember being in the room, assisting the doctor as she was delivering. And although having her placed in my arms fulfilled the biggest desire of my heart, it did not heal the brokenness which I continued to feel. At this point we were still just overjoyed and were savoring every possible moment we could with this amazing little angel. The thought of more children was put on the backburner.

Then only seven months later, I ended up in the emergency room with intense abdominal and pelvic pain. We found masses in my abdomen, one as big as a softball, had grown and were now squishing everything inside of me. I was prepared for the gynecologist to tell me he could remove the masses and that would be that. I was not prepared for him to tell me he had to perform a hysterectomy. The masses had all but destroyed my ovaries and uterus. They were of zero use to me anymore. But they were not of much use before, right?

I kept trying to remind myself pregnancy was never a deal-breaker in our plan, but that does not lessen the blow. Before I had to accept the fact that we would need assistance to bring a child into the world. Now I had to accept I will never be pregnant. The finality of the word still cuts into me. I went into surgery trying to be hopeful, but the following two weeks of recovery were harder than I could have imagined emotionally. I tried so hard to just find joy in my daughter, snuggling with her and loving on her. I remembered the amazing gift of adoption and how we could still be a forever family sealed in the temple. But even despite that eternal promise, my temporal wounds are still not completely healed and I cannot say if they will ever be.

At the end of the day, there are no childbearing years for me. There never were in Heavenly Father’s plan, which is something that will continue to take time for me to accept. 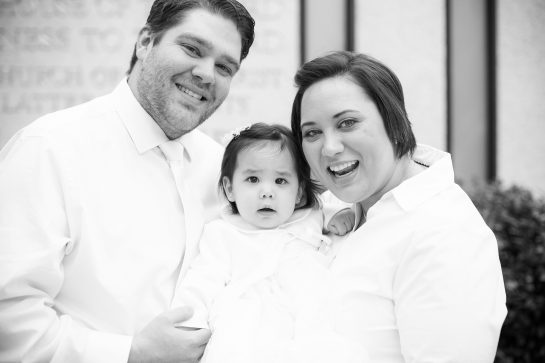 Nubia and her family