Every Ounce of Our Best Effort

There I was in the doctor’s office looking at a monitor confirming a quintuplet pregnancy. After years of infertility during which I spent every spare minute thinking about having babies, it was unbelievable to all of us, including the doctor. It sadly didn’t end well. The babies were born at 21 weeks gestation, and passed away one by one. My husband and I were devastated, but we knew we wanted to try again—this time in a much more controlled way.

People hear quintuplets and always ask the same thing, “How many embryos did you transfer?” (It didn’t help that we got pregnant the same year as Octomom.) The answer was none. We had used a procedure called IUI, not IVF as was assumed. The main difference is that the eggs never leave your body with IUI. We were told we could have a chance at multiples but only one egg was measuring mature when we completed the procedure. Thus the surprise.

We went on to have three successful pregnancies and one miscarriage with IVF. We were extremely cautious, only using one embryo at a time. Even that resulted in identical twin boys after the embryo split during what would technically be my fourth pregnancy. They were preceded by a daughter and followed by a son. The miracle in all of this, besides my children, is that my husband was working for a company with an insurance plan that covered IVF four times in a lifetime. That kind of coverage is unheard of in most companies. I know the Lord provided a way for us to have the children we so desired, knowing we would struggle. There was plenty of work to be done on our end. Shots, three-hour drives to and from appointments, sickness, and premature twin babies born at 30 weeks. Choosing to use our last covered round of IVF was a difficult choice after the twins, but I knew we had to try.

During my last pregnancy, we told each other that as soon as he was born healthy we’d be done having kids. There is one remaining frozen embryo in DC. Every child we have was a frozen embryo from the first round of IVF that brought us our daughter—seven years ago next week. All of our kids were conceived the same day and are technically the same age. Wild.

I told my husband I couldn’t make any decisions during the postpartum months, so once again we paid the frozen storage fee that we have paid (and it has gone up) each year. My baby turned one and I said, “He’s such a good baby, maybe we need one more.” But as my baby grew, so did my other children. Their needs changed. They had more individual desires and specific things that needed my focus. My husband went back to school. My daughter went to Kindergarten. And my twins, one of whom has Cerebral Palsy, started going to preschool. Life became increasingly busy. I became a mean mom. A stressed mom. A constantly-at-my-wits-end type of mom. And I didn’t like it.

The time came and went when I would normally start the IVF process again. It was weird not to be trying. It still feels painful knowing there is an embryo frozen that is a chance at life. I know not every embryo becomes a baby—I had an IVF miscarriage after my daughter. But when you have Hypothyroidism, Hashimotos, and PCOS you don’t have many chances at making life. And though I’m sick the entire time, have a low platelet count, premature deliveries, and other issues surrounding delivery, I still love feeling a baby move inside me and I adore nursing. I love babies. All the babies. I’d take them all. I think that’s why we were blessed with Quintuplets first. All the little spirits that need a body, I’ll take them. But I also love my kids who are here. The ones who need me, whole and healthy, to help guide their days. And so it became a quality over quantity choice. We could go for one more, or we could pour every ounce of our best effort into the ones we have.

In truth, I feel like Heavenly Father listens to our desires and wants us to work it out. I feel like I have been given the opportunity to say, “This is what I’d like to do.” I have received a sweet and peaceful response—not a yes or no answer. Just feelings of love and a desire to cherish and be better for the children I have now. We have decided not to pursue having any more children through our tried and true path of IVF, but that doesn’t mean that we’d be upset if things fell into place for us to conceive naturally one day. I’m not counting on it, but Heavenly Father knows we are open to it and that is all that matters. 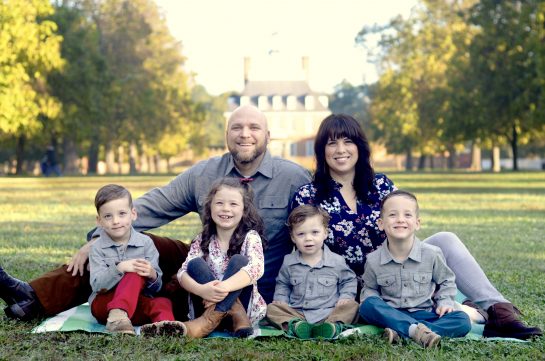