I Gave the Lord a Deadline

My family was complete after I gave the Lord a deadline.

My husband and I started trying to conceive about two years after we got married, when I was 24 years old. After a year of no results, a fifteen month military deployment, and another nine months of trying, I became pregnant with my little boy.

When he was about a year old, we started trying for another baby. After a couple of years and several fruitless folk remedies, I went to a fertility clinic and we did a bunch of the usual diagnostic tests to see what was holding things up. They never did find anything definitive, but I was prescribed a low dose of Clomid. I took a mental health break after four unsuccessful rounds. Before I started on the fifth round, I decided that the emotional roller coaster had to end. It was now or never. Luckily, that fifth round worked and we had a little girl, just over five years younger than her brother. We had pretty well decided at that point that enough was enough. The monthly failures had taken their toll on my heart and I knew I couldn’t go through all that again.

I had always had sort of a mental “finish line” of 37 years old, only because that’s when my mom had my youngest sister. When I started creeping up on 37 and my daughter was four, I started to wonder if we ought to give it just one more shot. My husband was completely happy to have two children and I knew he wouldn’t be super excited to hop on that crazy-making train again, so after a lot of thought and prayer I asked him if we could just give it one year. I felt like I could emotionally handle just 12 months if I knew there was a hard deadline. I talked to God and respectfully requested that if we were supposed to have another child, he’d better make it snappy. That last year was a casual effort with no medical interventions and I very consciously didn’t set my heart on another baby. When the twelve months were up, that was that. The door was closed and I was okay with it. 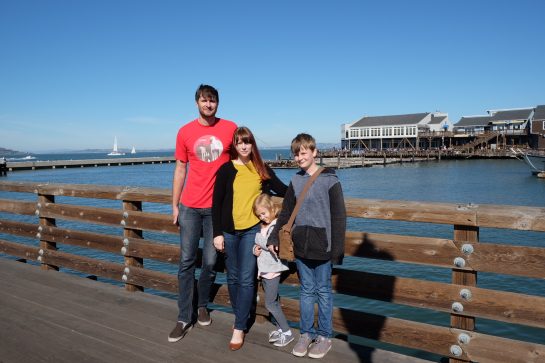 Colleen and her family