After our fourth child was born, I felt there was room for one more pregnancy in my body. My husband, however, felt that we were done. After a year, we felt the need to pray about it, but before that, I needed to be willing to hear, “No more. You’re done,” and my husband to hear, “Yes, one more is waiting.” Otherwise, we were not going to hear what Heavenly Father would tell us. It took some weeks, but then we were ready.

After a couple of nights, my feeling just went away. “No more. You’re done.” A peace came over me and us.

I’m so grateful to my Heavenly Father for the concern of my health. I didn’t know then, but some time later my back started to give me some serious trouble. Some days I couldn’t get out of bed. I realized that if I had pursued my own wish of having another child I would have had, on top of everything else (Taking care of four is a lot of work! Puh!), a baby to take care of when my back was causing me so so much trouble.

Since that night of peace I/we have never looked back. Thankfully my back is much better these days, but we have both felt and seen the Lord’s hand in our decision so many times. So grateful. 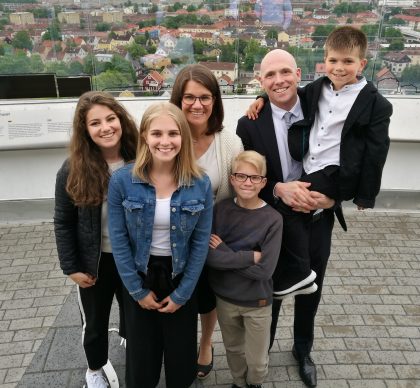 Helena and her family

When my husband and I married, we wanted at least four children, spaced two years apart. Between Kid One and Kid Two, we stayed on track, but we were forced by circumstances into ending the plan—not because we came to a conclusion like, “They’re all here.” Quite the opposite. My second child arrived in the world with severe disabilities. After that, I didn’t know whether I’d have another baby. When she seemed to stabilize somewhat around seven years old, I was 40. Nevertheless, my husband and I decided to go for it. Our third child was born two weeks before I turned 41. It was a difficult pregnancy, hard enough that I decided, “This is a young woman’s game. Can’t do it again.” Besides that, providing care for an infant and a fully dependent seven-year-old took its own toll.

Still, for years after, when I spoke to my three kids or called them, names in a row—to  pay attention to something or, for instance, to “come eat”—there was always something I’d characterize as a shapeless or empty name for a fourth child trying to form at the end of the list and tip of my tongue. It happened over and over and always brought me up short in a stumble of muteness. Years passed, and that ghost of a name gradually stopped haunting my mouth. But I never felt my family was complete. I only resigned myself to the fact that my childbearing years were over. 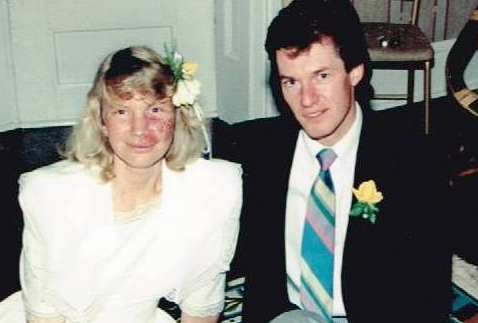 Patricia and her husband

I was diagnosed with lupus after my third child was born. We thought, then, that our family might be complete. We were blessed to have three more children as my health stabilized. Before my final pregnancy we realized that my age and lupus meant it would be my last pregnancy.

I was so grateful for the opportunity to bear the children I had, I didn’t feel very sad at ending that process.

As I contemplate my future, I am content with my family and the work I have done and am doing as a mother. 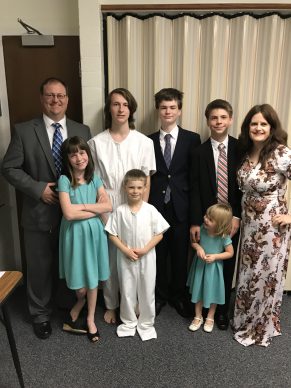 Tiffany and her family

When I had my second to youngest, S for short, the whole pregnancy I was content to be done. We had our four that we always wanted and it was the two boys and two girls we said would be perfect. As I sat in the hospital room, hours after her birth, I just knew there was one more meant for us. My oldest is an older child adoption and I always thought it would be neat to adopt another child, so they could have that special bond. This time, I wanted to bring the baby home from the hospital. I just didn’t expect it to happen six months after S was born! About six months after that, I had one of the days where I just knew that eventually he, our youngest, would be ours forever and it felt right. Two years later, the adoption was finalized and we never felt that desire to have another child.