After my second marriage, when I found myself shepherding both my biological children and my bonus children through life and I realized getting a dog sounded better than having another baby, I knew I was done. There was a completeness that hit me when my stepkids entered my life. I didn’t need more. My family was just right.

We already had three boys, when we felt we had to have a fourth one. We were happy to find out that another boy would join our family. Once he was here, it just felt as if our family was complete. I feel so happy now to move on and focus on my boys growing up. I am excited for all the things that will come ahead. I am grateful for those beautiful years of pregnancies and little babies at home, but I feel so strongly that our family us complete. That’s what I tell my kids when they ask if we will have another baby: We are all here. No one is missing.

I felt very complete with three but wondered if that was “right” since many in our faith tend to have more than that. Both my husband and I prayed and felt total peace that we were done and the Lord was pleased with our family.

I knew my family was complete when my two year old was diagnosed with Autism and I was pregnant. Even if the second child didn’t have Autism too, I knew the one I had would need extra attention. I felt we owed him the very best we could give him. Having several more children would either deprive him or them of the proper level of attention. It was not too many years later that my uterus failed and I almost bled to death. One year later, both my ovaries had to be removed. It only confirmed to me that we had made the right decision earlier. My life could have been endangered if we had tried to have another child.

We have since learned that my husband and I, and my older children from a previous marriage, are all on the Autism spectrum. So we made the right decision. Even if we had been able to have more kids they most likely would have been on the spectrum and there is no way we could have handled them. I have always felt like the feelings that I had were the whispering of the Holy Ghost. We both knew we had made the right decision and we have never regretted it. 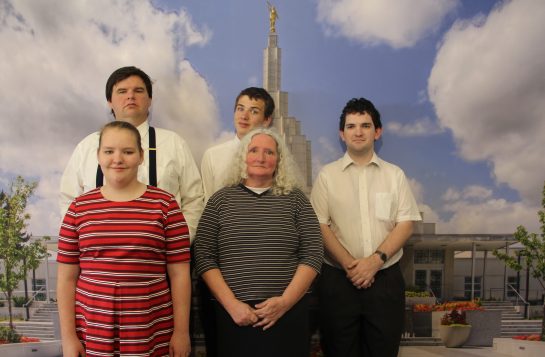 Athena and her family