I was for sure done after four, thinking that was a nice number of children to have. However, four years later I had a clear impression that we needed another child (number five) and the door of childbearing was again opened, which eventually led to a sixth child. Because physically my body hit a done button, I felt we were done having children—not Heavenly Father’s plan. In the temple my husband and I both had an impression that our family was still not complete and that we needed to adopt a sibling group. Crazy, overwhelming, and scary. It took us four years to build a house and another year to finally get a sibling group of three which brings our total to nine. I could not imagine life without my younger “fab five” group. So thankful for the whisperings of the Spirit that brought them into the family. 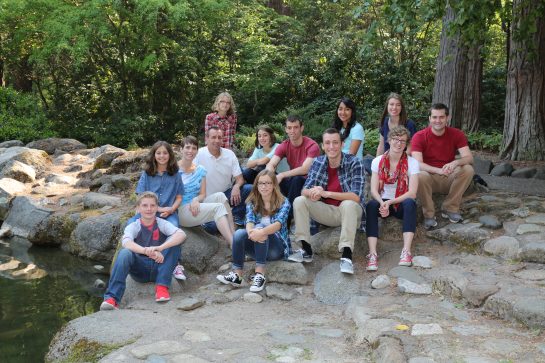 Ann Ebert and her family

We had two children and thoughts of having a third child kept coming all the time. I knew we were not done which was a little bit of a struggle for me because I was so comfortable having just two children. So when I was pregnant with our third child, I was worried that the thought of having a fourth child would come after. But the birth of our third child was horrible so I received my answer right there. No more, never again! So even today almost three years later I never think of having a fourth.

I didn’t think I’d ever be able to say that I was done having babies. After 6 c-sections (the last one being a little scary), the doctor was adamant that I not have any more kids. He already advised stopping after c-section #5. We adopted our next child through foster care and then I unexpectedly got pregnant with child #7 (c-section #6). We still talked about more children.  I wanted to adopt another child. However, we were honestly, completely, and totally out of room in our tiny house. We decided to wait 3 or 4 years until our oldest left home and then maybe start foster care again, with the idea of adopting. However, over those few years my children grew, and when we got to the point that we could have started looking at adoption again, we just knew we didn’t want to start over once more. The longing had passed and I realized that I’m actually exhausted and OK with the kids we have. I never thought I’d say ’no’ to another baby, but I’m done. There are times when I think about adoption/foster care again. Sometimes I see children who need homes and I almost think I can do it. But I have my own kids (including special needs kids) who already take up all of my time and attention. We just can’t add more to the mix.  And—my oldest is 20. I’m not that far away from grandkids now. I can satisfy my baby addiction with them.