Between four healthy babies and several miscarriages I still had the yearning for another baby. I even named her Briony Judith. My specialist strongly advised me against another pregnancy and then nature made the decision for me. I had to have a hysterectomy, and so my little Briony didn’t come to join our family. For quite a few years I made up seven plates instead of six. Strange how our hearts miss things and babies that didn’t happen.

I wanted more than two children and even felt incredibly guilty for a long time after having a hysterectomy when my youngest was two. Years and experiences proved that this was the right number and I was able to let go of the guilt. After I let it go, I had an experience in the temple confirming that our family was just the way it was supposed to be. A friend who had six children laughingly told me when she was pregnant with her seventh, she was having the ones I didn’t. If she had said that before I would have been crushed, but now I could happily laugh with her.

I knew I was done when I was pregnant with our fourth, and the thought of this being the last time made me happy. We were on the fence before the pregnancy about adding one more child, and gave it a three-months window for things to happen or not. Then after our fourth was born, there was never a moment where it even crossed my mind to have more. The wish or even the question of whether we should have more completely disappeared. I just felt done, and felt happy about it, where previously there was uncertainty, questions, wondering and feeling a little sad at maybe being done.

I’d be horrified at this point to suddenly find myself pregnant somehow. Although we are open to fostering teenagers down the road, we are absolutely done having biological kids! 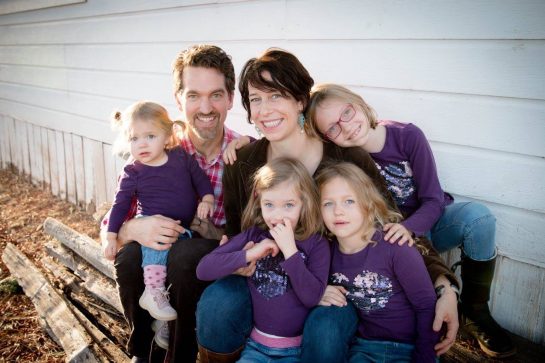