I gave birth to our first son at age 21. When he was three, my husband became very sick and was diagnosed with multiple sclerosis. I had always felt like our family wasn’t complete with just one child, but the future had become painfully uncertain. I just didn’t know if we would be able to handle having another child with the challenges we had.

My husband’s health thankfully began improving, and we were able to have our second son when I was 27. This second delivery was a tough one. My son was posterior, so his unmedicated home birth delivery was, shall we say, very challenging. I had also struggled a great deal with depression and anxiety throughout that pregnancy. The anxiety began in childhood and the depression in young adulthood, and they, unfortunately, seem to be my devoted companions for life.

I remember standing in our kitchen a few hours after the birth, so in love with my new little boy, but frankly, very traumatized from the experience of getting him here. And that’s when I had the impression, “It’s okay. You’re all here now.”

I was still young and so I didn’t want to believe that impression for several years. I was also feeling cultural pressure, whether real or imagined (probably both), about having a larger family. I thought that we weren’t “good enough” with only two children. But I eventually kicked those beliefs to the curb and accepted the impression that had been given to me years before. It was so sweet to finally embrace the knowledge that God loves my little family just the way we are and that it’s 100% okay for my husband and me to spend energy that might have gone into having more children on keeping ourselves as healthy as we can for the amazing two children we have. 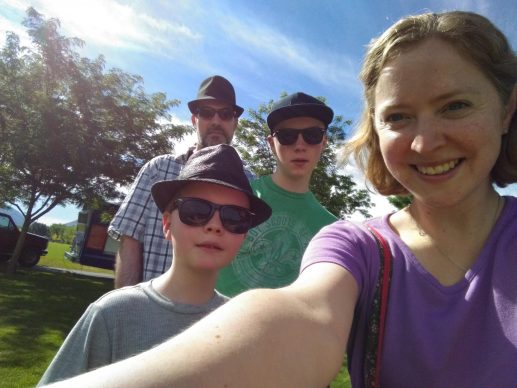 Jenny and her family