Grateful for the Eternities

I am a 42-year-old mother of four boys, but they are only four of the sweet spirits who survived the journey. I actually have nine children.

I was born in 1975 with a birth defect known as Bladder Exstrophy. All you need to know about it is that it involves your bladder and kidneys and is now easily treated at childbirth. Due to this condition, I also have Hydronephrosis (hardening of the kidneys), so I wasn’t even sure I could have children.

Cut to me being an inactive, very rebellious 18-year-old girl with a longtime boyfriend. We found ourselves pregnant and terrified. At three months, I had my first miscarriage. There were tears of both sadness and relief. We realized that we were better off as friends and then I met my husband, Nathan.

Nathan and I waited to have children and by Utah standards, were kind of late bloomers, but once we decided it was time, I quit the pill and was pregnant the next month. Three years after my first was born we tried for our second with exactly the same results.

Number Three was supposed to come on schedule—every three years. When that didn’t happen, we did what you do and were tested and nothing was wrong. We went to a fertility specialist and then to the temple. At the temple, I felt I got an answer of “focus on the ones you have.” I did and a few months later I was pregnant with our third, but in the years in between, I had two miscarriages. We were devastated.

Nathan was done, but I wanted a girl desperately. I was convinced if we had one more it would be our girl. So we tried and got pregnant pretty quickly, and then lost it. Pregnant the next month and lost that one too. Nathan started to think it was a sign we were done, but I kept persevering and we were pregnant the next month with Number Four…I couldn’t imagine a worse pregnancy. I assured my husband we were done. I was done physically and emotionally.

Who was to know that the end of my pregnancies would be the beginning of much more heartache? My son had three congenital heart malformations. He had open heart surgery and it almost broke me. The last piece was finally there and I was now done spiritually as well.

It is a bittersweet feeling. I both loved and hated being pregnant and to have that time and season pass is sad. I shared in the amazing blessing of creation. I felt closer to my Father in Heaven and leaned on him for comfort constantly.

I am so grateful for the eternities. For the blessing of knowing that I will have an opportunity (given I am worthy) to raise those babies I lost, and to be able to create many more. 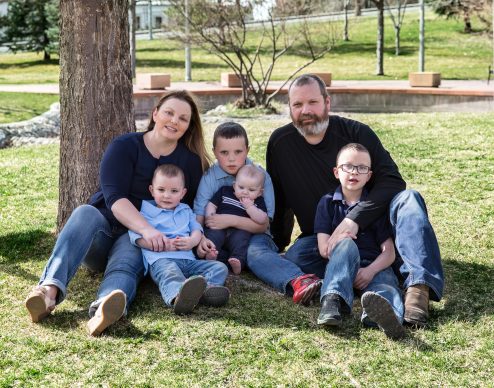 Heidi and her family