Looking Forward to the Next Phase

I always thought I would have three children. I didn’t particularly want three children, I just felt that’s how many I would have. I married relatively late (for an LDS woman, at least) and had my daughter at age 29. My son was born two and a half years later. As he was growing, I started to realize that my daughter had some delays and issues. Her toddlerhood was difficult. Both births had been hard on me physically, and my daughter needed so much attention and care that I thought maybe it would not be a good idea to have another baby. Once I made that decision, I felt so relieved that I wouldn’t have to go through the discomforts of pregnancy, childbirth, and dealing with a newborn again.

Shortly after, my husband got a new job in another state. He had to start right away, so I was left to prepare to move across the country. I had been pregnant or nursing during our previous moves and this time I was grateful not to have to worry about that, at least. A few weeks before we were due to leave for our new home, I was taking my children somewhere in the car. I looked back to check the rear window and saw both of my little ones sitting there in their car seats. Suddenly a thought came to me: “Where’s the other one?” The impression was so clear and strong that I felt for a second that I had somehow left one of my children behind. At that moment I knew there was another child waiting for us.

It took several months for me to come to terms with that as we were trying to settle into a new environment and my daughter’s behaviors became more stressful and demanding. My husband said that he would be happy to have another child and just as happy with the two we had, so it was my choice. After a lot of agonizing, I told the Lord that I would give it one month. If I was meant to have another baby, I would have to get pregnant during that time. Otherwise, I would be a mother of two children forevermore. I immediately became pregnant.

As soon as my precious little boy was born, I felt that our family was complete and there would be no more children. I didn’t feel sad about it, just certain. He has been a joy, so I am very grateful that he came to us. As my body has been changing now that I am in my later 40s, I haven’t felt any regret or longing for one more. I welcome the end of my period and–though I wish I still had the smooth skin of my youth–look forward to the next phase of my life as a woman. 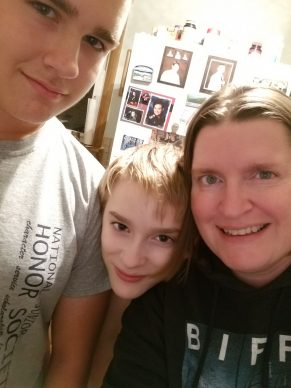