About a week before we were sealed in the Washington, D.C. Temple, my husband (Les) and I were praying together and I thanked Heavenly Father for any children we might be blessed with in the future. As I ended the prayer I had a vision of a little girl in a white dress. I began to cry and my Les asked me what was wrong. I told him I could “see” our little girl.

All of this was very vivid to me. I saw a little girl with blonde hair wearing a white dress. She was barefoot and behind a white picket fence. Behind the fence was a field of daisies. She was not alone as there was a man on his haunches smiling as she ran from him to the fence. Her smile was filled with joy and excitement. As she ran to the fence she would look back at the man (also in white) who shook his head “no” as if tell her it wasn’t time yet.

It was confirmed that the man in my vision was Les’s grandfather, lovingly known as Opa, when we went to see his parents and I saw a picture of Opa for the first time. He had died almost ten years before I had met my husband.

I even knew the name of the little girl. Her name was Marianna Elise.

Les and I had three children. The first was our son, Taylor. We thought for sure we were having a little girl because of what I had experienced and had a closet full of pink, frilly clothes for our new little one. Fortunately, I had bought a few boy outfits, just in case.

Our second child was a girl. But, she wasn’t Marianna Elise. I knew the moment she was delivered that she would be named Katie Ranee.

Our third and last child was also a girl. I truly thought she would be our Marianna, but again, I knew she wasn’t and so she was named Abigail Harp.

Before delivering Abigail I had two doctors recommend that I not have any more children. I had delivered all three via C-section and almost tore at my inner incision scar, and so my OB/GYN said it could be dangerous should I become pregnant again. My primary caregiver recommended I not have any more because of my severe depression. I could not take my antidepressants while pregnant and although I thought I was fine, those around me assured me that I suffered a lot throughout the nine months. Both doctors said it was our decision but that if we decided not to have any more, they would perform a tubal ligation when I delivered Abigail via C-section.

We were devastated and I felt sure that if I had a fourth, it would most certainly be Marianna. Les and I prayed and didn’t get an answer either way. Les told me that if I felt strongly that we have one more, he would support me throughout the pregnancy. Other friends and family told me that the depression was really bad and that I should go ahead with the doctors’ recommendation.

I distinctly remember that within seconds of delivering Abigail, my doctor asked, “Are we doing the tubal?” I don’t know if it was inspiration or what but I said yes. I cried when he snipped the first tube and said, “Well, there’s one tube that won’t be producing an egg.” I almost shouted to leave the other tube alone but I didn’t, and so both tubes were done.

Over the years (Abigail turned 30 in 2017) I have shed many tears that we didn’t have that fourth child. I have prayed to know why Marianna did not come to us. I’ve been asked if maybe Katie or Abigail was really Marianna but they weren’t. It’s been suggested that one of our granddaughters might be Marianna but they aren’t. Marianna was ours; mine and Les’s. I wish I had had the faith to conceive one more time. I believe that not only Les would have supported me and been by my side but that Heavenly Father would have blessed me as well.

There is a part of my heart that aches for Marianna but I have been so blessed with the three children we have. Two have served missions and all three have been sealed in the temple. Their testimonies are strong and they serve the Lord in numerous ways. I believe that Marianna will still be a part of our lives. I’ll just have to be patient for the answers. 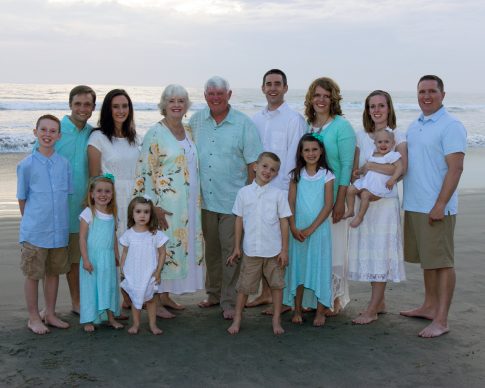