Some people use birth control to avoid pregnancy. We just didn’t move to a new house until we wanted another child. Every time we moved to a new house we got pregnant and before that, even if we tried, we couldn’t get pregnant. Even with our first child the pregnancy came after a move to the first home we owned and three months worth of fertility medicine. Three and a half years passed between the first child and the second. We moved to a new home and at last we were expecting. Another three years passed and despite not using birth control we hadn’t conceived.

My husband had a job offer across the country. I went with him to see if this would be a good place to move. I got pregnant with our first daughter on our trip. Six years went by in our new home. We moved to a condo and did not get pregnant. I joked that we needed to be in a house for it to work. We sold the condo and moved to a house with plans for a major remodel. Still no pregnancy. I joked again that we would get pregnant when it was completed. By this time I was 39. When the house was finally done, I got pregnant with our second daughter. Within two years my husband was offered a job back in Utah which he took. We got pregnant with our third daughter despite not actually moving since the job fell through shortly after when the economy tanked so he returned to his previous job.

We moved again a few years later from New York to Southern Utah. By this time I was 46. During our courtship we had agreed that we both wanted between four and six kids. We had five. But our neighbor had a new baby and she was as cute as our babies had been. We looked at each other and asked if we should have another one since we made such cute kids. After all, we had just moved. We agreed to pray about it separately.

I started to pray and ask if we should have another. Before I finished the question I got a definite “NO.” I thought it was a bit funny the way I didn’t even finish asking when I got a verbal answer. That night I relayed the experience to my husband and he laughed and said he too had received a definite “NO” before his prayer was done. We knew our family was complete so even if we move again we won’t worry if we should have another. 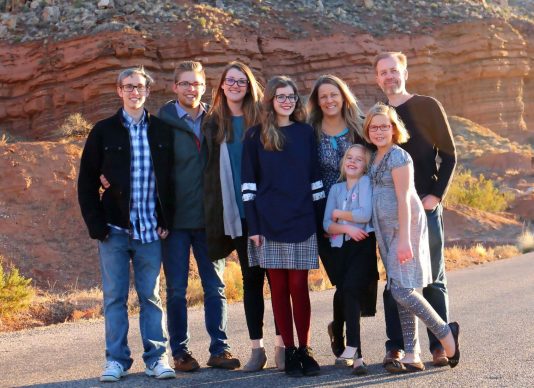 Sage and her family