Out with the Baby Gear

I was 31 when my husband and I married, and I felt an urgency to have our children right away and close together. I always knew during each pregnancy that another would be coming, like I was getting a spiritual preview. During my fourth pregnancy, we knew very clearly that there would be a fifth. I was wearing down. The idea of a fifth pregnancy made me exhausted, but I knew it was supposed to happen. When I was expecting number five, the thought of a sixth pregnancy filled me with dread. No more.

Additionally, as I went through five full-term pregnancies in seven years, the “pregnancy brain fog” got worse each time. All I wanted to do was sleep for nine months. It eventually became debilitating enough that I had to get a prescription for antidepressants. The last time, I was attempting to homeschool our kindergartener, manage the preschooler and toddler, and still nurse an infant while being pregnant again. I finally told my husband that I wanted to stop having children and start raising the ones we already had.

I have been so relieved not to experience any more pregnancies. As soon as my youngest outgrew the baby gear, it was gone. I couldn’t get rid of it fast enough. My daughters are now ages 11 down to 4, and this phase is so much nicer for me than the baby phase! I love raising our children with a clear mind and my own energy level that can (mostly) keep up with them. I love their independence, and that I can be independent with them! 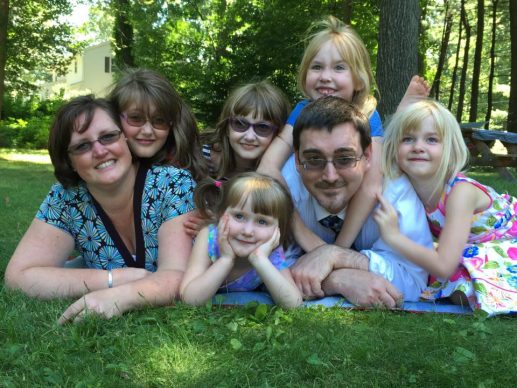 Trina and her family