I vividly remember sitting at my kitchen table pumping after I had my second son. I looked around the room and counted my two children. I counted them again and the number felt wrong. I was confident someone was missing. This happened to me many times over the years. I got pregnant again and then had a miscarriage. A few months later, I was lying in bed and I was overcome with the feeling that we had another little girl who needed to come to our family. I could feel her in the room with me.

I didn’t get pregnant right away. One day, my mom called and told me that as she was praying about me she felt a deceased relative tell her that I was going to have a little girl—that she was waiting to come down. I got pregnant a few months later . . . and it was a boy. I knew we weren’t finished. I knew someone was still missing.

When my third was seven months old, I got pregnant again. This time I knew from the beginning that it was my daughter. When we went to the ultrasound and we were told it was a girl, such a strong feeling of peace and completion came over me. I immediately knew her name and I knew that she was the one I had sensed. She is now five and my husband and I both feel that we are finished and that we are ready to move out of the childbearing years. It has been a bit bittersweet to slowly let go of the crib and the other baby things, but I am excited to see where our lives take us next! 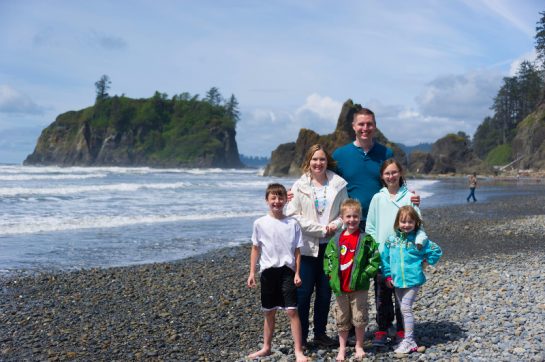 Rachelle and her family