Seven is a Good Number

I have never been baby-hungry or had a desire to have a big family. In fact, for much of my youth and young adulthood, I wasn’t sure that I wanted to have children at all. But twice I felt a calm certainty that it was time. I know it was the spirit speaking to me, and my husband felt the same spiritual prompting at the same time. Both times I became pregnant within a month.

The first time, we had been married for four years and I was in graduate school. I was content with my life, and starting a family was the furthest thing from my mind. Then one fast Sunday I got up from my morning prayer and told my husband, “It’s time to have a baby.” It was like someone else opened my mouth and said the words for me, but I absolutely knew they were true. My husband replied, “I just had the same thought.” I stopped taking birth control that morning, and three weeks later I was holding a positive pregnancy test. I actually enjoyed pregnancy, but when I went into labor the reality hit: I was about to become a mother! The idea scared me so much that I decided to just stay in labor for the rest of my life. Luckily my son didn’t listen, and I got a wonderful little boy who I grew to love wholeheartedly.

Two years later the spirit spoke to us again. I felt positive that it was time to have another baby. This time I actually looked forward to adding to our family, right up until the delivery. My daughter was born through an under-medicated emergency c-section. She was 9 pounds and footling breech, doing the splits in the birth canal when we got to the hospital. When I started going into shock in the operating room, my OB/GYN knew she couldn’t wait any longer. However, the epidural didn’t fully take effect until after the surgery, and I felt the whole thing. My daughter was born 35 minutes after we arrived at the hospital, and she was perfect. The surgery saved both our lives, but I felt like I couldn’t face another pregnancy after going through that.

I enjoyed motherhood. I was content with two children and didn’t feel anything was missing. My husband did, though, and two years later he said it was time to have another baby. Even though I was still nervous about giving birth again, I agreed to pray about it. I never received the spiritual certainty like I did before, so we didn’t pursue a pregnancy at that time.

By the time my children were five and seven years old, I was divorced (unrelated to wanting/not wanting more children) and engaged to a wonderful man who already had five children. When I asked him if he wanted more, he said he would support me fully if I wanted another baby or two. I asked him again, “But do YOU want more?” He replied, “I think seven is a good number.” The complete relief I felt confirmed that we were done.

We have been married almost twelve years now, and we’ve raised our seven children together. Four are grown, and we still have two left in high school; two are married; one has a toddler. I have never regretted not having more—my family is complete! 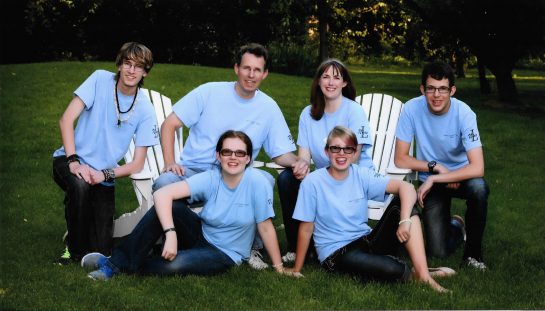