They Will Always Live at Home

My husband Jesse was the youngest from a large “yours, mine, and ours” family of nine children. While I was the oldest of only three girls, I also wanted a large family.

After we were married I got pregnant right away. Thirteen months later our first daughter Melissa was born, healthy and fine. Sixteen months after that we had another daughter, Suzie. At seven months we noticed she wasn’t reaching her baby milestones and she was hospitalized for tests. The doctors told us she was born without part of the cerebellum but they were 99% sure it wouldn’t happen again. Suzie needed lots of extra care with all her physical, occupational and speech therapy. Plus I was a little afraid of having another child.

I think my body also knew I was scared as I had to take fertility pills to get pregnant with our third daughter Nancy. She was born five years after Suzie. Then she too started showing the same problems as her sister—not gaining weight or reaching her baby milestones. She was also hospitalized for Failure to Thrive and had a feeding tube put in at seven months. This time the doctor said it must be genetic.

It wasn’t until the girls were eight and three-years-old that we were given a diagnosis: they had a rare disorder called Joubert Syndrome. This is an autosomal recessive genetic disorder which means both parents carry the gene and we would have a 25% chance of passing it on to any future children.

We thought about adopting through church services but from our understanding since we already had three children we would only be able to adopt a child with special needs. We figured, well we can do that ourselves and knew what we would be getting into.

We fasted and prayed and received blessings that we would be able to have more healthy children.

Four years later when I was pregnant with our fourth child, our son Jesse, I was at a doctor appointment with one of my daughters at a special needs clinic in Phoenix. The pediatrician there seeing me very pregnant asked me if I had heard of birth control. Little did she know that I again had needed fertility pills to get pregnant. She wished me good luck. Jesse was born healthy. I was still nervous until he started gaining weight, rolling over and sitting up—milestones his sisters had struggled to accomplish.

We again fasted and prayed and had another daughter, Rebecca, three years later. I was again nervous until she started her baby milestones.

With Rebecca’s birth I knew she was our last due to the stress and worry of having another child with Joubert Syndrome, which causes mental and physical challenges. I had faith but was still nervous until I knew our two boys did not have Joubert Syndrome. Suzie is now almost 36 and Nancy is 31. They will always live at home with us to take care of them. We had wanted a larger family earlier in our marriage, but after having our fifth we knew we were done having children.

We now have five adult children and four grandchildren so far. Our youngest daughter Rebecca is attending BYU majoring in Genetics. Someday she may be helping families like ours with genetic disorders. 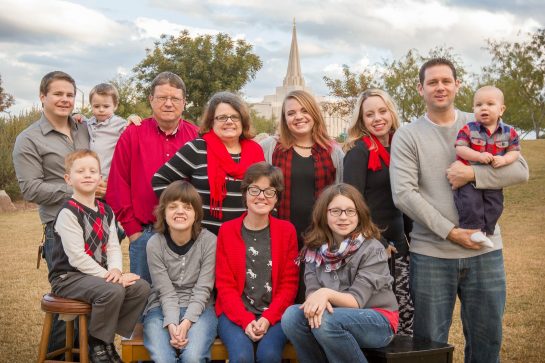 Debra Gale and her family