I never thought I was in a mixed-faith marriage because I believed my faith was the one and only true faith, and that my non-LDS husband was just a missionary work in progress. My insistence that my worldview is the only valid worldview is probably one of the primary reasons why I am in my third marriage.

My first husband was a convert who stopped believing after seven years and wanted out of our temple marriage to leave me alone with two toddlers. I thought he just needed time to get his head straight. That was 29 years ago, and he is still an atheist.

When my second husband fasted and prayed about his decision to join the Church and got the answer of no, I was taken aback. How could this be? If the Church is true—which I believe with all my heart—how could he get a no answer? That was about seven years before he said he wanted out of our 20-year marriage. I still wonder if he knew I was disappointed, and if he couldn’t live with a woman who thought he made the wrong decision about his faith journey.

In both of my first two marriages, I was very happy and surprised when my husband informed me he was not happy and wanted a divorce. I thought that the next time I would for sure pick a man of my faith, so I would not run into this problem again. Nevertheless, I again married a man not of my faith.

But my third marriage is different. He is a spiritual person. This helps a lot. He believes in prayer and following Christ. Although we had learned to follow Christ in a culturally different way, the big picture was still the same. He said that he had always wanted to marry a woman of faith and that he thought I made him a better person.

Since we have been married, he has attended Sunday meetings at my LDS ward with me every other week. (The other Sundays he spends with his adult daughter). He gets along with the ward members very well, and they all ask him when he is getting baptized. I ask too, but I am afraid sometimes that I will push him away. Missionary work is in my nature, and I can’t help but push. I know this, but I am not disappointed in him for not joining. He is a wonderful man who gives me the support I need to endure in this life.

Relationships are complicated whether you are the same faith or not. Once after a Primary program my sister asked me if the Primary songs about families being together forever was depressing. I told her, “Not at all. We came to earth for our mortal bodies that were capable of pain and sorrow, and sometimes that pain and sorrow comes from our families.” I always learn more through failure than success. Hopefully, by the end of this life I will be good at relationships. Moroni’s words inspire me in my quest:  “But charity is the pure love of Christ, and it endureth forever; and whoso is found possessed of it at the last day, it shall be well with him“ (Moroni 7:47). Connecting with people through charity, the pure love of Christ, is what is most important. 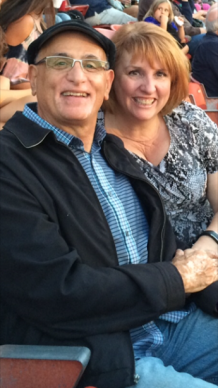 Kim Powers and her husband