Not a Last Resort

This story is part of our Mixed-Faith Marriage series, exploring the journeys and insights of active Latter-day Saint women married to men who are not members of the Church or who have left the Church. It was first published at By Common Consent, and is shared with permission here. Each story is a generous and vulnerable offering. We ask that comments be sensitive and nonjudgmental toward any woman’s choices or beliefs.

Interfaith marriages are often underrepresented in LDS discourse on dating, marriage, and eternal life. Although I’ve often heard marriages like mine described as “backup” options, for me it has been a joy formed through much prayer, study, and lived experience.

I see the essential barrier to interfaith dating and marriage is a reticence in the Mormon faith to actively befriend and genuinely associate with people not in our religion. We call them “non-Mormon,” but that term is so strange and so alienating; both my husband and I deeply dislike it. “Non-Mormons” are not non-persons, or non-entities—they are good, faithful, and beloved children of God. I think this labeling is born out of fear of “the world,” and continued emphasis on Mormons as a “peculiar people.” While I can see some of the historic roots of this mindset, to me it is bizarre.

I believe strongly, and have felt inspired multiple times in holy settings, that God does not define us as Mormon v. non-Mormon. If you look at the vast numbers of people who have walked this earth, and walk it today, not only is this distinction demographically nonsensical, but also deeply limiting to God’s capacity to love and bless and acknowledge his creation. I believe that our Heavenly Parents want all their children to return to them. That method of return will be vast and varied. It simply has to be, if you consider the dimensions of history and global populations and diversity of cultures.

If we widen out our concept of who we are as beloved sons and daughters of God, we can expand our own capacity to understand and love each other, across otherwise narrow religious and geographic and cultural boundaries. Boundaries that are ultimately rooted in prejudicial limitations of imagination and empathy in the natural man.

Growing up, my father often counseled us to have an “eternal perspective.” For me, this means seeking out higher truths. If we are actually invested in creating Zion on earth, why would Mormons, as a people, be so exclusive?

When I first met my husband at graduate school in England, I recognized immediately that he was a deeply good, kind, and thoughtful person. He was raised by a faithful Catholic family in Germany, and was committed to Christlike charity. We dated for four years before we were married—largely because of lengthy periods of international long distance, but also because we were conscious that coming from two different faith traditions we would need to seriously consider what we wanted our family to look like, including how our children would be raised. We didn’t want to enter into a marriage with these questions unanswered, and then feel resentful and sad later on.

We decided we would always attend church as a family, and that we would attend both Catholic mass and Mormon services. We decided that the core similarities in our faith—a belief in God, a belief in the Atonement, the central message of Christ to love one another and center our lives around service—would be the paramount lessons we would teach in our home. We agreed that while our children would likely hear messages at church services from church leaders that disparaged our family arrangement, or were contrary to the teachings of the “other” church, we would reinforce the central messages to our children back at home, and ask them to pray, search scriptures, and seek truth for themselves.

We’ve stuck to this, six years into the marriage and two kids later. We have both had wonderful and enriching experiences in Catholic and LDS congregations. We feel closer in matters of faith than we did when we first met—in many ways we’ve grown to be more similar in matters of religion.

I realize I’m lucky, and there are certain circumstances that make my situation easy: my husband was raised with similar Christian tenets, is happy having his kids raised religiously, is happy to be involved in an LDS ward. I also have lived in places where we’ve been welcomed without question, especially our current home in Washington DC. Our families have been wonderful and accepting, and we’ve never felt any sincere pressure from anyone close to us to convert, either way.

I also realize there are challenges ahead: our kids are still very young, and we haven’t had to deal with tough questions or conversations with them yet. Our faith may warp and change. But at the same time, aren’t these issues in every marriage? I have many friends who were married in the temple, but now one member has left Mormonism, or changed beliefs, or their children have struggled with faith. A mutual testimony of Mormonism at marriage isn’t a guarantee for a lifetime of stability and easy family life. We’re all in this for the long haul, and life is complicated. I believe compatibility, mutual respect, and genuine kindness are the most important things to look for in a marriage partner.

I wish that we encouraged Mormons to befriend and date outside the faith more often, starting in their youth. I met my husband when I was 22. I have never thought of him as a “last resort.” He is a person, a beloved son of God, capable of all the goodness and understanding Mormons too often ascribe only to people of our same faith. 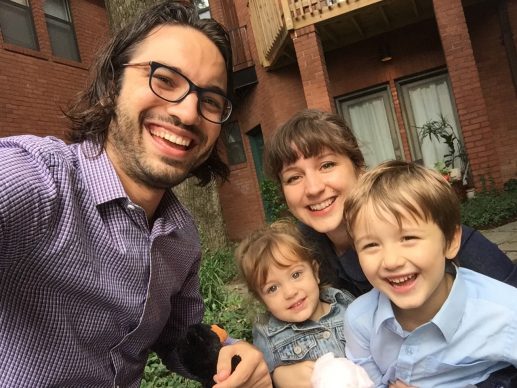