I was the girl who dreamed of getting married at 18 in the temple and having six kids. I did not imagine I’d ever be still single and old enough to serve a mission. Lucky for me, the Lord had different plans for me—I think the Lord knew that I needed a little more preparation for what he had in store for me and my life. I ended up serving a mission in Salt Lake City, and spent the entire time on the east side, serving in suburban areas much like the one I grew up in. It was here that I experienced people being “loved into the Church” over periods of years and decades. It was also here that I witnessed and was saddened by the bitterness toward the Church from neighbors and friends who were snubbed because they had politely declined invitations to church. These experiences on my mission were vital in my preparation for what lie ahead many years later.

I didn’t meet my husband until I was 29 and we didn’t marry until I was 33. In the years leading up to meeting him, I had prayed fervently for a husband and received many blessings from priesthood leaders. Every blessing I received always told me that “my husband was being prepared for me” and that I should be patient. Patience was not a virtue I possessed, so I began to pray for patience and of course the Lord delivered.

In 2007 I moved to the Seattle area to live with my brother after having my heart broken in Salt Lake City. I was a rock climber, and one of the first things I did upon moving was to find a climbing gym. I had no intention of falling in love with someone not of my faith, but that’s what happened when I met Bartek at the gym. We both recall the first time we saw each other—feeling the pull of two beings who recognize one another’s soul. We started off climbing together, and after our first kiss, I told him that I was Mormon and had certain boundaries and most certainly wouldn’t marry him. He was agnostic and against any organized religion and certainly couldn’t see himself with a religious person.

Needless to say, our courtship was long and rocky, but we always felt pulled back to one another and so we kept dating.

He is a careful decision-maker, so it took him four years to decide he could marry me. In that time, though I had fasted and prayed fervently and KNEW that I should marry him, I continually doubted my answers because of the pushback I got from family members and church leaders. I had a bishop who flat out told me that the Lord would never tell me to marry outside of the Church, and that if I married Bartek I would eventually go inactive. I had some tense and guarded conversations with family members who could not understand why I was “settling” and just thought I was being overly picky—passing up nice Mormon boys for a guy who climbs. These were all people I love and respect, so I felt torn between what I knew the Lord had revealed to me through sincere prayer, and what others who truly did have my best interest at heart were counseling me to do. I realized that ultimately, I am the only one guaranteed to receive revelation for my life, and I needed to trust the Lord and the answer I was given.

When we did decide to marry, we laid out some ground rules. We agreed first and foremost that we would not try to change one another. I would not try to convert him, and he would not try to discourage me from worshipping. My one deal-breaker was that we raise our children in the gospel and let them decide their own path when they are old enough to make an informed decision. Everything else we would learn as we go.

Before I made the decision to marry Bartek, I made a commitment to myself that I would choose not to be offended by what other people say. This has been important, because people say some really thoughtless things! I’ve been asked more times than I can count if I married my husband because I was inactive at the time, or if I settled for him because I couldn’t find a Mormon guy. Once, I was even asked flat-out (not by my bishop or priesthood leader) if I hold a temple recommend. Because of this commitment, I have been able to laugh about these questions and approach these people with a little more compassion because they truly don’t understand and (most of the time) mean well.

We have been married now for seven years and have two children, a 5-year-old boy and a 3-year-old girl. Our path has not been easy by any stretch. Our son has special needs, and developmentally is about the age of a 2-year old. I attend church alone with my two toddlers, and if I’m honest, I dread sacrament meeting with everything in me. My kids are very cute, but difficult and busy, so I don’t usually get anything out of it because I am busy chasing them. My ward is wonderful and understanding, and I do have some dear friends who will often offer to take one of my children to sit with them so I can manage only one child at a time. They don’t mind that my son screeches and wanders during the meeting, and there are several families who will kindly offer their toys to keep them occupied.

I am ashamed to admit that in weak moments, I find myself coveting the lives of women with husbands who diligently help with children during sacrament meeting and hold family home evenings. At these low times, I wonder how my life would have been different had I married the Mormon boy who did want to marry me, but whom I didn’t feel right about marrying at the time. While my husband and I are best friends, and share a lot of similar values, interests, and opinions, I am saddened to think that I can’t share some of my most cherished feelings with him.  I had decided early on in our courtship that I would never hide my religion from him so if I have a spiritual experience, I will share it with him knowing that it generally falls on deaf ears. He listens and nods politely, but I know he’s not really interested.

I won’t lie. Life is hard. Would I recommend marrying outside of your faith? No. Not unless you have prayed about it and the Lord tells you to do so. Would I do things differently if I could rewind? Maybe, I don’t know. Do I regret my decision? Absolutely not. This has changed me for the better. This has changed my family for the better. In my patriarchal blessing, I have been told that it is through MY testimony that my children will be taught the gospel in my home. This is what grounds me; I know that I followed what the Lord wants me to do. I know that my husband is a good man and has a pure heart. I know that as long as I personally am always worthy of a temple marriage, that my children and I will never miss out on the blessings of an eternal family, regardless of the path my husband decides to take. More importantly, I firmly believe that Bartek and I were meant to be. Even as I write these words, the spirit confirms this to my heart. Because of our differences, we push one another and challenge one another to be our best selves. The greatest blessing of being married to a non-believer is that he doesn’t allow me to live my religion casually. He makes me a better believer because he asks “why?” and forces me every day to evaluate WHY I believe. That is a precious gift. 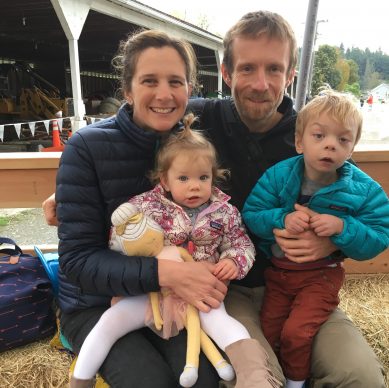 Cydney and her family.