Perhaps my patriarchal blessing was subtly preparing me for this life; at age 14, I was told that I would be the spiritual leader of my home. As this was given 30 years ago, that was a surprise. It was just assumed that the father in the family would be the leader.

I graduated from BYU. Twice. I had people ask to marry me. The answer was always no.  (Some of those no’s were heartbreaking.) But when I prayed to marry my not-of-our-faith husband, the answer was the most profound I’ve ever received. I think of that as an act of mercy. If I had no doubt I was to marry him, then I could have the stamina and strength to stay. My core was clear.

However, knowing you should be somewhere and having that be easy are not the same thing.

Don’t get me wrong; my husband is a fabulous man. There is a reason I was praying whether I should marry him. But, the challenges we face in our marriage have been significant.

My ward was incredible when I told them. I had been the YW President and then a Sunday School teacher and when I explained I had prayed and this is what I should do—they laughed at me. They simply exclaimed, “We know you, McArthur!” And that is the gift a family and ward can give—if they know who I am, they know me marrying a person not in our faith is NOT a reflection of my lack of testimony.

God knows. I know. (And, thankfully, my ward knew.)

Later, in a less-known place, I had one woman tell me it was nice I found my husband but she could “never settle” for someone outside the Church. I let the conversation go for a moment and then thought, “No, this does not get to stand.” So I told her calmly that following God was NEVER settling—no matter what path it took you to.

But that is a hard pill to swallow when I go places I am not known. When I speak up in Sunday school I am already less legitimate because I married outside of the Church. When people teach about temple marriages, they skim by me (and all the others who are not sealed). Frankly, I now judge a ward on how welcoming they are to a single-woman-with-child-in-tow. Often wards are great. Sometimes not.

Our faith is a faith of families. We believe in the eternal structure of families. Often it feels like we worship only as families. But those families and that definition can be very different. Once I asked my husband if he would come with me and bring all of our kids to church. I was excited for the literally one Sunday morning we would all be in the city where we usually have to fly to go to church. He agreed. But when the morning came he told me, “It’s just not my thing.” My response, “but I am your thing” did not change his mind. It hurt. Deeply. But I was also grateful for all the years when I was single. I know how to do church as a single person. You go; you serve; you worship and partake.  (And sometimes he does come. But then I am hyper-alert for crazy talk— and that’s exhausting.)

My husband started out not respecting organized religion. Understatement. Here in India, there is sectarian violence. Religion has literally divided and killed people. We were put on curfew a few years ago as religious differences simmered. When a guru told my husband that I was actually more spiritual than he was, he was indignant. “What?!?! I meditate every day— she only goes to church!” He understandably saw religion as a negative thing. But, he saw spirituality as vital.

I should be clear on that. He is a devout spiritual seeker. He reads holy books, he meditates, he serves. He actively cultivates a connection to divinity. There have been times when I am snotty and he gets the revelation our family needs. There have been times when I have asked God to push my husband on something—and my husband is able to receive those messages. (Not from me; direct from God is much better.)

We agree on almost nothing except the need to be connected to the divine. (We don’t even agree on what divine is.) Is that enough? Maybe. Some days that aches. Other days it’s on par with him being a morning person and me being a night owl.

Over the years, my husband has developed respect for the traditions of my faith. We do family night (even when our children protest), family councils, Sunday school lessons, bless the food, and Christmas. Sometimes it’s tiring because many of these things don’t happen unless I push. But, that’s not about my husband—that’s about how much energy I have to do good. That’s up to me.

And just this week, my husband asked me to bless his new conference room at his business. Usually the local Hindu priest here does the offering for a new enterprise. It made me laugh… it is not a role a Mormon woman usually fills… but I called on heaven as I knew how to do. And felt respected that he would want me to bless the room.

Still, sometimes I wonder what it would be like to have a partner in these things.

But I have talked to some Mormon friends and they say it is not easy on their side either. One told me she doesn’t read the scriptures with her husband because they have such different styles that it is not edifying to mix them together. Many were married in the temple and then husbands took a different path.

I think that’s the thing—no one has it perfect or easy. I just have to learn how to live with mine. Actually, better than live. Again, back to my faith. If I believe loving Heavenly Parents put me on this path—then I have to believe it is GOOD and right and beautiful. If it does not feel that way, then I am the one lacking the heavenly vision.

So, I practice heavenly vision—I remember that I am KNOWN by my Heavenly Parents. They love me. They love my husband. They know what we need to develop as eternal beings. And that IS enough. 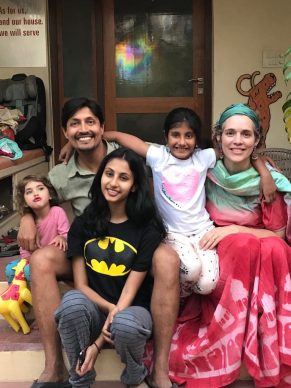 McArthur and her family.