As I reflect back on those impressionable years between the ages of 12-18, I fondly recall having very real desires and aspirations to heed the counsel of my young women leaders, when the time was right, to choose a man who could take me to the temple. And I did. My first marriage was in fact a temple marriage. But like many temples marriages, unfortunately mine ended in divorce. I was six months pregnant with our son when I separated from my then husband. Our son was eight months old when our divorce was finalized. At that point, to say life was in a state of disarray is an understatement. Being in my early thirties with an infant, divorced, a full time student, and living at home with my parents through it all, was a very tough road to navigate day to day. Those girlhood hopes and dreams of having an eternal family, now null and void because of choices that were not my own, brought to the forefront of my mind the very subject of companionship. Deep reflection forced me to assess what was really important to me in a partner, especially now that I had a tiny son to consider even more than myself. Sure, I had a temple marriage. But I had been married to a man whose priorities, desires, and chosen path were not in line with those of the Lord’s.

Fast forward a few years later. In terms of dating, a few things were not in my favor. The desire to date did not come right away. In fact it was a long time coming. Also, living in a small, rural town, I knew my choices to date a worthy member would be slim at best. I dabbled in online dating but never truly felt comfortable with it, and after several attempts it did not produce any results that I wanted. Moving to a bigger city was not an option either because I was bound by decree to remain within so many miles of my ex-husband. So, yet again heeding counsel, this time by my stake president, to “be open,” I sought the Lord in prayer. I poured my heart out. I told him I knew it was time: I was ready emotionally and mentally, and I would be open to options that I had not considered before. Soon after that prayer, I met my wonderful husband through a mutual friend. Almost immediately our compatibility was very evident. He was raised is a very traditional home by devout Catholic parents who instilled a very similar belief system in him and his siblings. We jived on so many levels, it was a little astounding to me. All through our courtship, which only lasted six months, I kept asking Heavenly Father if this was right. Each time I asked I received a witness of comfort and of peace, reaffirming to me that he was to be my husband and that all would be well.

Navigating a marriage to a non-member has been really easy for me. I am blessed that he willingly attends church each Sunday with me and our children, and while we do discuss matters of faith and doctrinal subjects at times, there is a level of mutual understanding and respect that we allow one another. When he has a question, I happily answer. But in the beginning of our marriage I promised myself that in terms of the Church, this has to be a journey he initiates on his own. Am I there to support that discovery? Absolutely! But it must come from him, not from my pushing or prodding.

Then and now, my testimony of temple marriage has never wavered. I still want it even now. One of the biggest lessons through all of this has been coming to believe that I will have it, but it will come in a way and in a time frame that is different from what we know to be traditional. My mixed-faith marriage has been one of the best decisions I’ve ever made, not because our faiths are different, but because we are two flawed, yet compatible people who at the end of the day are both seeking the same things in life: to love, to be loved, to raise God-fearing children who are moral, honest, and kind. I have peace in my heart knowing that one day he will accept the teachings of the gospel and that temple marriage will come. 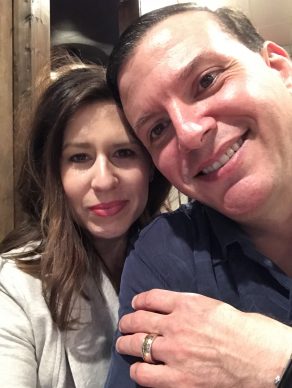 Tiffany and her husband