Strength: Spiritual Fitness and the Atonement

Several years ago, a friend and I signed up for a triathlon. Neither of us had ever completed one before. In fact, neither of us had ridden a bike much since we were kids or had swum in a lake more than just splashing around. Over the next six months, we swam, biked, and ran. We purchased wetsuits and tri shorts and put together training schedules. We practiced swimming in the lake where the triathlon would take place, as well as biking and running the tri routes. When race day finally came, we were ready. While I didn’t finish at the front of the pack, I had a positive experience and felt good as I crossed the finish line. A lot had changed in those six months. When we first signed up, I didn’t have the skills or strength to complete the triathlon. Nothing about the triathlon had changed, of course. But I had changed; I had gotten stronger. 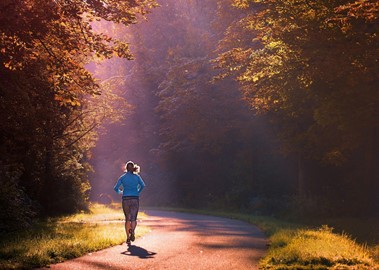 It’s easy to make comparisons between becoming physically fit and becoming “spiritually fit.” And probably all of us have heard some version of this comparison in a church talk at some point. Even as I trained for the triathlon, I found myself making the comparison often in mind. Just like physical fitness, spiritual fitness requires training. We build our physical strength to prepare for a triathlon course with swimming, biking, and running workouts. We build our spiritual strength to prepare for our life course through activities like scripture study, church attendance, and thoughtful prayer.

Just as we don’t sign up for a triathlon expecting to change the bike route, it’s not productive to approach life expecting to shape parts of the course generally not within our control: other people’s choices and actions, most illnesses and “acts of nature”—those unexpected events that seem to come out of nowhere, among other things. Instead, we should focus on building our own strength, changing the experience we have completing the course.

While this analogy provides some important insight, it also has some serious limitations.

The problem is, of course, that people opt in to the challenge of a triathlon. They choose when they will compete and they choose the type or length of the triathlon. When they sign up, they know exactly what they need to train for: the distances are posted on the website with maps of the courses. And no matter how hard the race is, it ends after the designated swim, bike, and running courses are completed.

Unfortunately, life doesn’t work this way. While we do have some limited control over what course we are on (through decisions we made in the past), we can’t always select between the course with the downhill run at the end or the one known for monstrous bike hills. In fact, sometimes we think we signed up for the sprint triathlon (generally .5-mile swim, 12.4-mile bike, and 3.1-mile run) and instead find ourselves struggling through an Ironman (2.4-mile swim, 112-mile bike, and 26.2-mile run). And the end of any particular challenge or course in life is not well defined. In other words, we generally don’t know what we’re getting into, can’t tell how much we have left to go and are unable to pull out even if we want to. What all this means is that sometimes our spiritual fitness will just not be enough.

We might find that our spiritual fitness is not up to the course because we didn’t train hard enough—we didn’t put in the work to build our spiritual muscles ahead of time. But there are plenty of other reasons we could find ourselves in this situation. It could be that we prepared valiantly for one course but suddenly find ourselves on a course much different than we expected. This could happen when we envision our family looking a certain way and it ends up looking very differently (perhaps due to divorce, infertility, or chronic illness for example). Or it could be when we face unexpected employment changes.

Also, no matter how much an athlete has trained, no athlete can swim, bike, or run forever. Our bodies simply have limits. No matter how much we spiritually prepare, we are not and cannot be infinitely spiritually fit. We have emotional and mental limits. If we find ourselves on a particularly long and difficult course, left to rely only on our own strength, we will eventually become exhausted and collapse.

Fortunately though, we are not left to our own strength. We also have another source of strength. We can draw on the enabling power of the Atonement or God’s grace.

Before I go further, I have to say that grace has always been a concept that I’ve struggled to wrap my mind around. For me, sometimes grace has an almost mystical feeling to it—or at least an ambiguous feeling. I have also struggled not to see grace as passive. This particularly happens when I hear grace discussed in terms of letting go, of turning things over to God in order to draw on his strength. To be honest, when I think of it like this, it feels a little like resigning yourself to your fate or just bracing yourself until the storm passes. Cast in these terms, calling on something that I only vaguely understood to get through a gritty, concrete problem or life circumstance has always felt like a last-ditch act of desperation.

Recently reading the story of Mary Whitmer gave me another perspective. Perhaps by now, many are familiar with her story. Mary Whitmer was a significant figure in early church history, the mother of five of the eleven witnesses of the Book of Mormon and mother-in-law of two more. David Whitmer, Mary’s son, first heard about Joseph Smith and the golden plates in 1828. Oliver Cowdery and Joseph asked David if they could stay at the Whitmer home to escape the harassment they had been experiencing. The Whitmers, who still had four children of their own living at home, agreed to let Joseph, Emma and Oliver stay at their farm. Joseph and Oliver began using the cabin loft for translation and the Whitmers also shared meals and materials with them. Joseph’s presence at the farm meant a steady stream of additional people were always coming and going. In short, the workload on Mary to care for her family and home increased dramatically with their arrival.

After some time, Mary began to grow weary. One day, while she was heading out to milk the cows, an older man she had never seen before approached her. “You have been very faithful and diligent in your labors, but you are tired because of the increase of your toil,” he said. “It is proper therefore that you should receive a witness that your faith may be strengthened.” He then showed her the golden plates. (Read the story here.)

In many ways, having an angel show her the plates changed nothing for Mary. She still had cows to milk, laundry to do, and extra people to feed. Her work did not decrease. Nothing in her circumstances was altered after that experience. But seeing the plates also changed everything. It gave Mary the resolve, the patience, and the courage to do what needed to be done. In other words, it changed her. And of course, that was the point. God hadn’t intended to make life easier by showing Mary the plates. His intent was to help Mary become stronger.

Perhaps it’s the very tangible events of this story that make the enabling power of the Atonement more understandable to me. The story makes clear both that something happens outside Mary (someone shows her the plates) and that this results in something happening within Mary (she feels fortified and able to carry on). In this light, grace feels empowering since it is literally drawing on God’s power to work within us. Grace isn’t about resigning ourselves to our circumstances. Instead, grace can give us the strength to exercise control of our experiences. This could be performing some act of courage to change a situation or extricate ourselves from it, or it could be by using the Atonement to change ourselves instead of waiting for something around us to change or railing futilely against things we don’t have any control over. Grace always requires action or growth of some sort.

Of course, spiritual fitness and God’s grace aren’t really separate from one another. They are both spiritual strength, both God’s power working within us. Our spiritual fitness could be thought of as strength we’ve already accumulated gradually over time—muscles we’ve gained through God’s help. Grace brings us an influx of additional strength—by further building the strength we already have, extending it beyond what we could do on our own.

Grace is what gets us through when we have nothing left to go on. On our own, we will eventually face limits—a hill too steep to bike up or a course too long to run. But God’s grace does not have limits. It can get up any hill and complete a course of any length. So with his grace then, we can get up the hill and finish that race also.

But it’s a mistake to see grace as the rescue mission, the call you make when you’ve used up your own strength and have no other options. Grace can and should be something we apply all along as a companion to our own efforts, something available to us at the beginning, middle, and end, when the water is smooth or choppy. It can be a steadying force, a source of comfort and assurance along our path if we remember to draw on it as we go instead of waiting until our moment of crisis.

Building spiritual strength, like building any other strength, is a process. It’s a process that requires effort and dedication. But we have never been expected to become strong enough on our own to complete the course before us. Fortunately, we have the enabling power of the Atonement available to provide us with additional strength. And with it, we can be strong enough to complete any course ahead of us.

Leslie Albrecht Huber lives in Middleton, Wisconsin with her husband and two of her four kids (the other two insisted on growing up). She spends her time working as the Communications Director for a local nonprofit, driving children around, and planning trips to exotic places – even if she doesn’t always get to go on them. Leslie loves the opportunity to write for the LDS Women Project and be part of sharing women’s faithful stories and perspectives.