I think the word foremother can be a noun or a verb. A noun, as in a mother who is situated before others, and a verb–to be a foremother, to care and nurture for those in front of you. So often we talk of foremothers–mother Eve being the praiseworthy epitome of such. But how often do we think about the ways in which we are foremothers? What are we doing to forge the path for future generations?

A few weeks ago I read an article about an extremely inspiring woman in church history. I was baffled that I had not heard much of Martha Maria Hughes Cannon– a woman’s suffragist, physician, lecturer, wife, mother, and senator. Cannon graduated from medical school at the University of Michigan in 1881, after which she graduated as the only woman in her class from the University of Pennsylvania Auxiliary School of Medicine as the ONLY woman in her class. She then moved back to her home state of Utah, married republican candidate Angus M. Cannon, entered the race as a democratic senate candidate and defeated her husband. Cannon was the first female senator in the United States of America. Aside from serving two terms in the legislature, Canon raised six children, advocated for women’s suffrage, and served in the medical community until the day she died. 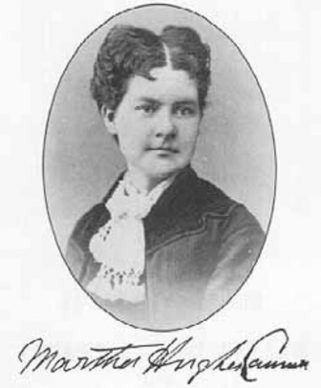 Martha Maria Hughes Cannon’s story left me speechless. I called a friend and asked her if she had heard of this woman before. She hadn’t but was also baffled and amazed by this woman’s courage and legacy. Cannon pushed boundaries in her day. She stood alone much of the time–whether as the only democrat in her family, the only female in her class, or the only woman senator in the country. Cannon’s example and courage made a significant impact on women around her, and it still does today.

I am a student at a CES school, and yesterday I attended the very first annual LGBTQ+ Pride Celebration organized by students from my school. We marched just south of campus. The next day, I woke up to see my picture on the front of a local newspaper–yelling and holding my sign. I felt proud to be representing the LGBTQ+ community, but I was nervous to have the picture so public because I didn’t want some of my friends and family who do not support that cause to say unkind things about me. Then, I remembered Martha Maria Hughes Cannon, and how she, too, pushed boundaries. I am sure that Martha Maria Hughes Cannon had people judge her and speak unkindly about her. But in the long run, we remember her for setting the stage for so many women in medicine and politics.

Martha Maria Hughes Cannon was a foremother. But we all have an opportunity to be a foremother. Whether it is to actual children, younger siblings, or future generations, our actions now have the power to affect millions of others. I know that God gives us the strength to be a foremother, to push boundaries, to stand out and speak out, even when it is uncomfortable.