Kay Moore was an eccentric member of my ward who I respected and loved but did not initially understand. Two years ago, in 2019, I felt a strong impression that I should take time to really listen to her. Kay and I arranged to meet weekly for a few hours, often at a local café, during which she would share her wisdom and her life stories. I wrote these things in a book that Kay titled, Observations of an Ordinary Woman. Here I record a shortened version of her influence on me and others.

My appreciation for Kay grew as I understood her life stories, which she had kept largely to herself for 50 years. She had much to say about her philosophies, but sometimes lacked words to describe her tragic losses. She had been brutally assaulted at age 19 when she and a friend hitchhiked home from finishing school. At age 21, she was raped by her supervisor in the Navy and then subsequently gave birth to a child she gave to a family she chose at an adoption agency. Her father shunned her without finding out the facts. And, most painfully, at age 24, she lost her soulmate to suicide three weeks before their wedding date, after a drug overdose affected his brilliant mind. 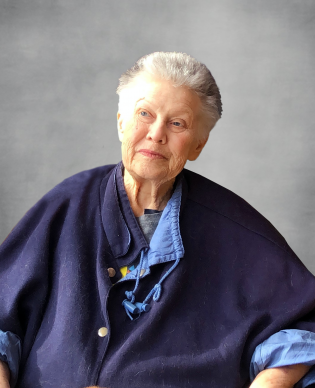 Reeling from these losses, Kay began to help marginalized people. She began by welcoming teenagers into her home who needed shelter and encouragement. When Kay told them, “You are loved, wanted, and important,” she felt like God was telling this to her, too. Later, she housed international students and more young people finding their way in life. Then, in the latter part of her life, she cared for developmentally disabled adult men in her home.

In 2001, the missionaries knocked on Kay’s door, being a welcoming person, she let them in. The Gospel they preached felt good, and this surprised her. Her soulmate, Dennis Despain, had grown up as a member of the Church of Jesus Christ of Latter-day Saints but was not active when Kay met him, in part, because of how his homosexual friend was treated at Church. She first met a bishop of the Church when he arrived at her door to tell her Dennis was dead. She first entered a Church building when attending his funeral. And, Kay initially believed that the religious expectations Dennis had grown up with had added to his despair.
Her first impression of the Church was wrapped up in these painful memories, but as she investigated, she felt the love of God more strongly with this people than any other of the many religions she had sampled. So, in April 2001, she was baptized and received the Gift of the Holy Ghost. Kay told me that joining the Church was the best decision she ever made. She explained that during the years she had sat in Church, wisdom distilled upon her in that atmosphere of love. She finally had words to describe the beautiful things that life had taught her.
Kay was diagnosed with advanced inoperable cancer in December 2020 and passed away in April 2021. During her final months of life, she taught me and many of her volunteer caretakers beautiful truths, some of which I list here:

Kay was a mother in every sense of the word – biological mother, adoptive mother, foster mother, and nurturer of the marginalized. I believe that it was her unconditional love of the people around her that opened her mind to big truths. And thus, she was also a spiritual “foremother” because her wisdom helped me and others see the love inherent in the Gospel and its invitation allow our Heavenly Family (Father, Mother, and brother Jesus Christ) to love us. Her influence lives on in the lives of the many people she helped and taught.