Tips for Studying the Old Testament as a Feminist

As a young adult, I began to identify as a feminist while remaining an active member of the church. I clung to and cherished the gospel truths I had been taught as a young child, while also choosing to ask questions and consider different perspectives through a feminist lens. I felt strongly that the restored gospel of Jesus Christ in its purity was inclusive and championed women. I learned that women had just as much access to priesthood power as men and that women can be powerful teachers, leaders, ministering sisters, and missionaries with many opportunities to preach, uplift, and bring others to the Savior. I learned more about the cherished doctrine of Heavenly Mother, and while much hasn’t been revealed about her, there are echoes and symbols of her divine power in the gospel. I gained a stronger testimony of the love my Heavenly Parents and Savior had for me. Even with the aspects of church culture, history, and scripture that I don’t completely agree with, I have been able to feel the Lord teach me and help me to truly understand how much He values His daughters.

On the surface, the Bible seems very patriarchal with hints of misogyny. While definitely inspired by God, it was written by men who saw the world and their relationships with God through a masculine lens. Women spoken of in the Bible are often unnamed or only given a few verses to describe their accomplishments. Some are even unfairly villainized. The Bible has been used to excuse the oppression and abuse of women. It has been used to trample over the names of valiant women or refer to them as temptresses and liars like Eve and Sarah. It has been used to enforce Christianity as a male-dominated religion and to teach that women must be subservient. So how on earth can a feminist not only study the Bible but love it? Here are some tips for reading the Bible with a positive focus on women. 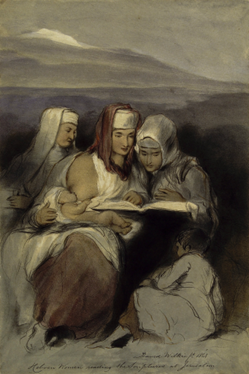 1. Appreciate the Bible for what it is
As stated in the eighth Article of Faith, as members of the restored church we “believe the Bible to be the Word of God as far as it is translated correctly.” Just like the Book of Mormon and Doctrine and Covenants, the Bible was inspired by God and recorded by His prophets. However, during the Great Apostasy, many things were purposely changed or mistranslated. Without the Spirit and the priesthood, parts of the Bible were not accurately translated, unlike the Book of Mormon which was translated by the power of God. There were lots of inspired people who tried their best to help average people have access to the Bible, but they did not have the fullest of God’s power at their aid. The Bible was also corrupted by churches and governments so that it would fit within their agenda. Most of these groups wanted women silenced, so things were taken out or added to make men appear more dominant in the Bible. As Latter-day Saints, we have been commanded to study the scriptures, which includes the Bible. If we see the Bible for what it is, God’s words that have been tampered with and lean upon divine help and modern resources, we can feel uplifted and edified as we study the Bible.

2. Read between the lines
When reading about the women in the Old Testament, it is helpful to ask ourselves questions. Who was the woman behind the few vague sentences attributed to her? What else made up her identity other than her relationships to men? If the Bible portrays her in a negative light, ask yourself why or how? Do your research into what life was like back then and why certain behaviors were deemed unseemly in women. What could have led her to make certain choices? Take the example of Noah’s nameless wife: We’re told that Noah’s wife boarded the ark with him, but we don’t know what emotions she must have felt. It must have been more than just her submission to her husband that led her on the ark, but a personal witness that this was the right thing to do, despite how much it may have hurt to know that her family and friends would be washed away in the flood. What a powerful conviction she must have had of God’s plan to be able to join her husband on the ark!

Was Lot’s wife really as worldly as the Bible depicts her when she turned back to face Sodom, or was she worrying about her friends and family left behind, wondering how she could help them? We can’t let the faith, spiritual strength, and courage of Miriam get buried beneath her speaking out against Moses and being punished by the Lord. Even the most faithful have times of weakness and doubt, just as men throughout the scriptures such as David, Soloman, and Lehi. When prophets are teaching multitudes, imagine the mothers trying to keep their squirmy children quiet with the cheerios and coloring books of the time, hungering for the word of God and hoping to get a taste in between the cries of their little ones.

It’s okay if you’re adding to the scripture account; often we don’t have much to work with but filling in the blanks can add to our understanding and appreciation of the faithful women in the Bible and help us to relate to them. It’s easy to say that there aren’t very many women in the scriptures, but when you look closely at each unnamed woman, you realize that there are actually many accounts of faithful women. Just because the men who wrote and translated the Bible didn’t see their importance doesn’t mean that God didn’t.

3. Pray for understanding
Whenever reading the scriptures, it is always important to do so prayerfully. When we first started to study the Old Testament at the beginning of the year, I was a little concerned. I worried that it would test my faith as I read through the entire Old Testament. Right before starting with Come Follow Me, I prayed and asked the Lord to help me to appreciate the Old Testament and to have an open heart and mind. I have seen many answers to that prayer as I have read stories differently than before, learned unique insights, and have been introduced to amazing female characters I wasn’t familiar with before. When I start my study with a prayer, I always feel more uplifted and edified and I feel like I notice the importance of the women in the Bible more. I pray to know the connection between womanhood and the atoning sacrifice of Jesus Christ. I pray for answers and comfort in regards to certain concerns about gender and the gospel. Through prayerful study, I let my Heavenly Parents teach me the doctrine of Their son and my identity as Their daughter with divine potential. Prayer is a powerful tool for helping us to understand and see ourselves and our potential through God’s eyes.

I hope that these three tips will enhance your study of the Bible and other sacred texts. There is so much that we can learn about from our biblical foremothers. These women teach important truths of our own access to priesthood power, revelation, and saving ordinances that we have as daughters of Heavenly Parents. Choosing to focus on the women in the scriptures and what they can teach us, can open our minds to how valued we really are by Them. As you apply these tips to your study of the Old Testament, I know that you will feel empowered in your own personal work as a modern disciple of Jesus Christ.