Not Missing the Point: Recognizing Sexism and Finding Meaning in the Old Testament

Although the conversation happened several years ago now, I still think of it often. While serving in a leadership role, I was meeting with another church leader. We had been discussing several women who had left the church or who stood on the very precipice of leaving. Although each woman had her own circumstances, a deep-seated concern with gender inequities at church was a central thread in their unconnected stories. 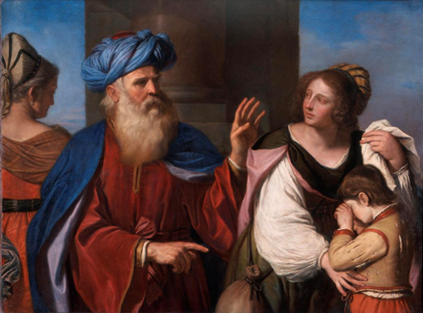 “Banishment of Hagar and Ishmael” Guercino 1657.

Conversations like this one were hard for me because I understood how these women felt and how these feelings could shake a person’s faith to the very core. They were also hard because as I talked with church leaders, I existed as two people: I was a church leader, with a strong and unmovable testimony, expressing my care and concern for other women and their heartbreaks. But at the same time, in a way I hardly admitted to myself and certainly didn’t want to admit to others, I was also one of these women: hurt and confused, standing not so far from the precipice I saw them teetering on.

The conversations were hard for this church leader because while he was deeply committed to the people under his stewardship, he didn’t really understand these women’s feelings. He listened hard as we talked about things he had never thought about before: about women never speaking last in sacrament meeting, the significant difference in resources (callings and budget) used for boys’ activities vs girls’ activities, women not being part of their own baby’s blessing and rarely being included in leadership training or General Conference talks. While he felt sympathy and concern for these women and even recognized that some of the issues they pointed out represented true injustices, he didn’t fully grasp how these injustices led to hurt, doubt, and finally exit from church.

On this night, as I was walking out of his office, exhausted from the heaviness of the topic and from my efforts of trying to stay fully within the church leader persona myself, he paused at the door. Then he said something that perhaps he thought summarized what we both felt. Although I don’t remember the words exactly, it went something like this: “Just because there are gender inequities at church doesn’t mean the Book of Mormon isn’t true.”

I nodded. Of course. The Book of Mormon is true. And no amount of talking about a woman’s role to serve as a helpmeet to her husband changed that.

But the conversation stayed with me, leaving a festering sense of dissatisfaction. Over the next few days and then over the next few years, I replayed that moment over and over in my head. Except in my replaying of it, I didn’t just nod and walk out. I responded. I said, “And just because the Book of Mormon is true doesn’t mean that there aren’t gender inequities at church that cause significant hurt and do damage to people’s testimonies.” It seemed to me that he had missed the point.

I have thought about this conversation more as I have read the Old Testament this year. The Old Testament, and in fact all of the ancient scriptures, are glaringly sexist. Although numbers differ depending on exactly who you are counting (Named women only? Specific women even if they are unnamed? Women in a group of an unknown size?), there is no getting around the fact that women are hugely underrepresented. For example, a recent study found 93 women in the Bible who did 1.1% of the talking.

The fact that the Old Testament is sexist should come as a surprise to no one. The stories of the Old Testament took place in sexist cultures. Scholars continue to debate exactly what role women had in Hebrew society and in fact do find evidence of areas where women had authority. And there are a few stories in the Old Testament depicting women in leadership roles. Still, women were seen as property throughout their lives, first of their fathers and then of their husbands. And examples of them exercising political power or leadership are few and far between.

In the last decade or so, there has been a considerable effort to, as I have always thought of it, compensate for this shortcoming. Heather Ferrell has researched and identified every woman in the Old Testament and other scriptures and done tremendous work to make their stories more accessible and more widely known. The Church has developed an institute class titled Women in the Scriptures. There have even been scholarly articles discussing the possibility that some of the texts in the Old Testament were actually written by women.

I’m thrilled to see more recognition of women’s voices and experiences. I believe that women need women heroes and that the efforts being made to rescue the stories of women from obscurity matter. Yet, there has always been part of me that is perhaps illogically frustrated by this celebration of obscure women, of the practice of drawing fundamental life lessons from women who often are barely more than a mention in a verse, lessons that require a huge amount of interpolation on our part.

It wasn’t until I reflected on the conversation with this church leader that I fully understood my frustration. Just as I felt in that conversation years ago that we shouldn’t let the truth of the Book of Mormon overshadow the fact of sexism at church, I also feel that we shouldn’t let the meaning we can find in women’s stories in the Old Testament overshadow the basic sexism found in the book.

Allowing one truth, no matter how important we believe it to be, to overshadow other truths causes several problems. It dismisses these truths and their importance. It shuts down conversations, not allowing a place for questions and searching. And perhaps most importantly, it leaves no path for change.

The first step toward creating change is to recognize and name the problem that needs to be addressed clearly, without apologies or disclaimers. A person with anxiety, for example, must first learn to recognize when they are feeling anxious. They should use the word anxiety, name the problem, identify it. Not until the problem is identified can they start to address it. The same is true for racism or sexism. We can’t change behavior we haven’t first identified. The purpose of recognizing a problem is not to shame or assign blame. The point is to create change.

When women come forward with concerns about sexism or gender inequities at church, the response cannot be that the Book of Mormon is true. Reminding them of the truth of the Book of Mormon doesn’t address their pain or allow the awareness to grow that is necessary for change.

Similarly, we can’t lose sight of sexism in the Old Testament just because there are now more resources and efforts to include women in its stories and lessons. If someone laments the lack of women in the scriptures, our answer can’t be to refer them to the list of women’s names from the Old Testament without also acknowledging that women only speak 1.1% of the time and yes, their voices are sorely lacking. We must continue to recognize and name the problem if we really want to create change. If we want to give women a broader and more important role in our stories of faith now, we can’t gloss over their severely lacking role in the past. Just because we can now find meaning in these barely mentioned women doesn’t mean that barely mentioning women is acceptable.

A few weeks ago as I sat in my Old Testament Sunday School class, I had a new thought, something I hadn’t considered before. In my mind, I went back to that office years ago. I hear this church leader say, “Just because there are gender inequities at church doesn’t mean the Book of Mormon isn’t true.” I think of my reversal of the words: “Just because the Book of Mormon is true doesn’t mean there aren’t gender inequities at church.” And I realize the flaw in my response. In both my interpretation of his original statement and in my reversal statement, there is a linking of the two parts of the sentence. I had not allowed both statements to exist within me as fully separate. If I had, I would not find one truth threatening to the other.

I had found it difficult to talk authentically about gender inequities at church because on some unconscious level I was afraid that if a church leader realized how strongly I believed that the church had many sexist practices, he would conclude I must also think the Book of Mormon wasn’t true. Or maybe it went beyond that. I had to employ a coping mechanism of avoiding and ignoring sexist practices I saw because I wasn’t entirely sure myself that it was possible to be both deeply bothered by sexist practices at Church and also be deeply committed to the truth of The Book of Mormon. And while I really, really wanted to see change in how women were valued and treated at church, I also really, really wanted to stay firmly planted in my belief of the truthfulness of the Book of Mormon.

Perhaps I was the one missing the point. Because perhaps the point really is this: we don’t have to choose between truths.

The Old Testament is sexist, generally glossing over women’s stories. The Old Testament has stories of faith from which I, as a woman, can gain spiritual insights. This isn’t possible because of or even in spite of the Old Testament being sexist. It is possible because of different characteristics of these stories, characteristics not related to the fact that the stories are sexist. Not only does one sentence not overshadow or compensate for the other, but the two sentences don’t even go together. I can acknowledge each as true and important without apology, without having to try to either minimize one or constantly interject the knowledge of the other.

When I read the scriptures, I can accept my truths: I find meaning in Old Testament. The Old Testament is sexist. And instead of reversing that statement from years ago, I can simply state the truths I see in it: The church has a lot of sexist practices and policies. The Book of Mormon is true.