A Humanitarian at Heart

Suzanne Harwood didn’t always want to be a nurse. In this article, she explains how she felt guided to nursing and how that decision has affected her life and the lives of countless others in Guatemala, India, TImor Leste, Mozambique and beyond.

“We both feel we were guided to each other.” Suzanne Harwood’s eyes light up. Her cheeks blush under her freckles. She and her fiancé, Chris Silva, have a lot in common. They went hiking on their first date. Their Facebook profiles are a canvas of the two of them: cheery photos running together, crossing finish lines, and wearing medals.

She chops onions and carrots and throws them on the stove to sauté. She wants to get the ingredients into the slow cooker before she spends the day wedding dress shopping with friends.

Harwood talks in low tones and speaks softly. She is perpetually calm. Her bright blue eyes lock on yours as she speaks. She makes people feel comfortable, but says she used to be shy. “Nursing helped me a ton because immediately you have to be intimate with somebody and help them feel comfortable.”

Over the past four years, Harwood has traveled to Central America, Africa, India, and Timor Leste, using her medical expertise as a nurse practitioner to bless the lives of others. She gushes about her favorite organization, Care for Life, in Mozambique. 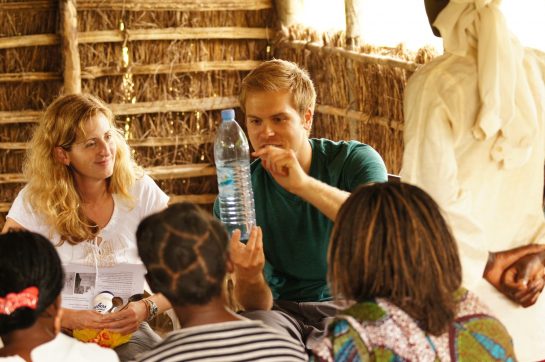 “That is the best organization that I’ve ever encountered. They kind of take the principles of the gospel, and the organization of how the Church is run and apply that to humanitarian work.” She went to Mozambique in May of last year.

“Care for Life goes to a village and talks to the village elders and asks them, ‘Hey do you want this? This is what we offer.’ A lot of times village elders will approach Care for Life. They’ve heard about what they’ve done for other villages. They use local people to teach other local people how to improve their lives. They use all local resources. It’s teaching a man how to fish; it’s a fabulous organization.”

Harwood explains one of the first things Care for Life teaches is how to build latrines. “A lot of times they get sick because they don’t use latrines. They teach villagers the importance of using latrines instead of going to the bathroom wherever.”
She continues, “If they build a latrine on their own using local products, Care for Life will supply cement so they can make the latrine permanent. It’s local cement that they could purchase. They try not to use anything villagers couldn’t get themselves if they had the means, or anything that is not locally produced. One man was taught how to make bricks from local mud for latrines. He built a latrine for himself, and then he realized he could build more bricks and sell them to other people. Now he employs two men building bricks. What a huge difference that can make. I can’t say enough about the program.”

Care for life teaches healthcare and finances and offers microfinance, education, and other life skills. The organization promotes safety for women and children. Harwood says, “Most all of the women have been raped by the time they are thirteen. There are a lot of misconceptions, especially with AIDS. There’s a misconception that if someone has AIDS, if they have sex with a virgin, they’ll get rid of the AIDS.” 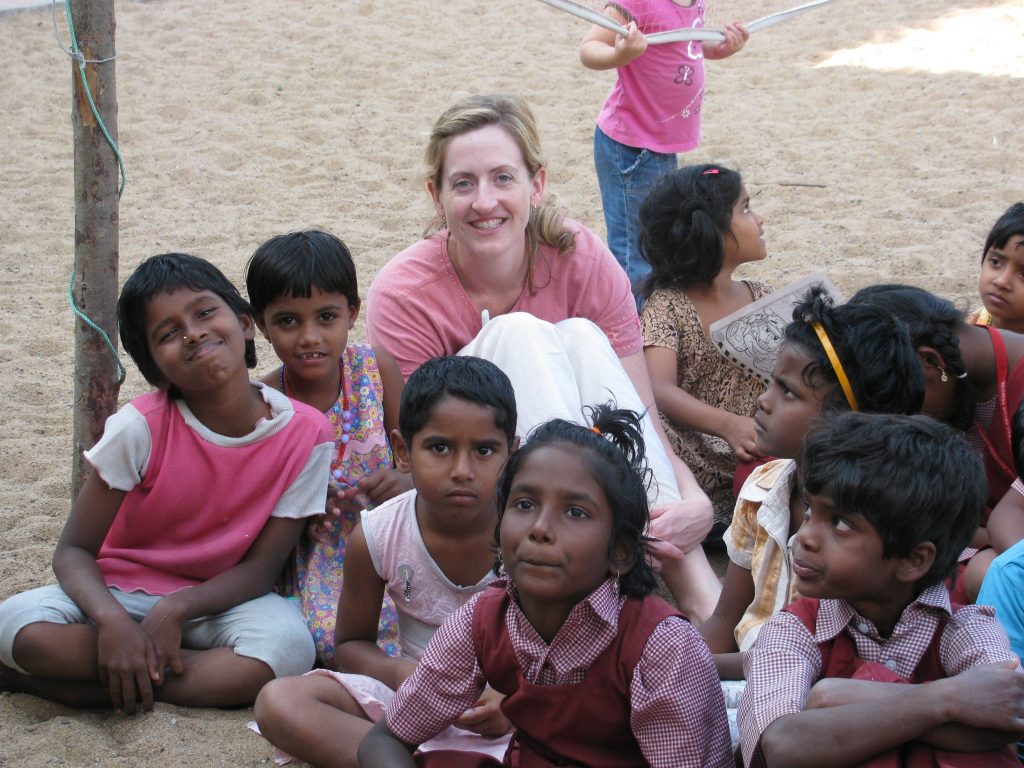 Harwood talks about her role in Care for Life: “When I was there, I talked about basic health care. The village will elect certain people to represent them–Health Promoters of the village–who are then responsible for about five families in the village. We teach the Health Promoters and then they go and teach those families they are responsible for. They check in on those families to make sure that they understand concepts and are applying them.”

She taught the village Health Promoters about tuberculosis, malaria, and nutrition. “A lot of the problem with nutrition is that they don’t realize that you have to eat a varied diet. They get a lot of starch, but nothing else, so their diet lacks a lot of vitamins and protein. They have access to protein, so we talk to them and explain they need protein.”

“It’s changed the whole life of the village. People are healthier and they’re more motivated to be kinder to their families. There is less abuse going on, and they are more successful and empowered,” she says.

Care for Life is Harwood’s favorite humanitarian organization she’s worked with, but going to Mozambique wasn’t her favorite trip. “My favorite trip was probably Guatemala. I kind have a kinship with Guatemala. That was the first place I ever went internationally. I did that as a student at BYU. I developed a love for the Guatemalan people.”

Harwood didn’t always want to be a nurse. She started BYU majoring in biotechnology. “It sounded cool,” she says. Still unsure about what to do, however, she took general education classes. “Then I just kind of felt like I should do nursing. I went and declared that as my major,” she says.

Her friends’ reactions surprised her. “Everybody I told said, ‘Oh yeah, that’s totally right for you!’” Harwood says although it felt right, she didn’t recognize it for the inspiration it was at the time.

“My mom was always a big influence. She never tells me what to do. I decided on nursing without talking to her. When I told her she said, ‘Oh that is so right for you, Suzanne.’ The confirmation of that decision was really encouraging.“ 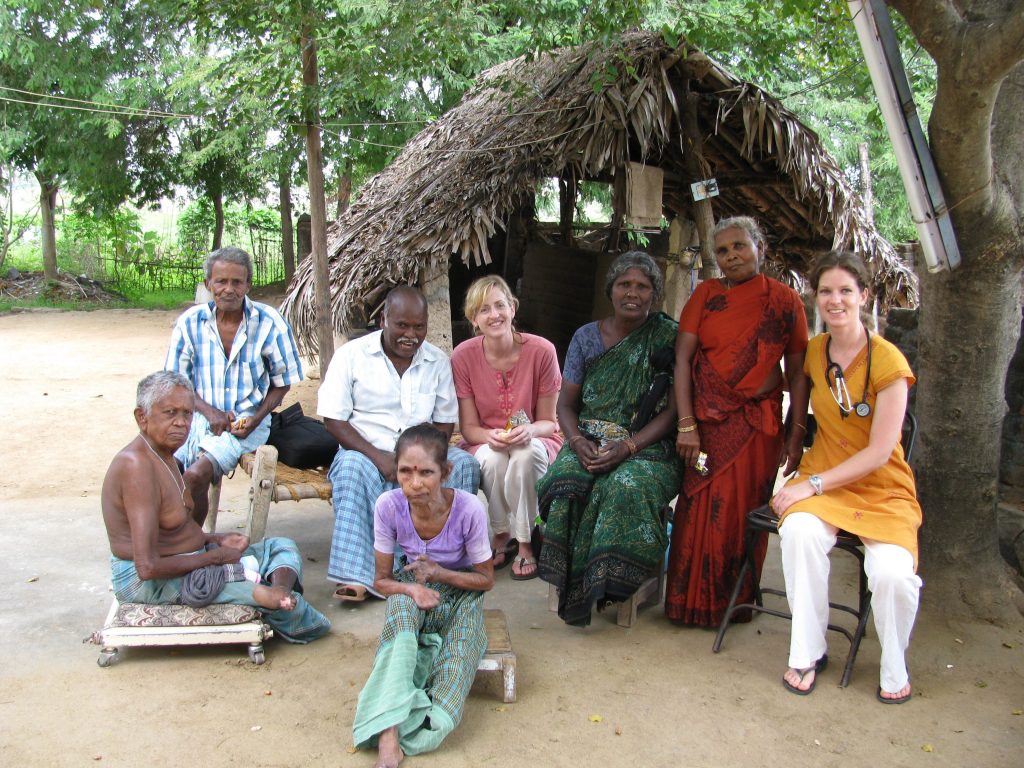 But there were obstacles to being a nursing student at BYU. She reflects that her grades could have been better, and says she’s a natural procrastinator.

“It made me a little bit more determined,” she says.

She credits a good letter of recommendation from a summer job to her acceptance into BYU’s nursing program. “I knew I was doing the right thing, but I didn’t know know, until my first day of clinicals. I was doing an OB round and I saw a vaginal birth and a C-section. I thought, ‘This is so for me!’ I was on fire when I came home that night.“

As graduation commenced, BYU offered the opportunity to go to Guatemala for a month as a nursing student.

“Study abroad sounded great, but it’s expensive. I didn’t have the money to do that kind of stuff. I was supporting myself. My mom had helped me out a little bit, but for the most part I was on my own. I don’t know, somehow I just kind of ended up doing it.” 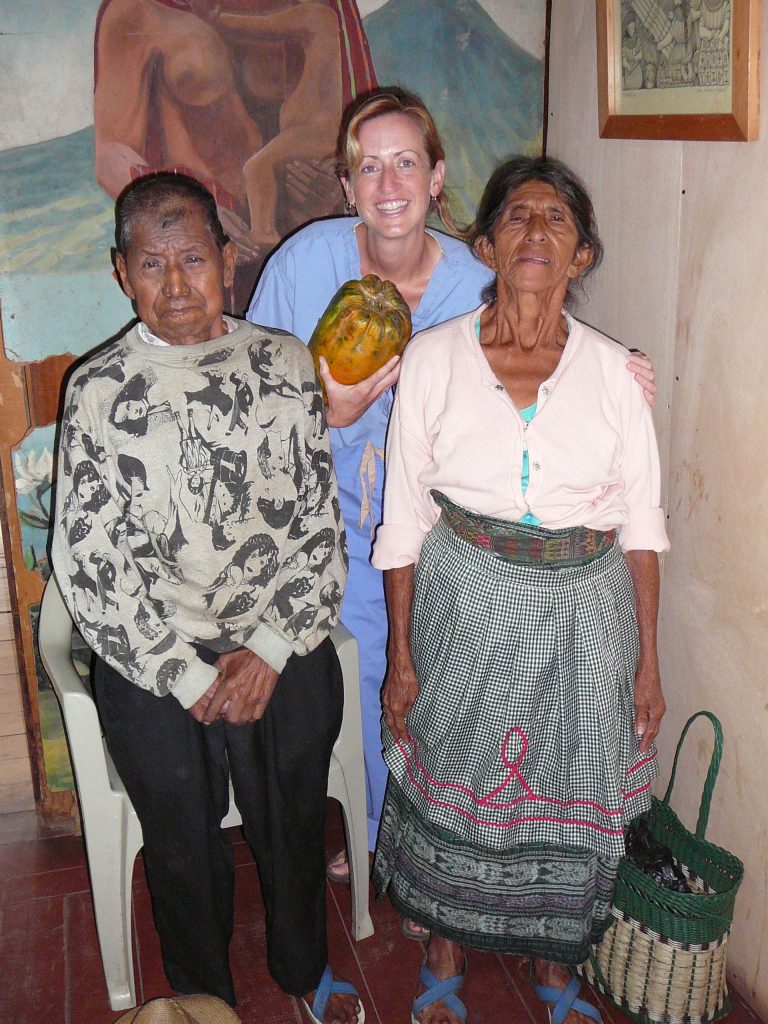 “I didn’t know the other people who were going, and because I was shy, it was a big step for me. Being in Guatemala really helped cement my high-school Spanish. It helped me feel comfortable in a third-world country. I had never had any experience like that before.”

Harwood says from the time she chose nursing, she always knew she wanted to be a nurse practitioner, but knew she needed experience first. She had worked for two years in Salt Lake City when she discussed graduate school with her mom.
“I said, ‘You know, I don’t think I’m going to apply for grad school this year. I don’t have enough experience. I’m not going to get in.’”

“My mom said, ‘I think you should apply anyway.’ It was kind of firm for her–usually she’s not like that. I thought, ‘Well, I guess I’d better apply then.’ So I did. And I got in.“ 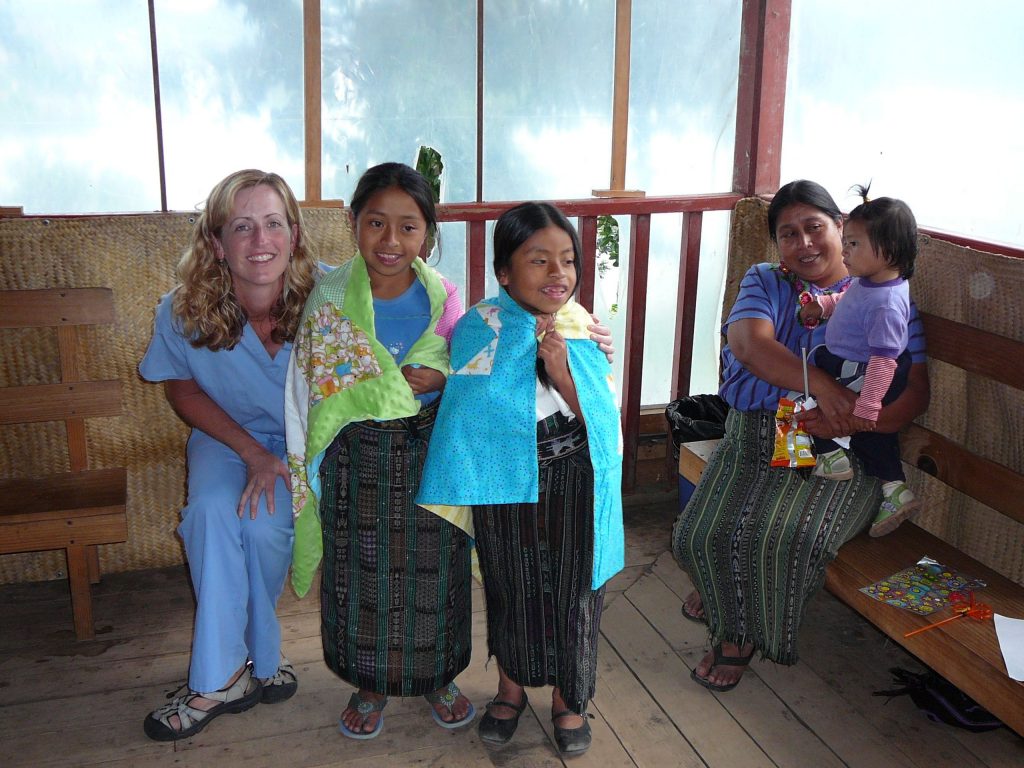 Harwood’s first job as a nurse practitioner was in West Valley, Utah, where many of her patients spoke Spanish. “I was in a position a couple of times where there was nobody else in the room besides me, and the patient didn’t speak any English. That really helped my Spanish over time. I was able to apply for the job I have now in Oakland. Part of my interview was, ‘OK, in Spanish explain to a patient why they need a colonoscopy and explain the procedure.’”

Harwood had taken Spanish in high school, and speaks with affection about her high-school Spanish teacher. “One of the great things my teacher in high school taught me was, ‘If you don’t know how to say something, you talk around it and explain it.’ That’s what limits a lot of people. That’s the key I’ve learned with languages.” 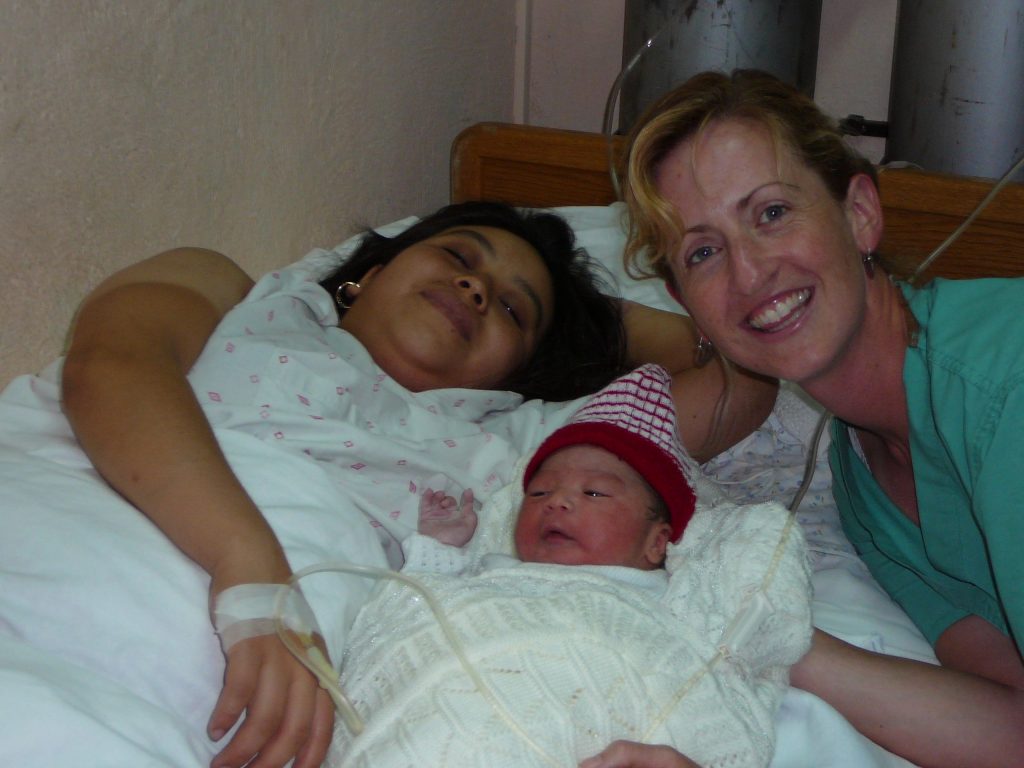 Suzanne with a baby she delivered in Guatemala

There was another opportunity to go Santiago, Guatemala, to work in a little tiny clinic in 2008. “I thought, ‘Well, I know Guatemala.’ That was a good experience,” she says.

In February 2010 Harwood traveled with Rising Star Outreach to Chennai, India, where she worked with people affected by leprosy. She also worked with children.

In August of that same year, she traveled with LDS Charities to the island of Timor Leste. Her experience there was difficult.

“The saddest thing I saw was this little baby, I think about nine months old. He was probably the size of a three-month-old. Severe heart defect was all I could pick out, and that the baby was going to die. There was no way that baby was going to make it to two years old. And we didn’t really have the capabilities on the ship to do that kind of surgery on a child. And we were only there on a temporary basis. Usually with stuff like that you need follow up.”

Harwood didn’t feel like she or the other providers were able to do much for the people of Timor Leste. “There definitely were some lives that changed because we did have surgeons on the boat. We’d send people back for surgery–kids with cleft palates and stuff like that. But it was frustrating to me, too, the people we couldn’t help. We saw some people with things you would never see in the United States, people who were severely deformed, a lot of times, with something that if caught earlier on would have been taken care of. 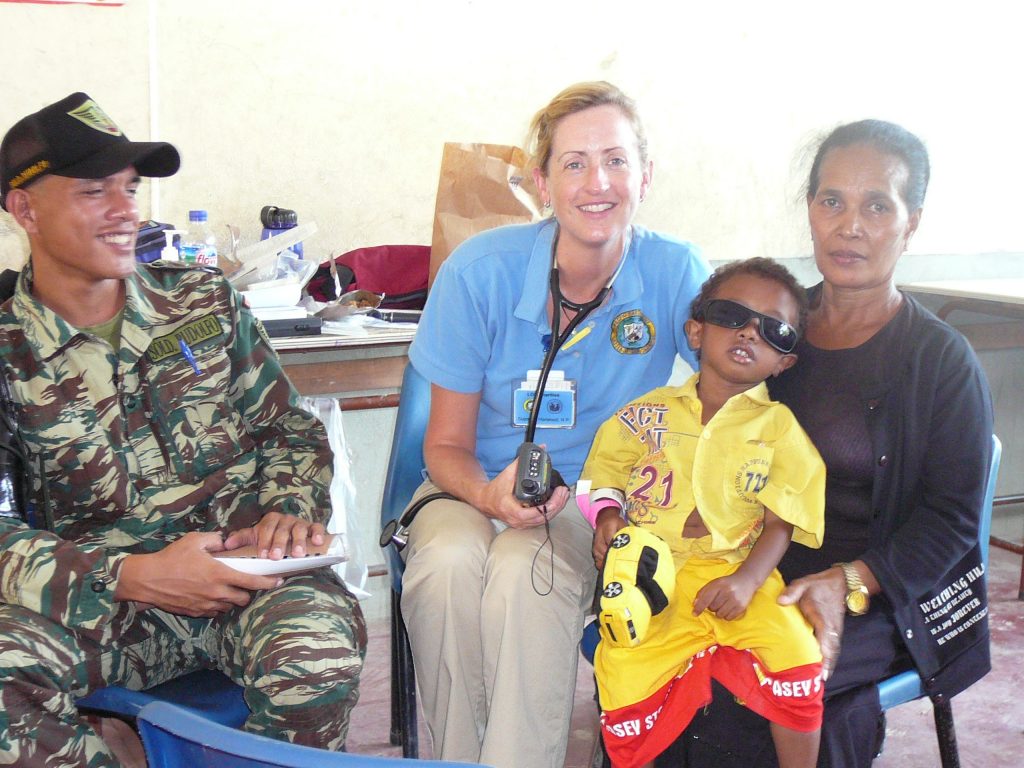 Harwood has worked in a clinic for low-income patients in Oakland, California for the past eight years. She knows she could make better money elsewhere, but loves her job.

“You know, I like all the people. The providers I work with, we all kind of work there because we want to work with that population. They’re not in it for the money, because you could make more money somewhere else. We’re trying to make a difference in the lives of people who don’t have the same opportunities as we do.”

A large number of Harwood’s patients are Latino. “And there’s just something about Hispanic people. They are the nicest people, they really are,” she says, “For the most part, just salt-of-the-earth people. Really humble, very generous, very grateful.” She isn’t sure she’d have the same experience working somewhere else.

“It’s my patients that I like. I enjoy the challenge of speaking Spanish, but most of all I feel like I’m making more of a difference than if I were working for a private practice. Eventually I might move over to a private practice, if that is what works for me in my life. The nice thing is I can help my family and friends, too. It’s nice to have a skill that’s so practical and usable and to be able to help people.”

Interview and article by Marintha Miles. Photos used with permission.

« A Model of Many Talents
Personal Revolutions »