A Vision of Eternal Perspective

At A Glance
Kristen Cox balances her family life with a career in government, negotiating a busy world with the added challenge of blindness. Having worked under three governors in Maryland and Utah, she currently works under Governor Herbert in the Office of Management and Budget. Here she discusses priorities, support systems, and the challenge of learning to be content while driven to achieve. And how the gospel message of eternal perspective makes all the difference.

You started losing your sight at a young age. What was that transition like for you?

It started when I was about eleven. It’s a genetic disease, this really rare thing that nobody else in my family has, but both my parents were carriers and it just showed up in me.

It turns out I’m fairly resilient, which is good. I think the hardest years were in my late teens and my early twenties. It was gradual, and I lost a lot of vision on my mission. I served a mission in Brazil [Belo Horizante, now split up into several other missions] and I needed to use this magnifying device so that I could read. That was becoming increasingly difficult; I couldn’t read the magnification enough and I was struggling. So I thought maybe I wasn’t working hard enough, so if I could just push through it…I could figure it out.

I got to Brazil and my machine got lost on my way down—with all the rest of my luggage—and finally, maybe six or eight weeks later, I found out it was broken. And I really had to spend the rest of my mission like that, not using my eyes! I had to start learning to use books on tape. My companion would help me out. Really having to learn those alternative skills, you know, listening to the Book of Mormon on tape and using readers, having people read to me….It was hard at the time, but it’s one of those lessons you look back at later in life and you understand why it happened and why that was important. It was a blessing in disguise.

How so? What do you feel you learned?

Well, I had to be pushed. You know, when you’re pushed off into the deep end of the pool and understand that you can actually swim? I’d been hanging on to the lenses and the little vision that I had, and it wasn’t working. I couldn’t keep up with my classes; it would take me like 30 minutes to read one page. I had to be pushed off into the swimming pool, and that gave me that push to know I could stay afloat. Many years after that I taught myself Braille. My first child was born when I was 26 and I didn’t know how to read to him, so I taught myself Braille. And then I had to learn how to travel, and all these other skills I had to learn to be successful. That stuff doesn’t happen overnight; those things take time.

I learned that I could tread water after that. I knew that I could really become proficient. And other skills, like just adapting to technology, and how to use computers, and just all these things you have to learn to be as independent as you can be.

Was there a specific aspect of the gospel that helped drive or encourage you during that time?

One is eternal perspective. That’s always a hard thing to come back to. I get pulled into the issues of the moment. I think getting pulled back onto why we’re here, lessons to learn, why sometimes we face the things we face, how we should deal with people. That’s my ongoing issue, is to get to that eternal perspective.

I think also the gospel is one of optimism; it is what it’s all about.

After your mission you went back to school at BYU. How did you start your career in advocacy and politics?

I started working on a volunteer basis in a non-profit and the president of the organization, the National Federation of the Blind, asked me to come do governmental affairs in Washington DC. So my husband and I went back and decided to just try it out. And from there I was an appointee into the Bush administration, then [Maryland] Governor Ehrlich asked me to come work for him and I ran for lieutenant governor on his ticket. And I came to Utah to work for Governor Huntsman and now Governor Herbert.

The governor just asked me to move to the Office of Management and Budget. I’m basically the Chief Operating Officer for the state and I’m over the budget. The legislative session is so crazy because you have to get the whole budget through and all that crazy stuff.

I don’t think it was so much a single organization I worked for that launched my career, but more some people along the way that believed in me; they had higher expectations for me than I had for myself. I had some very neat mentors that were really kind of hard: they didn’t let anything pass and had very high expectations about performance and results, and there were no excuses. Governor Ehrlich in Maryland took a big chance on me, running as his lieutenant governor candidate—a blind, Mormon young woman! Governor Herbert asking me on as his budget director! There are a lot of people giving me great opportunities along the way and I think that’s what has made the biggest difference for me. And hopefully we can do that as women for each other, right?

So you feel a need to reciprocate that?

Yes. There are so many women who have been good to me and I just think we need to be that for each other—to not be judgmental, to be supportive, to understand we each have our own path in this life and unique contributions. We’re not all going to be cookie-cutters, and I don’t think we’re supposed to be cookie-cutters in this life. And we need to support each other in our own unique ways. There are lots of ways for a woman to be a woman.

In a sense that’s part of the Relief Society calling, to uplift and support each other.

It should be, absolutely. To support, uplift….I hope I’m mindful of it. I don’t know that there’s anything I do deliberately, but there are women I work with and I hope that I’m mindful of the opportunities I was given and support them in being successful. By giving them feedback, having high expectations, and also being mindful that they’re maybe going to do things differently than I do, and to be okay with that. To understand they have lives outside of work, and to support them in those other roles and responsibilities, and to encourage that. You know, work is just one part of who we are. When you’re in the workplace it seems like a big deal, but we have all these other things outside of work that we have to respect and promote, and hopefully encourage people. So that’s important to me, letting people I work with also achieve that.

There are so many women who have been good to me and I just think we need to be that for each other.

What is it you enjoy about your work? What’s your motivation?

I’ve been thinking about that! Politics is a stressful job! You know, being in the political world, it’s hard because there are a lot of strong-willed people with lots of opinions. But I think it’s just that I like the challenge, and it’s important to me to make a contribution—a meaningful contribution—to my family and to the community. You have one life. There are only so many minutes, so many hours, so many days to actually achieve things. I don’t know, I sometimes feel this urgent fear or strong drive to make a difference as much as you can and with all the time that you have. 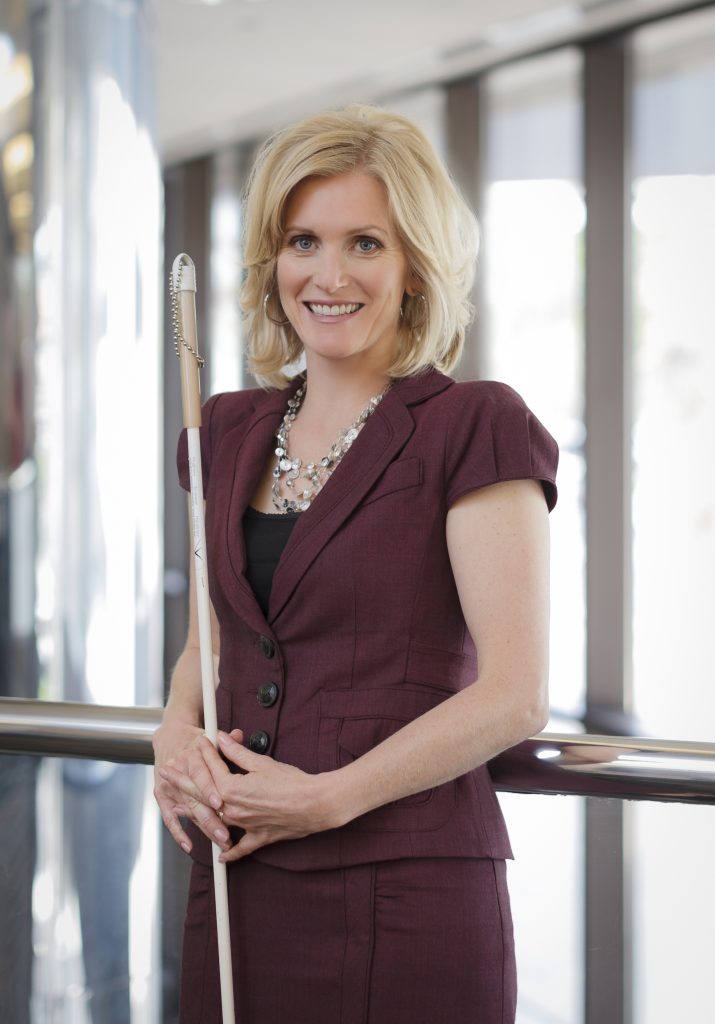 I know exactly what you’re talking about, I’ve often felt that myself, the need to “do something about it.”

It’s hard. There are a lot of different parts to life. The issue as Mormon women is you want to make a difference at home and yet we’re part of a broader society that has challenges too. I feel that we have an obligation in both of these.

What wou­ld you say defines and drives you, spiritually, in your work and in life in general?

That’s a tricky question, but I’d guess I’m a person of contradiction….It’s continual growth, that’s a big driver for me. Although sometimes that becomes too much and I can put too many things on my list, too many things to do, and it becomes overwhelming. And on the other hand, I have this desire for peace and contentment.

So it’s an ongoing challenge and a conflict—to grow, to want more, to want to be more, and also to be content with where you are, and who you are, and with what you have. I think the ongoing thing is to find the balance between the two.

How do you find the balance between, as you said earlier, family and the broader society?

It’s a challenge. What I’ve come to understand is, I guess, two things. One, some things you have to let go. My house isn’t perfect! I know I’ve got a lot of work to do on my house, but we prioritize, right? So there are just some things I’m willing to let go of because other things are more important. And that’s not right or wrong for everyone. Everyone has to make her own personal decision. But I have had to let some things go, and that’s by design.

I think the other thing is, there’s a time and a season. I don’t think you find balance every day. I do think you can find balance over a week, or a month, or over a year. I’ll be very busy for three weeks, and those three weeks will be insane, but I really protect my time with my family—that takes highest priority over everything else. So it’s really having to make priorities. Clear, deliberate priorities, what I’ll spend my time on what I won’t spend my time on. And then it’s also just a great husband and two great kids. That’s a great part of what my life is; what motivates a lot of what I do is making sure my kids are okay.

Is your family supportive of your work?

Yes, they are. We’re a good team! Just today my son and I went for a five-mile walk to kind of talk through a paper he’s writing at school. We talk politics and we talk ideas.  My husband’s super-supportive, so it’s a team effort around here. It’s a good team! It has to be a team effort, and then you just have to let some things go, and that way you can kind of pull it off— but never perfectly!

Do you aspire to running for office again at some point?

Politics is harsh. It’s a full contact sport! I would need a real specific reason, that there was just a vacuum of qualified candidates that didn’t share my view. If that was the case I would certainly consider it, but I don’t want to run just for the sake of running. I’d have to have a specific reason. There should be a purpose for running for office, not just “running for office,” and I would have to have that clearly defined for me to seriously consider it.

Occupation: Executive Director of the Utah Governor’s Office of Management and Budget