Banding Together As A Family

Married to Brandon Flowers, the frontman of an internationally-known rock band, Tana and her husband spend much of their time apart. To combat the common consequences of a public career, mother their three boisterous boys, and maintain intimacy in her marriage, Tana builds upon the skills she learned during her conversion to the gospel nine years ago by asking the Lord and listening to the Spirit for answers to the questions in her everyday life.

I’m not going to give him too much credit. Brandon, when we met, was 20 and I was 20. He wasn’t church-going. It’s really weird to talk about how I found the church, because it’s almost like it found me in a way. Being around Brandon’s family, I knew they were Mormon, but nobody was in my face about it. I didn’t feel like there was anything wrong with not being LDS. Brandon was in a band with The Killers’ guitarist when we met. Their band started moving along, and we started to drift apart a bit. We were still dating when I had this moment when I was driving and I just heard a voice say, “Read the Book of Mormon.” Which was a weird thing, because I wasn’t even thinking about that. But I felt a rush, like this was a good idea. It felt like that was the right thing to do, like, this is a chance—take it. So that night, I asked Brandon’s mom for a Book of Mormon. She gave me a Book of Mormon that Brandon’s dad meant to give to someone else, so it had his testimony in it, which was interesting to read. So I started reading the Book of Mormon, and I was just like, this is it. I’m so thankful to be a convert because the emotions I get from the Book of Mormon and the experiences I have are so new. I feel like in my experience with the church, we are all individuals, and that is one of the things I believe most strongly. Heavenly Father knew how to get to me, and He just gave me that chance. 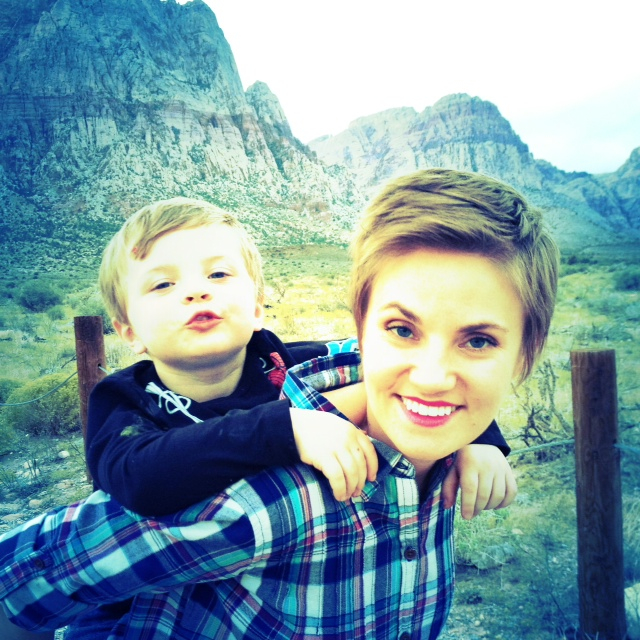 I feel so weird talking about my conversion because it doesn’t always make sense. Brandon will tell you, I was the furthest thing away from a Mormon; it was almost like dating me was a rebellion against everything he was taught growing up. I grew up with a crazy family. When I met Brandon and his family I thought, you have parents and brothers and sisters who spend time together? It was all new. The Church was new. Everything was new

So in raising your kids, do you feel like you have good examples? How do you navigate through parenting?

I couldn’t imagine being a mom without the Church. I can’t see it. Before I was a member of the Church, I had no intention of having children. I hadn’t seen families work out yet. There’s a John Bytheway talk I like to listen to and it says that you have the ability to change things for generations. And I just hope I do that for my kids. So it’s a lot of prayer and reading. Being a mom is such a weird blessing because it’s a lot of mini-trials throughout the day. It’s like, am I going to get mad about this or this? But at the same time, I can’t imagine having as much growth as a person without being a mom—spiritually and growing up. It gives me confidence, too. I have that peace of being happy with myself, being happy with my choices, being happy with who I am because of the Church. Motherhood isn’t really something I need to navigate because if I stay on my path, I feel comfortable.

I always fall back on asking for answers in my prayers.

How do you feel like you learn your path? What feelings do you feel when you know you are on the right path?

I just feel comfortable. I feel happy, I feel settled. I tend to be an anxious person, so when I feel anxious, I know that I need to fix something. So I ask Heavenly Father what it is that needs to be fixed, and I go through everything it could possibly be. It could be something simple, like it’s a pain to wash my face upstairs in the morning because the kids are awake—let’s just figure it out. So I’ll wash my face downstairs. I’m always trying to figure out how to make my actions easier and better. I just feel weird being so blessed to be at a point in my life where I can finally feel peace and feel calm and not have such chaos around me.

So when you do feel anxious or discouraged, what do you find helps you?

Oh, it’s hard. Sometimes, I’ll have a real problem with anxiety. It’s kind of tough because it’s medical and I have the symptoms. It’s hard to deal with. In the past I would go out for a run by myself, but I don’t have babysitters that will come and watch the kids that early in the morning. I always fall back on asking for answers in my prayers. One of my questions is: Do I need to take medicine right now or do I not need to take medicine right now to get through this? 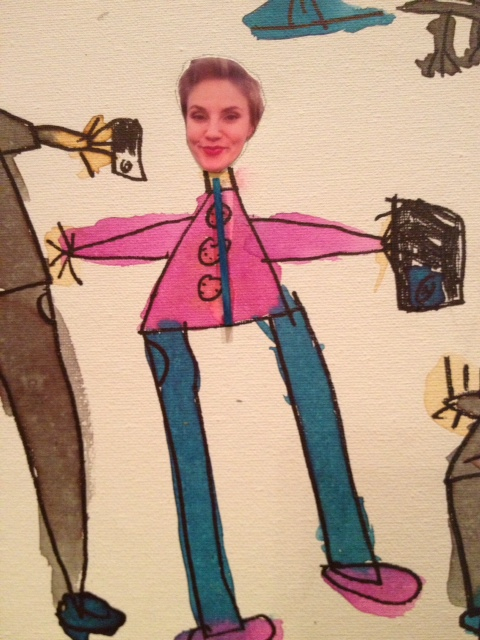 After I had Henry, I kind of went into a dip and got depressed. It was hard. It has to be something about having three kids in such a short amount of time. I probably did something; I probably tripped some wire and shorted a fuse in my brain somewhere! So I was having a really hard time struggling with that because I’m typically a happy, outgoing person. And then when I feel like that part of me is dimming, I get stressed, because I think, wait, that’s not who I am and I can’t feel like who I am right now because I’m having these symptoms. So after having Henry, I prayed about it. I always feel like my answers to my prayers zigzag: I get taken around a loop before I accept something that’s a little more out there than I would initially accept. So my loop was, I went to the doctor and got medicine, even though I don’t like being on the medicine because part of me feels like I’m giving something up. So I thought, there has to be some other way. I started looking at holistic solutions and herbal medications, so now I take herbal medicines and drink herbal teas. It works better for me. Heavenly Father knew I wasn’t going to go into an herbal store and say, “I’m here!” So he gave me the opportunity to find the answer for myself, which led me to take another risk. It’s so amazing the direction things go. So basically, to handle my anxiety, I ask questions and I just get led around and I try to listen.

With your family apart a lot of the time, how do you maintain unity?

That is hard. For instance, Ammon made a present today and it has Brandon’s picture on it, and Henry sometimes freaks out and wants his dad. Ammon has a really hard time—he’s anxious too—so he had a hard time at school when it started. He had separation issues. I’ll bring up Brandon’s absence myself to the kids and say, “I miss Daddy right now.” So I just try to let them know it’s okay to feel what they feel and to say it. It’s hard, but at the same time, I can’t complain. My husband has a good job. I think everybody has those challenges with jobs and other demands. It’s just something we all deal with. And I’ve been doing it for so long—being away from him — so it’s not really that big of a deal anymore. My personality does well with some time apart from my husband. Plus, I still get butterflies when I’m around my husband, which is great!

So what helps you deal with the distance in your marriage?

I don’t really deal with the outside world. I don’t ever go on the computer.  I don’t have a Facebook account; my husband and I are adamant about no Facebook. I have friendships, but I don’t seek friendships online. My husband is concerned about privacy with his work, of course, but I know he’s concerned for us too. So we just work on the relationships we already have more than seeking others. We have a really close circle of people around us. We’re not popular, so that helps our marriage. It’s more intimate for us. We don’t have friendships that take time from each other. Also, if my husband were not an active member of the Church, I would not be married to him. I just couldn’t do it, because I would not be married to a guy in a band on the road unless I knew what he believed in, and he stood his ground. I think having trust in my husband and his faith and knowing how strong his faith is definitely helps. I never feel preoccupied about what he is or is not doing. Heavenly Father blesses women. We have sensors and we know what’s going on. Brandon and I both work hard for our family and that’s our job.

Heavenly Father blesses women. We have sensors and we know what’s going on. Brandon and I both work hard for our family and that’s our job.

Is there an experience you fall back on when you are in need of more faith?

When I was little, I had experiences growing up when I was really, really frightened and I remember feeling comforted, like I was going to be okay. I remember just being little and feeling that peace and the calmness. There were scary situations. My mom had a really abusive husband. Now when I think about it, I can’t believe I wasn’t more terrified of these things. That feeling that I was going to be okay and I wasn’t going to be hurt is a testimony to me that when you need it, Heavenly Father will speak to you. You’ll hear something. I just listen to little things. I listen and I’m always trying to hear. Listening has always been kind of natural to me in a weird way but now that I’m a member of the Church, I understand where that comes from. All along I’ve had help and I’ve had Heavenly Father’s love with me.