Cathy Stokes is a firebrand, common-sense Mormon. A pioneering member who was baptized in 1979, Cathy’s willingness to speak her mind has shaped her faith and helped bridged gaps among members of the church. Cathy recalls some painful memories of growing up in Mississippi, shares a beautiful reflection on tenderness, recites her favorite hymn, and speaks of the abounding goodness of God and the strength of Mormon women.

I was born in Wilkinson County, Mississippi, in a little township called Doloroso. The root word for Doloroso is sorrow—and that’s for real. Life was so hard and punitive, and yet there were loving people of all races. But it was incredibly hard. I was the youngest daughter of six in a family of sharecroppers.

The family split over me—the world didn’t have Jerry Springer and Maury Povich in those days, but the issue was my paternity. My father said I wasn’t his. He was not a kind man; he was very abusive. I’m told he put a gun in mother’s mouth but somehow there was a distraction and she got away. Let me tell you how he died. He was living with a woman who he was physically and emotionally abusive to and she had an adult son. After my father had beat her, this son put a shotgun at the back of my father’s head and pulled the trigger. He died like he lived. And when my brother called me to say he was dead, I said, “Who killed him?” He was a tortured soul and I spent too much time hating him. But I got beyond that, for which I’m grateful.

I left Mississippi and moved to Chicago when I was five. My paternal great aunt got married and was too old to have children but she wanted a child, so my father gave her a price, she paid it, and it was a done deal. When we left Mississippi that night, we were a new family. I remember what we had for dinner; we had fried catfish and spaghetti. It was the first time I had ever experienced a plate. You know those little pie tins that you take back to Marie Callender’s for 50 cents? Everybody had a pie tin that they ate off of and you’d get your food and find someplace on the floor to sit and eat. So, there I was, looking at this [plate] and feeling the weight of it, and looking around to go sit on the floor. My great aunt took me by the arm and said, “We don’t do that anymore.” And I remember the tenderness with which she did it. I hadn’t experienced a lot of tenderness before. I’m grateful that because it was so hard, I know how good good is. To talk about “opposition in all things” [2 Nephi 2:11]—I know tenderness and I know its opposite, and I know tender is better. As Paul says, “[He] knows how to be abased, and how to abound,” [Philippians 4:12] and abounding is better. It absolutely is.

How were you able to reconcile your harsh family life as a child?

Everybody isn’t blessed with the kind of family that so many people are blessed to have. I heard a person I respect and have great affection for say that the most important thing in your life is your family. Well, the only problem with that is what happened to the first great commandment? The most important person in your life is your creator, the Lord thy God. After giving glory and honor to God, and the second great commandment is [love] your neighbor. I understand there is nothing more blessed than a wonderful family life, but everyone doesn’t have the same one and that’s okay. 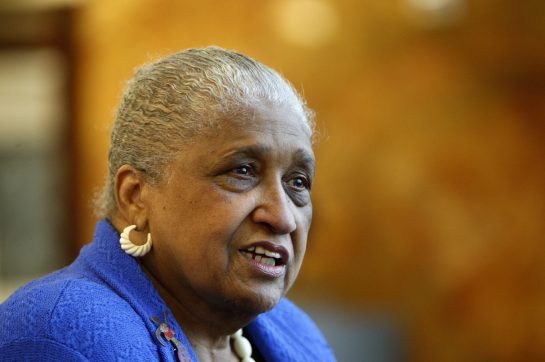 Also, unfortunately, the mindset that we’ve imposed on young women makes them feel less of a person if they’re not married. You’re born by yourself, you’re baptized individually, you are confirmed and endowed individually, and you will stand in the judgment individually. God loves all his daughters.

You mentioned you were the only one in your family to get an education. Can you tell me more about that?

I was the only one of my siblings who went to school. My brother was so proud when I graduated from college.

When we moved to Chicago, I was told that papa’s job (my great aunt’s husband) was to go to work and make the money, mom’s job was to help make money and feed us and take care of things, and my job was to do well in school. “You have to get all A’s,” they told me. So I did. I never knew failure was an option. That was a great blessing in my life because if you look at the social context I came out of, I was suppose to at least be a criminal. When I graduated from Hyde Park High School in Chicago in 1954, I got my picture in the Chicago Tribune as the outstanding senior in the high school. 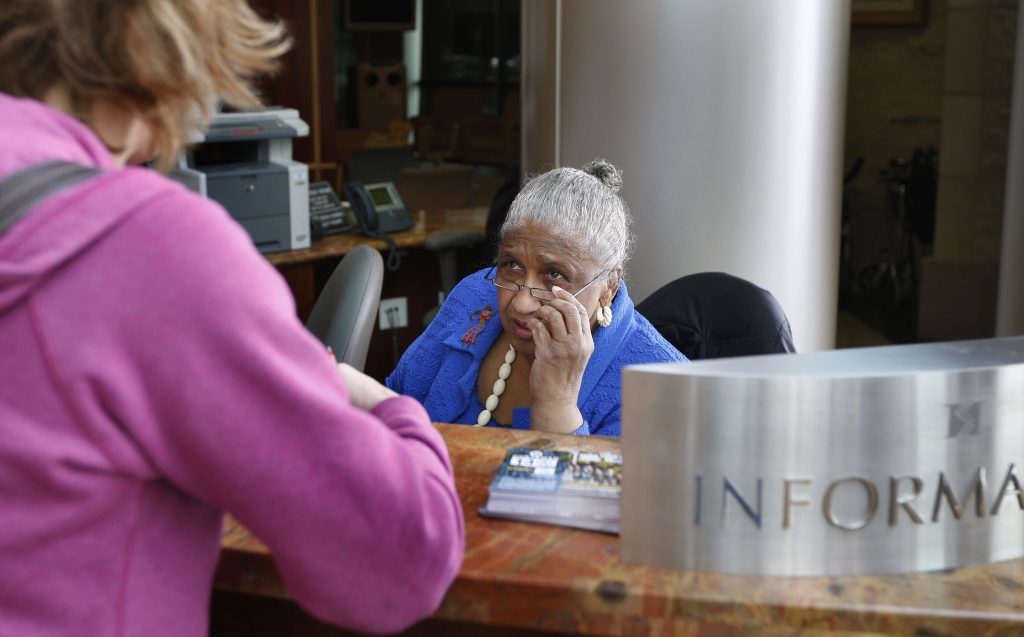 My papa and great aunt were very observant of the world around them. Papa was a bricklayer and the only time he could get a bricklayer’s wage was if he worked for the one black contractor in Chicago; the white ones wanted to pay you a laborer’s wage but he refused to work for laborer’s wage. He said you have to do what you believe is right. So I learn about integrity, I learned that you sometimes suffer when you stand for your beliefs. Challenges still come when you do the right thing or what you think is the right thing.

Service is the key to rooting out hate and the biases from your heart and mind and soul.

After high school, I went to the Michael Reese Hospital School of Nursing. It was the largest private medical center in the Midwest at that time; now a group of physicians own it, and the school no longer operates. I went to DePaul later to finish my bachelor’s. God enabled me to get a great education.

What brought you to Salt Lake City?

I moved to Salt Lake after living 65 years in Chicago because I was looking for a place that had less density of population, where the winters were lighter—those Chicago winters are brutal—and a place where I knew a lot of people I cared about. It was Salt Lake hands down. And so here I am.

Tell us about your conversion.

My mother was Methodist, my father was Baptist, but I went to all of them, including the Lutheran church and the Unity School of Christianity—that’s the “power of positive thinking” people and that was a valuable experience. Then, while on a trip to Hawaii, I visited the Honolulu Temple and filled out a visitor card. I didn’t think I’d actually hear back from them. 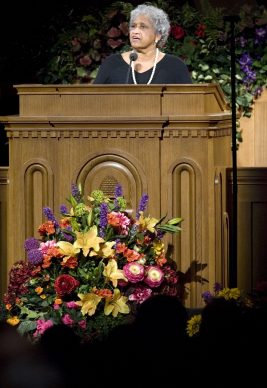 Speaking in June 2008 on the 30th anniversary of the LDS Church announcement ending the ban on blacks in the Mormon priesthood. Photo courtesy Salt Lake Tribune

I was impressed with the missionaries. They were weird little white boys, but I marveled that they’d pay to give up two years of their life at that age to teach people the gospel. And then when I went to the ward, I was impressed with the fact that they didn’t pay the bishop. I knew that was right. The correlation between what they said they believed and the expectation was very close. The way they handled the children and the young kids also endeared me. I had questions then and I have questions now, but the things I do understand bring such peace and enlightenment. I was baptized on April 28, 1979. I came to love everyone in that Hyde Park family ward. I got to serve them. Service is the key to rooting out hate and the biases from your heart and mind and soul.

Whatever choices we make, we must cherish one another.

How do you serve now?

My goal is to leave everyone better than I found them. I volunteer a couple of days a week at the Huntsman Cancer Hospital; that’s the best part of my week. I greet people and help answer questions at the information desk. Most people need information, and some need to cry. You have the ability to serve and comfort. When people come in with little babies, I tell them, “Excuse me, we have a rule that I have to certify the baby.” And then I look, and say, “Yep, he’s a cute kid, you can go,” and they laugh and it lifts them a little. It’s a wonderful place.

I’m also the chorister in the Salt Lake 11th Ward. We sing some hymns a capella. I have so many favorite hymns: “Abide with Me; ‘Tis Eventide” is powerful. “We Thank Thee, O God, for a Prophet”—many of those songs of the Restoration are beautiful. “Redeemer of Israel” speaks to me. Music is in my DNA. The old spirituals are generally sorrowful, but then there’s “In That Great Gettin’ Up Morning,” and the gospel songs like “His Eye Is on the Sparrow” make me happy. I love the words to “Great Is Thy Faithfulness”:

We don’t talk about God’s faithfulness to us too much, but He is.

You’re known throughout the church as someone who speaks her mind and asks hard questions. Is that a fair statement? If so, how has it shaped your faith in the gospel?

Oh my gosh, it’s always gotten me in trouble. In the fifth grade, I went to a Catholic grade school and got in trouble because the nun said that everyone who wasn’t Catholic was going to hell. I raised my hand and asked, “Is that really true? I don’t think that’s true.” They marched me down to the Mother Superior and expelled me from school. At that moment, I knew I was going to die. I thought my parents were going to kill me for being expelled. So I stopped at the candy store on the way home and spent a nickel on candy—you could buy a lot of candy with a nickel—and walked slowly eating my favorite candy because I knew I was going to die. When I got home, papa asked why I was home early and I told him what happened. You know what he said? He said, “I thought it was time for you to come out of that school anyway.” At that moment I knew there was a God!

Who are your mentors?

My mother who raised me. She was uneducated but bright. She helped me move on in life. Eleanor Roosevelt. Hillary Clinton. Belle Spafford, the former general president of the Relief Society— her involvement in the community is inspiring, I think we would have gotten along. 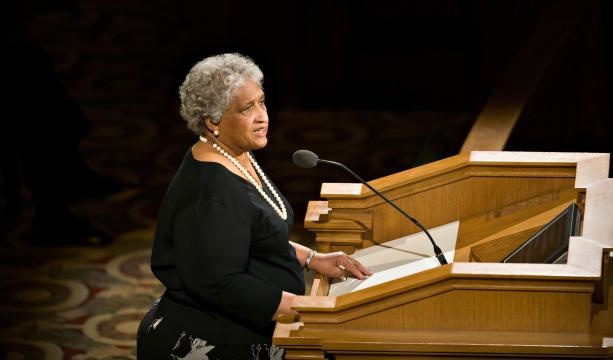 If you could say anything to women in the church, what would it be?

Know who you are. Know what power lies within you. Get on a first-name basis with your Father in Heaven. Pour out your heart to Him. You got to get personal with Him. Know what He wants you to know and do what he wants you to do. And always be a proud woman of faith, never apologetic of who you are and what you believe. Never ashamed.

« "My Life Changed Completely" – en Español
In the Lord’s Time »