From Concerts to Correlation

A gifted young pianist, Ruth was encouraged by musical professionals to consider a concert career. But a father’s blessing at age 16 told Ruth that the Lord had other plans in store for her. Instead, Ruth was the youngest person called to the Church’s general boards and served as the Young Women’s General President from 1972 to 1978.

Piano was my whole life from a very young age. Music gave me identity. I was different, I was sought after, I was recognized, I was featured. I had all the blessings that are attached to that situation.

I have never been able to stay away from the piano. I only have to sleep a few hours each night, so I often practiced in the early morning hours. My family and my three poor little brothers had to survive hearing music all the time. My father thought it was heavenly.

When I was just four years old, we had a player piano. My father told me, “Ruth, when  you are able to play Mendelssohn’s ‘Rondo Capriccioso’ (which he loved so much) I will get you a grand piano.” So I practiced hard. He purchased a Baldwin grand player piano and I was passionate about watching it and listening to it and trying to catch the keys as they played the Mendelssohn by themselves. I first performed the Rondo Capriccioso when I was fourteen, and after that, it became my signature piece. 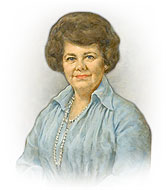 I have many wonderful stories associated with that piece. My aunt, Alice Louise Reynolds, often entertained important guests, and she brought Helen Keller to our home one time. Of course Miss Keller was both deaf and blind, but she walked to the piano, put her hands on the wood and listened to my playing through her touch.

During my teen age years I had a few lessons with Leopold Godowsky, a famous pianist, who had a friendship with my teacher and visited Salt Lake City on a few occasions. He encouraged me to pursue a concert career and to study at a conservatory in the east. We thought long and hard about this possibility. My father said he would give me a blessing so I would know what I should do. With my parents we fasted before the blessing. Mother came in the room, and my father blessed me: “Your Father in Heaven wants you to continue with your work on the piano, but as for a concert career, He has other things in mind for you.” The way my life has unfolded, everything was based on that blessing.

Several other times I had the opportunity to follow great teachers and launch a career of my own, but I would always go back to that blessing. I performed and taught and kept the piano in my life. In fact, when we moved into our first home — which is the home I still live in 64 years later! — we got a piano before we even got a bed. I had worked and put my husband through dental school instead of pursuing the piano career, so his gift to me was to get me my own Steinway before we got anything else. It’s there still, in the same place it’s always been in.

Today, I have no feeling in my fingertips. I’m blind now, have hearing aids… I can’t play anymore. The only time I cry about getting old is when I go in the living room and see that piano, so I seldom go in there.


My father blessed me: “Your Father in Heaven wants you to continue with your work on the piano, but as for a concert career, He has other things in mind for you.” The way my life has unfolded, everything was based on that blessing.

I had such a passion for my music. To this day, I have a passion for it, which is why my current state is so cruel. My passion for music when I was young was so great that it consumed every other thought. I realized more and more how I simply could never have handled a top concert career and a family. After I got married, I could not give that passion to music and give the passion I wanted to my husband. I wanted to be able to give my all to my husband. I was madly in love with my husband and I was madly in love with the piano. I had to choose. 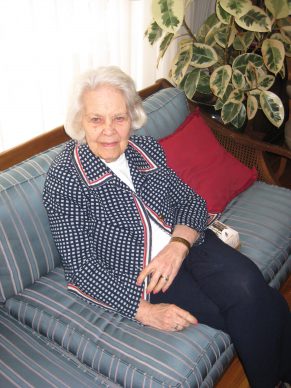 When I was Young Women’s President, Harold B. Lee, who was then in line to be the next prophet, was given the responsibility of reviewing all of the Church’s materials. This was called “Correlation”. I was called to President Lee’s committee. Our current prophet, President Thomas S. Monson, was called to be on that committee too, but he was just a little guy then and he reported to me!

I served on Correlation for 10 years under Elder Lee, and then I was made the chairman of the committee to rewrite the Church’s lesson manuals. Then, when Elder Lee was made prophet, he called me to be the Young Women’s president. I was in that position seven years from 1972 to 1978.

What are you most proud of accomplishing in those seven years?

Before me, the young men and young women of the Church were completed separated. That was the Mutual Improvement Association [MIA] program. I strongly felt like they should do much more together. We developed a whole new program, starting from scratch, which resulted in the Young Women program we have today. I had entirely different people on my board: they were thinkers and women of the scriptures rather than experts in music festivals and dance festivals… We still had those fun things, but we tried to focus the program more on doctrine and the scriptures and developing the young women’s testimonies. When President Lee called me to Young Women’s president, my husband Mark told President Lee, “When I married Ruth, I knew I was going to have to share her with the world.” And he did. I traveled all over the world in my work for the Church and it was marvelous.

What would you suggest to young women now who are faced with marriages and family, but also with things they love to do?

You have to go to the Lord. I pled with the Lord: “Guide me the way you want me to go.” You have to know yourself, and then go to the Lord to clarify your decisions. What I chose is not for everybody. I think most people are able to achieve a balance in their life and they can do a family and follow passions and careers. I did not have moderation in my passion. I know many wonderful women who do have moderation in their lives, and they do many interesting things.

I became a fine conductor. I went to East High School and taught hundreds of students there. I could do that, and it didn’t interfere with my family in any way. I’ve lived my life trying constantly to consult the Lord and learn what He wants for me, balanced against my own natural inclinations.

I could go on and on about the miracles in my life, but if it hadn’t been for my father’s blessing when I was 16 it wouldn’t have taken the amazing path that it did. I have been blessed — or cursed! — with only needing a few hours of sleep a night. I was able to practice the piano more because of it. Now that I can’t do any of the things I love, it is truly a terrible thing to deal with.

Now, I can’t walk without a walker. I have to accept help. I have dozens of people come to me for help… with marriages, what to do with their professions… I tell them how valuable it is to keep up with their skills and stay strong in their profession. I can’t do much myself anymore, but I try to do all I can to encourage young people to go ahead with what they love.

« The Cycle is Broken
"To Whom My Heart Responds" »