From Dancing to Diapers

Lisa Jones is the mother of two sons, one on a mission and one in high school. But before she was “mom”, she was a soloist with the New York City Ballet from 1975 to 1985 and a favorite of the company’s founder George Balanchine. Lisa talks about these two distinct eras in her life and why she was so ready to transition from being focused on herself as a dancer to being focused on others as a mother.

What was the role of ballet in your childhood?

Both of my parents were involved in dance and theater and I basically was dancing in the womb. I came out dancing! My mother was a dancer and my parents were always in the studio or in a theater. That was the environment in which I grew up. I remember being maybe 3 or 4 years old, dancing around the big girls in a ballet studio, holding on to the barre… And then when I was 5 years old, I gave my first solo performance in a little mint green tutu. I remember taking a bow — it was the first time I had experienced applause — and thinking all that attention was so wonderful! It was so exciting! To have all those people clapping for me!

My next strong recollection is from when I was about 10 years old and my parents and I drove eight hours to Dallas so I could audition for the San Francisco Ballet’s summer program. When we got there, my parents were told that I was actually too young to audition: The entry age was 12, not 10. But when my parents told the people running the audition that we had driven 8 hours to get there, they let me audition anyway. A few weeks later I got a letter saying I had been accepted into their summer program. So that was my first scholarship. Subsequently, every summer after that I had scholarships to study at different schools. I was at San Francisco Ballet for a couple of years, then the Harkness School of Ballet, and then School of American Ballet and American Ballet Theater.

At age 16, I accepted a winter scholarship with the School of American Ballet and moved to New York City. George Balanchine [founder of the New York City Ballet and its feeder school, School of American Ballet] first saw me dance in a rehearsal when he was choreographing works for the Stravinsky Festival in 1972 [a festival to honor composer Igor Stravinsky who had died the previous year]. I was wearing a red leotard with a white skirt… and he liked what I was wearing. He told the costume designer that he wanted the same look in the Stravinsky Festival. Two days later, I was invited to become an apprentice in the New York City Ballet. I was 17 years old. I joined the Company as a full time member in 1975. 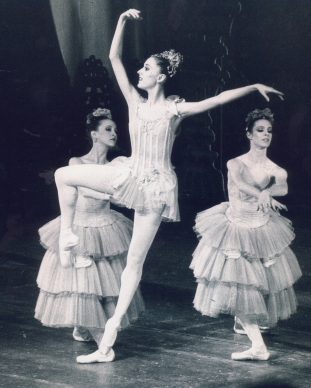 When you arrived in New York, did you remain committed to going to church?

Yes, I went right away and joined a Family Home Evening group. I was fully committed. I feel like I’ve always been blessed with a testimony. It’s never been hard for me to believe. Those first few years in New York were so busy — we would go on tour and sometimes I would perform on Sundays — but I always felt like the Lord was there with me. I would ask Him to keep me strong and healthy and to help me perform well, and I always knew He was there.

I never actually lived by myself when I got to New York. I had a cousin who lived with me at first, and eventually my younger sister came to New York to dance in the company as well.

Did members of the company know you were Mormon?

Yes they did. In fact, Mr. Balanchine liked the fact that I was religious. He was a very religious man, and he liked his dancers to take care of their bodies. So he liked that I didn’t smoke or drink.

Mr. Balanchine liked the fact that I was religious. He was a very religious man himself, and he liked his dancers to take care of their bodies. So he liked that I didn’t smoke or drink.

My peers certainly partied, but I never felt pressure to join in. I loved classes, I loved performing and I worked hard, and I had lots of good friends. I’ve never felt like it’s hard for Latter-day Saints to be involved in the performing arts. It was a total joy for me.

Was there a role that was a particular highlight in your career?

Well, it was always a big deal when Mr. Balanchine picked a new young dancer for the role of the Sugar Plum Fairy in New York City Ballet’s annual production of The Nutcracker, so it was very exciting when he picked me to do it in 1982. I also loved dancing the role of the Dew Drop Fairy in The Nutcracker. One particularly hard role for me was as the Third Theme in The Four Temperaments. The role required a very agile, limber dancer and I was more of a leaper and jumper. I remember crying to the ballet mistress: “Why is Mr. Balanchine casting me in this role?” And she replied, “He wants you to grow. He believes in you.”

How did you transition from ballet into motherhood?

In 1983, I was a soloist and Mr. Balanchine was giving me lots of roles to dance. But then he got sick and passed away. The whole company was in transition after that, and it felt like a natural time for me to move on. I got married around that time as well, at age 28. It felt like it was the right time to start a family. 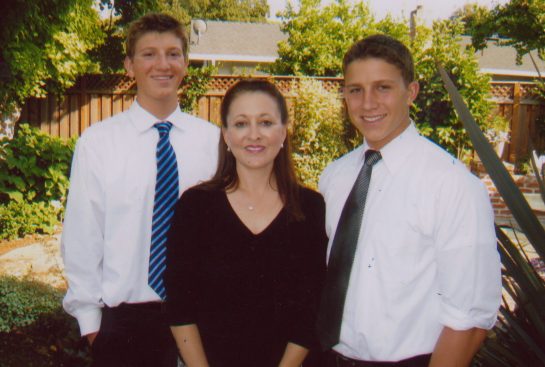 It took me four years to get pregnant, though. My husband’s job took us out of New York and we moved around to several different places. I continued dancing in local companies. I was 32 when I got pregnant with my first son. Then I transitioned into teaching and choreographing. That was something I could continue doing while I was pregnant and for a while after I had my first baby.

Were you emotionally prepared for motherhood, or did you miss what you had left behind?

Motherhood was something I really wanted to do, I was excited about it and I was ready for it. I made a clear decision to transition out of the career. I had to actively choose motherhood; it wasn’t just going to evolve.

I had to commit myself to this new life, not just try to work a baby into my career. It was a bit of a transition for me to go from performing to full-time motherhood, mostly because my career in the ballet had all been about me: how my body looked, what my costume was like, how strong I felt, if my make-up was on right… And then motherhood was all about focusing on someone else.

I loved having young children. I made such wonderful friends with other mothers when my boys were young, and I loved doing little kid things with them… going to the zoo and Chuck-E-Cheese and the playground… Things I didn’t get to do as a child because I was always in the ballet studio. I don’t think I did fun things with my boys in reaction to being deprived of them in my own childhood, but I certainly thought how fun it was for my boys to have these experiences. I loved seeing my children get to do the things that I didn’t.

When my two boys were young, I didn’t feel any need for them to know about my past life. We had photographs of me performing up around the house, but it wasn’t until my older son was in high school that he actually Googled me and found all these references to me in programs and reviews. I think that’s when it became real for him: “Hey mom, you were in the New York Times!” But it didn’t change anything between us. I was still just mom.

« Love That Multiplies
Spirit in the Law »