On Listening, Music, and What it Means to Be Human

Catherine Ramirez is a professional flutist and teacher whose music has been described as spiritual, elegant, acrobatic, and earthy. When she speaks about her musical achievements, she’s modest. But when you hear her play, her passion is hard to hide. She shares how her Latino heritage influences her perspective and performances, and how we can all learn lessons from music when we stop to listen.

Tell me about your spiritual journey.

I grew up Catholic. My family attended mass every Sunday. But in college, I drifted away from the church and explored other religions, including Buddhism. I also explored the Unitarian Universalist Church. I believed in God and Jesus Christ, but I felt a need to explore. I didn’t really know what I was looking for. I was just following whatever it was that was moving me to explore. 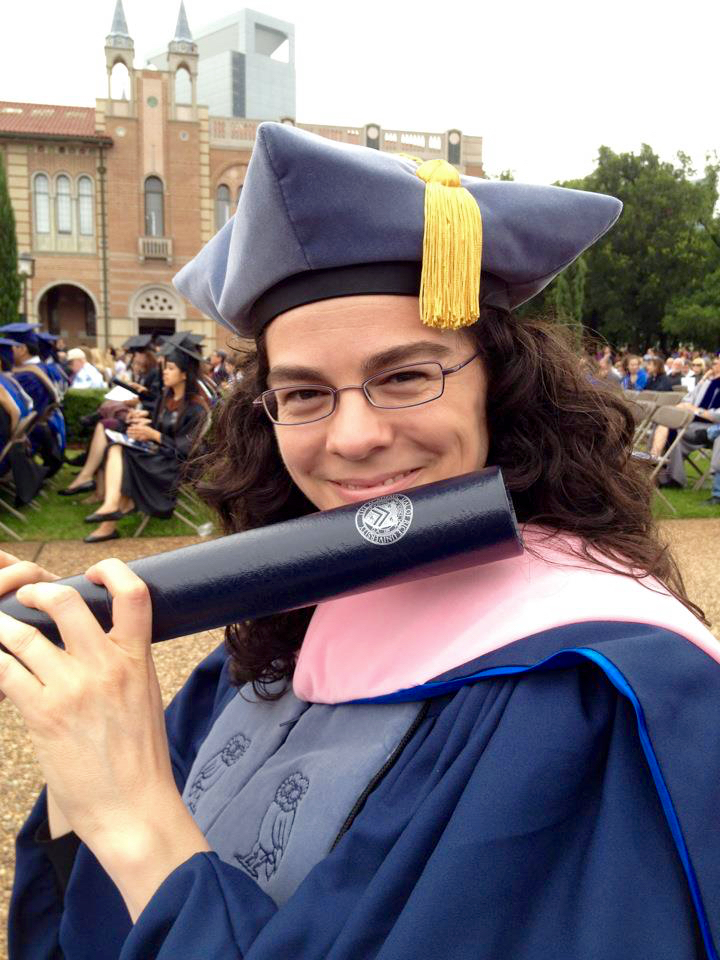 On a summer day in 2002, while a graduate student at Yale University, I got an email from a high school friend from Texas who said she had seen my riding my bike around New Haven, and invited me to church. I had always admired her and her family. I went to church with her in August 2002 and was baptized in December 2002. When I joined the church, it was hard for my family to accept, but they eventually saw that it was a good thing for me. My mom, sister, and I have had spiritual conversations and there is a lot of alignment. We respect and love each other.

When did you begin playing the flute? And what made you decide to pursue it as a profession?

I started playing the flute when I was 12 through the public school band program in Texas. Honestly, I started playing because of a cute guy in band [she laughs]. It wasn’t until my senior year of high school that I took private flute lessons. It came easily for me. I’ve always loved the wonderful energy of making music with others. I went on to get a bachelor’s in flute performance from Occidental College in Los Angeles. In between my junior and senior year, I enrolled in a summer course in France with a really great French teacher, Christian Lardé, and audited a class from Italian teacher Marzio Conti. There was something about Marzio that was so inspiring. When he talked about the music, it was like he was dancing. As musicians, we often get so detailed but we mustn’t forget that music is an abstract art. There’s this energy and motion through sound that’s so important to keep in touch with. And Marzio was filled with this love and passion and movement for music.

“In some way or another, all music is an expression of what it means to be human.”

Because of that experience, I applied for grants to go to Italy to learn from Marzio but nothing worked out. So, after working two jobs during the summer and getting a generous donation from my brother and dad, I was able to go to Italy for a year after college and take an accelerated course with Marzio. After Italy, I completed a master’s in music from Queen’s College in New York and from Yale. I freelanced for five years, playing with several orchestras, performing lots of chamber music, doing solo recitals, masterclasses, and teaching traditional and Suzuki flute lessons, as well as auditioning and coming close to winning several jobs, before I decided to do my doctorate at Rice University.

How would you describe your style as an artist/musician?

My first flute teacher once said that my flute artistry is “conversational.” I really like that. I try to have a conversation with other musicians and with the audience through music. I’m most interested in the energy flow part of the conversation though. Depending on the music being performed, sometimes that energy is really easily received. Sometimes it’s uncomfortable or difficult to receive because what the music might be saying is so true — kind of like a glowing red-hot sword piercing our misconceptions, our weaknesses, our biases — and inciting us to change or acknowledge something within ourselves that’s hard to face, and yet, still giving us the courage to face it. I believe music has that kind of power. If we really listen, it really does have the power to change our lives.

Is there a particular composer that moves you?

In some way or another, all music is an expression of what it means to be human. There are some days when Mahler is medicine for me, or Christian rock, or Ravel, or blues, or jazz. Or Bach — give me some Bach any day. And Mozart, of course. I just came from a Mozart concert. It depends on my mood or whatever I happen to be falling in love with. There’s room for all of it.

How do you stay disciplined in your music performance?

It’s true what they say — if you don’t use it, you lose it. If you don’t practice, your skills evaporate. When I practice every day with a proper warmup, especially after not playing for a few days, I can feel the power come back into my fingers. I’m more sensitive and aware of my body — I can command the air and expand within myself. It all starts to come back. I want to keep improving to become the best musician I can possibly be—to share my music with others. 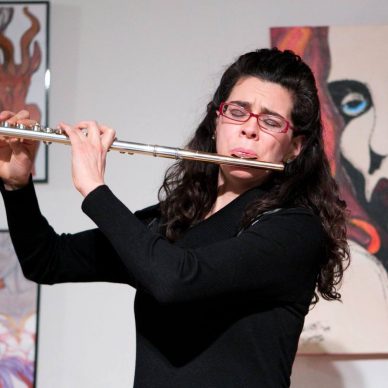 Performing is who I am. If I don’t do that, I don’t feel like myself. Performing feeds my teaching. In my teaching, I try to help a student access the music to ultimately comfort, inspire, or give hope to others.

The professor has to be just as teachable as the student. I ask lots of questions when I teach. I want to know what the student is experiencing so I can help guide them. Without that information, I don’t know how to help a student. There has to be dialogue. I learn just as much about playing from my students and the struggles they’re having. I also see general human qualities — the beginner learning for the first time, the intermediate student who knows something already but may have doubts and difficulties. The teacher lays a foundation to work through these obstacles.

What are some of your most memorable experiences performing?

There ought to be a special feeling for every performance.In one particular moment in my New York recital debut, during Toru Takemitsu’s “Voice for Solo Flutist,” I took a risk and went for a much softer dynamic and I remember feeling this immediate connection with the audience. They could sense me taking a risk and were in it with me. That moment was really powerful. Another moment was while playing a movement from a concerto with the St. Olaf Orchestra in the Xi’an Concert Hall in China, I thought of the terra-cotta warriors and the ancient history that surrounded us, which was so humbling. Another memorable performance for me was playing at a small convent in Bogota, Colombia, where my mom was born. It was just me and my pianist friend, my family, nine nuns, and a plate of cookies in a small common room with an upright piano. There was a beautiful feeling there.

“The professor has to be just as teachable as the student. I ask lots of questions when I teach. I want to know what the student is experiencing so I can help guide them. Without that information, I don’t know how to help a student. There has to be dialogue.”

At the opposite end of the spectrum, I recently played Bach’s St. Matthew Passion with the St. Paul Chamber Orchestra and the Gabrieli Consort Singers. It was an intense experience play this three-hour masterpiece with fantastic musicians in a beautiful new concert hall to a full house. I was seated near the front of the stage and remember a young man in the front row having a hard time sitting still and being quiet. Even though I could only see him out of the corner of my eye, I decided to play only for him for a moment, as if to say, it’s okay, here’s some music just for you. At intermission, I saw this young man had Down syndrome. I was glad to have offered this music to him, and hoped that he could feel that beauty as well.

When you played in Bogota, did you feel connected to your roots? Do you feel like that latin influence inspires some of your playing?

I love Bogotá — the people, the food, the nature, and the smell of the city, especially the smell of bread around the corner from my grandmother’s house. Colombia is part of who I am. I’m also American and Mexican American. All of this is part of me and it all influences my playing.  It’s not just that certain rhythms feel as though they’re in my blood, but it’s a perspective from where I see the world. 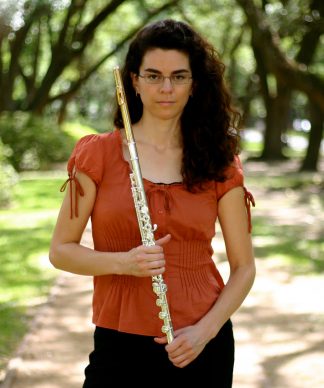 I have two. Alma 32:27: “Exercise a particle of faith, even if ye can no more than desire to believe, let this desire work in you, even until ye believe…” And D&C 123:17: “Let us cheerfully do all things that lie in our power; and then may we stand still, with the utmost assurance, to see the salvation of God, and for his arm to be revealed.”

What advice would you give to women who are interested in the arts?

Trust yourself. Believe in your dreams and proceed with as much faith and diligence as you can. Pray for guidance and express your gratitude for all the help you receive along the way. 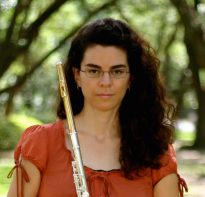