The Spirit of the Islands

Born into the Church in Samoa in 1944, Safalaia attended Brigham Young University, Hawaii, and was among the first group of dancers to open the Polynesian Cultural Center in 1962. Safalaia describes how the PCC helped her gain a greater appreciation for her own culture and for the church’s missionary program.

I was born in American Samoa on April 27, 1944. My great-grandfather is known to be the father of the Church in Samoa. His son was very sickly, and he went to all the ministers at that time and they couldn’t make him well. My great-grandfather noticed these pagalagi, howlie missionaries. (Pagalagi is Samoan for Caucasian and howlie is Hawaiian for Caucasian.) He sent one of his sons to call them over and so he did. They blessed my grand-uncle and he got well. So the whole family joined the Church, and there was a lot of family. I think he had about eleven children and a lot of them were married, so they all joined the Church. They were the ones that began the Church in Samoa because of that blessing.

Tell me about your experience at BYU Hawaii.

I didn’t want to go to the Church College, which is what Brigham Young University, Hawaii, used to be called. My girlfriend and I were planning on joining the military service, but my mother found out about it and she said no. She took me directly to school. I was embarrassed to go to the Church College of Hawaii. I didn’t have any money, but I got a scholarship. All I thought was that I wanted to go see the world with my girlfriend. But my mom had better ideas than I did and I’m grateful. My friend didn’t go to school, but I did. I’m glad my mother made that choice for me. If I had gone into the service, I don’t know where I would have ended up, because my values, you know…. I was just out of high school. So young. At the Church College, we learned Church values and we learned to talk about the Church and how to apply those values in our lives more.

My mom, she had so many children; she had all of us and two grandsons because my sister just left them and she didn’t take care of her children, so we were raised as siblings. We had eleven children in my family, including my two nephews who became our brothers. 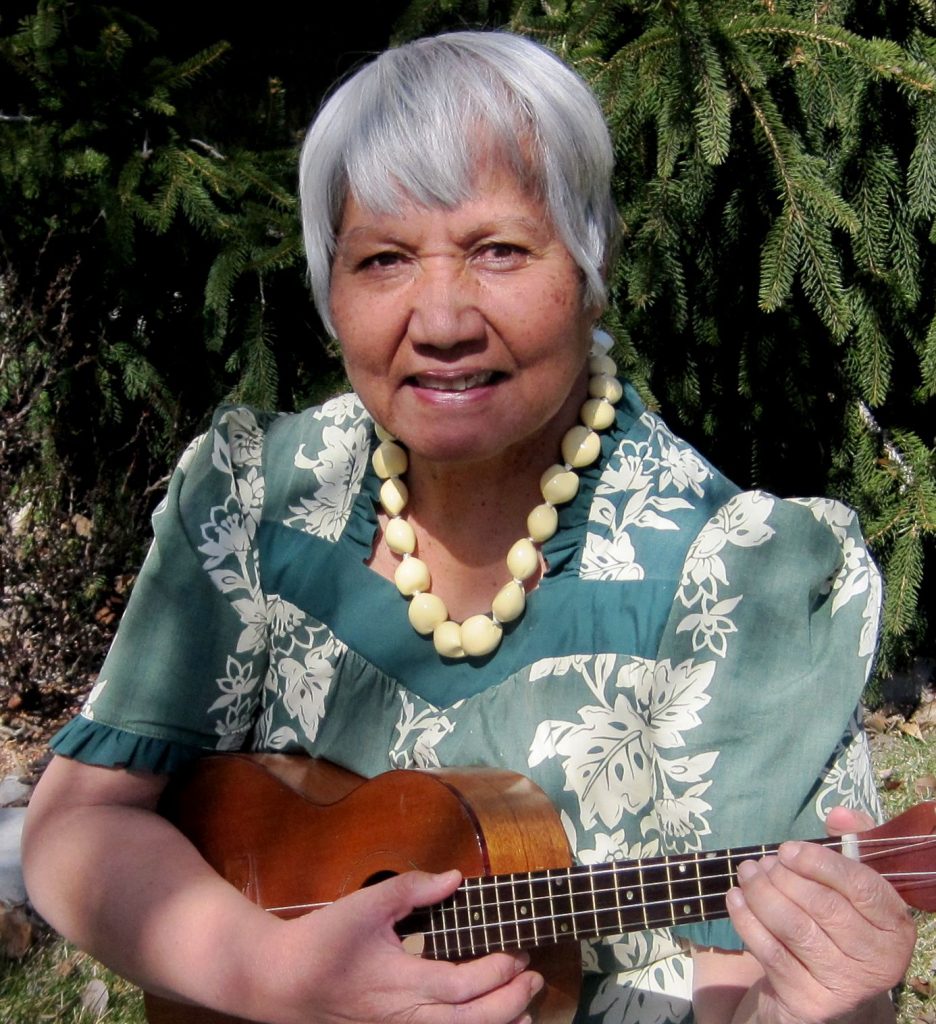 I decided on a major by looking for the easiest thing to do, because when I went to school I wanted to have fun, not study. My mom said, “As long as you go to school it is good.” I needed someone to teach me how to focus. I didn’t know. I went down the easy route.

How were you involved with the Polynesian Cultural Center?

In 1962, President David O. McKay felt that because the Church College had so many Polynesians, it should be a place to show how the Polynesians live and to show how they are so similar in their songs and traditions.

I was among the very first group of dancers to open the Polynesian Cultural Center. There was a Polynesian program and a Maori program, where we were taught how to do Maori dancing and different types of hula, and we got into Tongan dancing, but I never did get into the Tahitian dances because I didn’t care for the hips swinging kind of thing.

The idea for the PCC started because in the Laie Ward that I was in, we did all these dances at our ward parties, our hukilaus. At the hukilaus, we had Hawaiian and Samoan and Maori students, and from those dances the idea of the Polynesian Cultural Center came up. It started in my ward, representing the students who came in.

I was selected to dance this solo dance when we went to the Hollywood Bowl in 1965. Taupou means “king’s daughter dancing.” My mom made our headdresses and things, things that are really hard to wear.

I love dancing Samoan, and in the Samoan section of the PCC we had taupou dancing. Taupou dancing is originally from Samoa and it is when just one female dances on stage. I was selected to dance this solo dance when we went to the Hollywood Bowl in 1965. Taupou means “king’s daughter dancing.” My mom made our headdresses and things, things that are really hard to wear. My mom had the tapa to make into a blouse, with a top and a strap. She would use cloth to bind my hair with ribbon and then attach the headdress. It was tight and it hurt. Then my mom dyed hair blonde to attach around the headdress. Coconut midrib parts from the leaves were held together to keep the mirror on the headdress in place. Then they put feathers around the sides and they intertwined them, and then there was headband around everything. We had teeth, like boar’s teeth, and of course we had a top and waistband and a bottom. Then we would oil down our skin with coconut oil. I loved it. I was very shy and dancing was something I wouldn’t do except on the weekends at the Polynesian Cultural Center.

Who did you meet while participating in the PCC?

I met a lot of Maori friends, Tongan friends, Samoan friends, Hawaiian friends. I’m very shy and just don’t mingle that much, but because I was a part of the show I got to make a lot of friends. It opened me up to knowing friends because we were interacting by dancing.

How long did you work there?

I worked there for four years and then I quit because I had too much PCC and couldn’t concentrate on school. I really enjoyed it, but I had to concentrate on my school or else I wouldn’t be able to graduate. The best part was that it helped take me out of my shyness and also to be part of the culture that I was very proud of.

The Polynesian Cultural Center helped me learn my culture. You hear about it and you see your people doing it, but when you become part of it you learn. It was very exciting to be in the very first group and it was very special to be a part of it, to be the nucleus of where the whole concept of the Polynesian Cultural Center started. In fact, we were there when Elvis Presley came to visit. I heard he was really happy during his visit. He was supposed to depart but he stayed and became part of the festival and we honored him. I was told that Elvis Presley was very touched and really loved his experience at the PCC. I would like to see a video of that.

Did you ever travel with the PCC?

We performed at the Hollywood Bowl in 1965. The Church supported the PCC’s tour because it was such a good way to spread the gospel. It was a wholesome show compared to the shows on Waikiki, where the dancers are scantily dressed and they cover up their bust but everything is skimpy all the way down. Our shows were wholesomely done. Even the knife dance is really fierce but nothing is out of place; everything is done tastefully and respectfully. That’s why I really loved being part of the PCC. There was nothing immodest or offensive. The language of our songs was clean. Our songs didn’t use words that were degrading or disrespectful. It was a tool for showing the similarities of the Polynesians and also how they are different. In addition to our dancing and our dress, our show showed our basic ways of life. Basically all of the Hawaiians, Samoans, Tahitians, Tongans, and even Maoris who are far away, basically eat the same thing but prepared in a different way.

Did the PCC change your thoughts about missionary work and the Church worldwide?

I think missionary work is really very important, and for us, as Polynesians in the show, it gave the audience the idea of what our Latter-day Saint lives are like. The Polynesian Cultural Center helped me know that it was the Latter-day Saint views that help our show to touch other people. Our dances were fun, clean, and not degrading. They helped our audience feel happy. Some of the show was hilarious and some was very dangerous; in fact, they had a fire walk and they walked on it and actually sat on the fire. During the knife dancing, one of the things that the guy did was put a hot knife on his tongue. On his tongue!

When did you leave Hawaii?

I left Laie when I was about 24 and then I went to Samoa for two years to work and then back and forth to Hawaii after that. I came to Provo in 2005 because I have schizophrenia. My son has taken me in and I am happy to be here. For six months before I came here, I didn’t know who I was. I’m not sure if some medication prescribed to me in Samoa was too strong or something. The police found me on a curb and picked me up and now I am living here with my son.

It has been a wonderful experience being here. I am involved with a mental health program here and I’ve enjoyed everything I’ve seen here. We’ve gone to Logan, to Moab… places I’ve never been before.

How has living in Provo been for you?

I like the Church in Hawaii and Samoa and I like being here. The difference is that here, in my ward, the couples are very loving. They show their love openly, whereas in Hawaii or Samoa, couples sit down and I don’t see anybody putting arms around each other or holding hands, or saying, “I love you.” Here, I’m really touched by the couples. I walk around and see them give each other a kiss on the cheek and holding hands and if a child cries, a husband will walk out with them. In Samoa, it’s either the mother or the daughter who goes out. The father sits down and he’s the king. Here, the husband and the wife work together. I’m very impressed with our ward.

I just got called as a missionary for the Missionary Training Center. I will be helping missionaries speak Samoan by pretending to be an investigator a couple times a week. I am very excited about it because I can speak both English and Samoan.