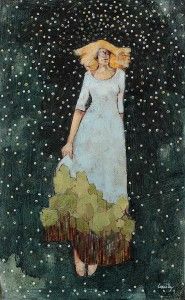 Frankly, I signed up for this topic but can’t remember why. Rather, I can’t remember what I thought I could offer on the subject of Heavenly Parents being willing to sacrifice Their son. I think I would refer readers to Fiona Givens and Terryl Givens new book The Christ Who Heals. It is a very different look at the atonement — the Lamb as Christ— and would give readers a lot more substance than my thoughts.

But, in the meantime, we have the story of Abraham and Isaac. Did Sariah know what Abraham was to do? Would you have sent your son or daughter with their father? Could you believe in a God like that?

After reading Rachel Hunt-Steenblik book of poetry called Mother’s Milk: Poems in Search of Heavenly Mother (illustrated by AshMae Hoiland— go read it), my own rusted poetry writing creaked back to life. And, a while back, after one particularly hard day, this is what came to mind:

Trust Him With Your Children?

Because, I admit,
I don’t.
This is a blow to finally see this.
I use to be a Believer–
Capital B.
But now I look around
At the mess that is suppose to pass for my life–
And I want my Mother.
(My Father answered my prayers to get me here.)

But,
No Mother would be ok with her children
Like this.

Except that Heavenly Mother designed the plans of this earth life with Heavenly Father. So even if I find the story of Abraham and Isaac incomprehensible, I cannot blame one parent over the other. Does this make me trust Heavenly Mother less? No. In fact, this realization made me trust both of Them more.

In many families I know, the mother is the one who frets most about keeping children alive. Some mothers even express concern about leaving young children to be tended by their fathers. This is not always true and I understand a sweeping gender statement. But, still, often seems that way. From a sheer evolutionary standpoint, mothers put a lot more oomph into making a child than a father puts. This is not a slam on fathers, just basic biology. Mothers seem to be more inherently aware of potential danger. In my family, this is how it works. (If you know many men who are exceptions or this is not your family, great. For the purposes of my own personal trajectory on trusting my Heavenly Parents, please roll with me.)

If females are the sacred nurturers, then extrapolate this to Heavenly Mother and how much she cares about the well-being of her children. And, so, if she were ok with this Abraham/Isaac plan, then it must be ok. In fact, it ALL must be ok. We know Heavenly Mother was part of crafting the plan of happiness (The Lds.org official church essay on Mother in Heaven cites Elder Ballard on this point: “We are part of a divine plan designed by Heavenly Parents who love us.”). We also know that this earth life means many of Her children suffer in horrible ways. If THE Divine Nurturer is “ok” with pain/suffering/death being part of the plan (Abraham and Isaac one example), it must be ok.

Which, frankly, rejiggers how I think about a lot of things. The things that I think are important, well, probably aren’t.

This doesn’t mean I won’t care about keeping my children alive and the wellbeing of other children. And doesn’t mean I think we should shrug about children suffering. BUT, obviously the suffering and the experiences of this life are not the end. The rejiggering turned me back into a Believer. If I trust Heavenly Mother, I can trust Heavenly Father too.

This is what the story of Abraham and Isaac means to me. That I must trust with more humility. That I must move with more belief. That there are so many things I don’t understand— but I do know I am loved by my Heavenly Parents. Yes, both of them.

« Finding Our Place: Making An Impact for Good in Our World
Reading Rebekah »