Recently in an interview, I was asked what I considered most important as I learned to deal with inequities in the church and in life, and what I thought was most important as I taught students to deal with those inequities themselves. I believe and I want to teach my students that the Spirit is the most important thing. If I have learned how to listen to the Spirit in my own life, the Spirit can help me process difficulties, it can help me know when reproof is necessary, it can help me know when to bite my tongue, and it can direct my path so I am certain the course that I am pursuing is correct no matter what outside perceptions may say. I often tell my students that understanding how God communicates with us individually is one of our major tasks in mortality. I believe that this is about recognizing and acting on the inspiration, but it is also about faith—trusting that God will respond. Though a book without any women, this lesson focused on Ether 1-6 offers perhaps my favorite scriptural example of communication and faith from a loyal, but flawed mortal. (And I particularly love Elder Holland’s take on the brother of Jared here.

From the Ether text we know that Jared, the political leader, often encouraged his Brother, “a man highly favored of the Lord,” to “cry unto the Lord” and seek direction for them. (1:34) The text gives us example after example of the Brother “cry[ing] unto the Lord.” Just as we build any relationship—communicating with confidence and trust does not come automatically, but it takes time and requires commitment. A faithful relationship is always reciprocal. A relationship developed as he cried to the Lord and listened to direction from the Lord. This condensed version of Ether’s record overlooks the complexities of each situation—we don’t know if all responses were in the affirmative, quite possibly there was a resounding no in there, perhaps coupled with a wait and be patient, but when the Brother of Jared asked, he got a response and he followed.

Through the process the Brother of Jared built confidence in the Lord, and the Lord likewise developed trust in him. After instructing the Brother to gather his family and friends together, the Lord told him that they would be blessed in the “land choice above all the lands of the earth,” and they would become a great nation of which there would “be none greater”—all because he had cried unto the Lord that long time. (1:42-43)

In the valley of Nimrod the Lord came down in a cloud to speak with the Brother—apparently without any solicitation—and then went before them guiding and teaching them. Their journey appeared to be going well: they traveled to the sea, they built their barges, crossed some waters, they arrived at the great waters and settled themselves again; but this was not where the Lord would have them settle forever. Farther away than they probably imagined, the Lord had a “land of promise” waiting for them (2:7). For four years they sat. We might think they were waiting for direction, but the Brother of Jared did not call on the Lord. (2:14)

Now we don’t know exactly what that means—did he never pray? Did he merely go through the motions? Whatever the specifics, the Lord came to the Brother of Jared and chastised him for 3 hours. His foundation of faith was not destroyed by one sin—even when it lasted for four years—nor was all the confidence the Lord had in the Brother lost. The Lord immediately entrusted him with another assignment to build more barges. The Brother followed “the instructions of the Lord,” and returned to report (2:16). The process continued and their faithful relationship grew.

We then arrive at the problem of light. The possibility of crossing the great deep for months without light was a miserable prospect. The brother had a problem and instinctively went to the Lord. Yet, this time the Lord didn’t give him an answer, He turned the task back to the Brother. He helped him understand what they would be dealing with and a few ideas that wouldn’t work so that he might be prepared, but He did not give him the answer. Because of the Brother’s foundation, the Lord entrusted him with this task and gave him the power to decide.

The trust the Lord had in the Brother of Jared was never a source of arrogance. As he returned to the Lord with his rocks he humbly explained his plan, continually acknowledging the Lord’s power and will, and his own weakness. He then boldly declared, “O Lord thou canst do this” demonstrating faithful and powerful confidence that the Lord would touch the stones and not require them to pass months in darkness (3:5). His faith was rewarded with an eternally illuminating glimpse.

While he was still reeling from that mystery revealed, the Lord asked him if he had seen more. The Brother 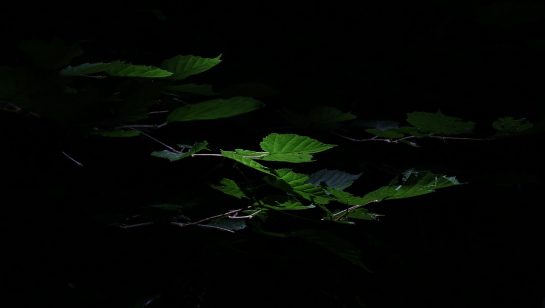 responded not in the form of a question, but again a directive: “Nay; Lord, show thyself unto me” (3:10). He knew that his God was a “God of truth” (3:12), a God worthy of all of his confidence and because of that sacred trust he could not be kept from beyond the veil (3:19). His faith became complete knowledge.

The brother of Jared is not the only one with a light problem or trust issues. The absence of light and understanding is a problem endemic to our mortal probation—darkness can surround all of us at times. Like the brother of Jared we all have the opportunity to seek light and confide in the Lord. Learning to trust in the Lord and listen to his Spirit is one of our major tasks here in mortality. As we humble ourselves and seek to build that faithful relationship the Lord blesses us with deeper levels of trust and understanding.

In Darkness, In Grace, Hillary Stirling

“I couldn’t receive the revelation I’d relied on throughout my life because the Spirit speaks to our hearts and minds—but my heart and mind both were broken by the depression…I couldn’t go back to the way things were before the depression, but I found that with God’s daily grace I could move forward.”

“It is through the whisperings of the Spirit that the divine nature of a doubter, after gasping for breath, finds the peace to breathe again.”

“Through the pure spirit of revelation in the temple, I was taught of my utter need for a Redeemer. I turned immediately to the Savior Jesus Christ in my thoughts and felt my anguish melt away and a great hope spring up in my heart. He was my only hope, and I longed to cling only to Him. It was clear to me that a self-absorbed natural woman ‘is an enemy to God’ and to people in her sphere of influence. In the temple that day I learned it was only through the Atonement of Jesus Christ that my prideful nature could change and that I would be enabled to do good. I felt His love keenly, and I knew He would teach me by the Spirit and change me if I gave my heart to Him, holding back nothing.”