By What Other Power & Authority
Janiece Johnson

In the middle of my junior year at BYU, I was called as a missionary to serve in Buenos Aires, Argentina. I knew it was what the Lord wanted me to do, but I had no idea how I—the girl who felt guilty every time I read about Alma wishing he were an angel so he could declare repentance—could be a missionary. I didn’t want to call anyone to repentance. Yet, once I was set apart and put on that black and white name-tag, I knew that something was different. I felt authority and the power of God as I worked to serve the people of Buenos Aires. There were a few times on my mission that I was absolutely awestruck by this power that I knew did not originate in me. But no one ever called it priesthood power.

Then in April of 2014, Elder Dallin H. Oaks gave his talk “The Authority and Keys of the Priesthood,” and I felt a little like Homer Simpson with a giant DOH over my head. Of course that was priesthood power.

This talk was not necessarily remarkable for its innovation, but perhaps more for its timing. No apostle had spoken about priesthood in such expansive terms over the pulpit for a good fifty years. Too often our discussions of priesthood rotate around offices and responsibilities of male priesthood holders and for the most part leave women out of the discussion more than a “I’m grateful I can receive a priesthood blessing” (not to diminish the importance nor the efficacy of priesthood blessings). As former Relief Society General President Linda K. Burton exulted, “We rejoice that we are privileged to live in this season of the history of the Church when questions are being asked about the priesthood.”

In that talk, Elder Oaks, offered a second witness to a powerful truth proclaimed to that smaller BYU women’s conference audience by President Burton. She said, “We hope to instill within each of us a greater desire to better understand the priesthood.” Elder Oaks, followed it up reinforcing “…that needs applies to all of us.” Surely President Burton and Elder Oaks have a better grasp on priesthood than I do, but their grasp is likewise limited. And they both recognize that. Priesthood is not just contained in a list of offices and responsibilities; it is the power by which the earth was created. It continues “…without beginning of days or end of years” (D&C 84:17). Understanding priesthood is a worthy pursuit of a lifetime and into the eternities.

When Joseph Smith took the sewing circle started by Mary Cook and Sarah Granger Kimball in 1842 and gave them “something better,” he organized this new organization to “move according to the ancient Priesthood.” (28 April and 31 March 1842.) The Female Relief Society of Nauvoo restored an ancient woman’s organization. Joseph reinforced the essential nature of this women’s organization saying that the Relief Society and the introduction of complete temple rites perfected the organization of the Church of Jesus Christ.1

In Eliza R. Snow’s meticulous notes of the sixth meeting of the Relief Society on April 28, 1842, we hear Joseph offering the sisters power and authority through the structure of the Relief Society–“I now turn the key to you in the name of God, and this society shall rejoice and knowledge and intelligence shall flow down from this time—this is the beginning of better days to this society.” The Relief Society offered women a formal structure to receive priesthood authority and prepared women for the ordinances of the temple.

Revealed a decade earlier, the revelation recorded in section 84 of the Doctrine and Covenants supports this connection of priesthood power and ordinances leading to the temple. In verse 21, the Lord declares, “In the ordinances is godliness made manifest.” As we choose to receive priesthood ordinances we learn about the character of God and our Savior, how to be godly ourselves, and they show us the path to return to our Heavenly Parents through our Savior’s atonement. Through the ordinance of baptism we are made clean as our Heavenly Parents are clean and we enter into a covenant relationship with Christ. When we receive the Gift of the Holy Ghost we are sanctified as they are—literally made holy. Though I won’t enumerate specific covenants, when we make temple covenants we demonstrate that we are committed, learning, and loyal. When we are sealed, we are joined together with a spouse as one—as are our Heavenly Parents.

Disciples make all of the covenants we can make. Women receive both Aaronic and Melchizedek priesthood ordinances and administer Melchizedek priesthood ordinances in the temple. Nineteenth-century Relief Society General President Bathsheba W. Smith reminded the sisters that Joseph Smith “…wanted to make of us, as the women were in Paul’s day, ‘A kingdom of priestesses.’ We have the ceremony in our endowments as Joseph taught.”2 Priesthood, Relief Society, and the temple are all essential. They lead us with power through mortality on a path that returns us to our Heavenly Parents. 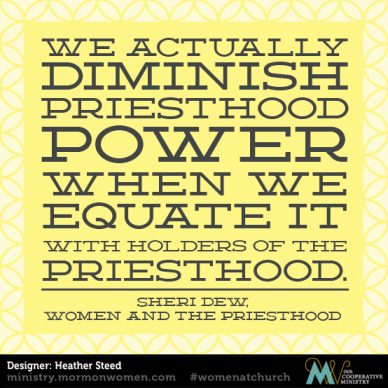