“. . . I spend much of my personal life trying to heal, which is like saying I spend much of life trying to get free–free from the templates that no longer serve me, free to seek God with an unfettered heart. The temple is both road map and hospital, ambulance and vision-lodge for the wounded pilgrim. It teaches us to search not only for healing but also for The Healer. When we find him, we find all” (Wendy Ulrich The Temple Experience xi). 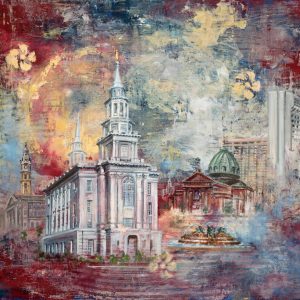 Ezekiel was a Judean taken captive during the early days of Babylon’s assault against Jerusalem. His prophecies date from 593 to 571 BC, all written from the exiled Hebrew community of Tel-abib. During the early years of his exile, Ezekiel directed his prophecies to the remnant inhabitants of Jerusalem, giving them dire warnings to repent, that destruction was imminent. This destruction became reality in 586, when Nebuchadnezzer II finally breached the walls of Jerusalem, sacked the city, and burned Solomon’s temple. It is at this point, when hope seemed lost, that Ezekiel’s visions changed in tone. They turned away from death and warning towards visions of hope. This hope centered around an architectural pattern for a future temple to be rebuilt when the Israelites would return to their native land. How did they know that they would go back home? They didn’t know. But they had been given prophetic promises, and they had faith. And so in this darkest hour when there was no Jerusalem to look toward, Ezekiel recorded his most joyful prophecies.

While the physical description of his visionary temple is exhaustively detailed, Ezekiel’s intricate language of sensory images also conveys deeper spiritual truths. His concrete building instructions are mixed and blended with pure emotive symbols, like the river of water that flows from the temple to revive and refresh the landscape.

These visions anticipate the literary tradition of apocalyptic texts that can be found throughout ancient scripture. Although the term “apocalypse” is most commonly linked with the Revelation of John, it can be defined as any prophetic literature that brings what is hidden into the light and that conveys information and emotions through sensory images, numbers, and physical experience. Like other apocalyptic texts, Ezekiel’s visions are presented and explained by a heavenly messenger whose ultimate purpose is to convey a glorious resolution of the conflict of good and evil into a state of peace and joy. Other apocalyptic texts include the visions of Daniel, the Revelation of John, and, in the Book of Mormon, the visions of Lehi and Nephi. In these visions, prophets taste the sweetness of the written word of God, hear and see rushing rivers, grasp iron rods, and see stars wheeling in the sky. Numbers, geometric symmetry, and reading or writing as a performative act also figure prominently in Ezekiel’s prophecies. Through these ritual embodiments, we catch a glimpse of God’s promise of salvation.

In today’s drily scientific world, Ezekiel’s swirling visions seem foreign or esoteric. It’s rare for a religious leader to speak in these highly symbolic, numerological, or ultra-sensory ways to convey gospel truth. But one place where this does happen, where the experiential visions of Ezekiel and others find a parallel, is in the temple. All ordinances whether in or out of the temple are performed symbols that call upon us to engage our senses: During the sacrament, we eat. At baptism, we are washed. In the temple, these ordinances are extended into further embodied symbols of the conflicts of mortality and the salvation of humankind. In temples, we feast our eyes on visual imagery, are anointed, and clothe ourselves in covenants. In symbolic ritual, we walk the steps from Eden, through mortality, and back to the presence of God, tangibly witnessing our faith in Christ’s saving power.

Why do we do this? Why do we follow after the pattern of ancient visions in order to symbolically perform these gospel truths through ritual and ordinances? Why not simply think about them, or write them down in plain moral and rational terms? It’s a question that I can’t really answer. But I do know that sometimes I crave a divinity that goes beyond syllogisms. And don’t we all long for an experiential understanding of God’s love, a tangible witness of spiritual beauty? Much too often, God feels far away. He must have seemed far away to the exiled Israelites in Babylon. They had no homeland, no temple, no tabernacle, no Holy of Holies. And it was at this moment that they most needed Ezekiel’s visions of the symbolic embodiment of God’s love and salvation of humankind.

In Ezekiel’s vision, the God of Israel extends his spiritual blessings as a river that floods the countryside, with the temple as the source of those healing waters. This healing goes beyond logical understanding or mere memorization of information. It is a whole body experience, enacting and empowering a living gospel. As we engage in ordinances and temple worship, we can become visionaries like Ezekiel, doers of the Word. In the process, we can find healing and faith.

« Ministering: Thoughts from a Deputized Sheep
Move Beyond the Expected Sphere »