I often hear people say that the church is the same wherever you go. This is true for some of our more obvious practices-from our meeting protocols to the speech patterns we fall into when we talk about spiritual experience. It’s true in our deeper theology as well. We can walk into any Sunday service and be offered the same sacramental covenants and blessings, we read the same scriptures, and we find hope in the same Christ.

It’s natural to value consistency and continuity within the church organization, especially when we read scripture verses in which the Lord says “I change not,” (3 Nephi 24:6/Malachi 3:6)-but if there’s anything that a study of early church history should show us, it’s that this is a church of change, and that there has been (and still is) significant variety to our religious experience.

Lesson 33 talks about one of these moments of crucial change, describing the upheaval surrounding the death of Joseph Smith and the beginning of the Mormon pioneer migration from Illinois to the Salt Lake Valley. The lesson focuses on the succession of authority, when Brigham Young and the Quorum of the Twelve Apostles led the Saints under precarious circumstances. Despite the contention within the church membership, some breaking away to form their own groups, others simply fading back into the landscape of the American frontier, this difficult era was not the end of Mormonism. Rather, it set a precedent of collective leadership that allowed later transitions of authority to happen with little trauma.

But this same era saw a more troubled transition for the women of the church. After Joseph Smith’s death, Brigham Young disbanded the Relief Society, fearing that small group meetings of women would encourage dissent or discontent. Many of these Mormon women still supported Brigham Young’s leadership, and beginning in 1846, fled the violence of Illinois mobs with their families, hoping for a peaceful home in the West. Significant numbers left Nauvoo in cold weather over muddy roads, stopping at camps in Iowa and eventually wintering in Nebraska before travelling by wagon, handcart, and on foot to Utah. The manual records that, “On the first night of encampment at Sugar Creek [in Iowa], nine infants were born.” Along with many other births, there were deaths from sickness and exposure, so many that there is no accurate record of the number. Of all times to need a Relief Society, this was one!

But a lack of formal organization and authority didn’t stop these women from gathering and meeting together, ministering to the needy, and simply enjoying one another’s company on the westward trek. Without their Relief Society identity and without their president, Emma Smith, who had stayed behind in Illinois, the women on the trail banded together and got to work. It wasn’t until 1854 that local chapters of the Relief Society were formally reinstated within the church structure in the Salt Lake Valley, but even with gaps in leadership and organization these women had been praying and singing together, blessing each other and caring for the sick and needy all along. 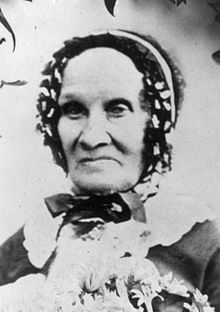 One woman’s meticulous journal shows a glimpse of life on the trail and highlights some of the variety of Mormon religious experience: Midwife Patty Sessions recorded the events of her 52nd birthday on February 4, 1847 in Winter Quarters, Nebraska. She attended a gathering of singing and dancing, visited with Eliza R.

Snow, met with the “Silver Greys” (older folks at the camp) for more singing, praying, blessing, and speaking in tongues, and finally assisted two mothers in labor in the evening. The next day she records more of the same: assisting at a birth, ministering at a deathbed, and then attending another gathering of music and dancing! In a poignant conversation with her dying friend Joanna Roundy, Patty remembered her own deceased children and “sent word by [Joanna] to them” trusting that her friend would see them when she passed through the veil.

Sister Sessions’ experience of culture and worship might not look too familiar from a modern Mormon perspective. Speaking in tongues was common in those early gatherings, for example. Families looked different, with some women in polygamous marriages, while other monogamous women were living apart from their missionary husbands. And the Word of Wisdom was not a required set of dietary rules—In her diary, Sister Sessions records giving a toast of brandy to her fellow believers! With these differences of practice, can her story still be relevant to us?

There are many reasons to study the transitions, progress and regress of church history. History gives us precedents to follow, models of courage and faith, justification for traditions and beliefs. But it also presents us with a past culture that is inevitably at a distant remove from our own experience and that presents us with problems of interpretation and application. How we grapple with these encounters with “otherness” can define our faith. Do we approach with curiosity? Moral judgment? Reverence or respect? Empathy? Fear? Prayer? Do we let ourselves encounter questions that stump us? Do we embrace chances to think deeply about our own moral choices and spiritual convictions? When we reflect on change and transitions in church history, do we always need to justify administrative decisions or defend the wit and wisdom of the believers? Or can we trust in God’s hand even when the story is fraught with human error? In our encounters with these stories and experiences can we find the deep currents of spiritual kinship that tie us to God and one another?

« For the Salvation of Women
Perseverance »