Many of us are familiar with this lesson’s story of malaria-ravaged Brigham Young and Heber C. Kimball rising from their mission-bound wagon to shout “Hurrah, Hurrah for Israel!” to encourage their sick wives. A less commonly shared story is what happened at home when the wagon pulled away.

Brigham’s wife, Mary Ann Young, left that scene and worked to provide for her seven sick children, one of which was only several days old. They ran out of food after two months, and Mary Ann, still suffering from malaria, made many stormy winter crossings of the Mississippi River in a rowboat to collect small allowances of food from the tithing office. She lost her lodgings and lived in a horse stable for a time, taking in washing and sewing to scrape by. Eventually, she erected a rudimentary log cabin that lacked doors and windows.

The sacred sacrifices many Nauvoo women made to send husbands on missions allowed for phenomenal church growth. Yet female efforts to build the kingdom of God were not limited to behind-the-scenes suffering while the men acted. Women acted in their own right, fundraising for the temple, serving the needy, and forging spiritual strength.

Women in Nauvoo actively contributed to the construction of the temple. Mercy Fielding Thompson led a dual-continent, women-organized penny drive that brought in over $2,000. The funds paid church debts, bought glass for the temple’s windows, and purchased a construction crane for the temple.

Sarah Granger Kimball was particularly creative in her temple fundraising efforts. Following her son’s birth, she asked her prosperous non-member husband what he thought the child was worth. When he agreed that the boy was worth at least a thousand dollars, she argued he was half hers and declared she wanted to pay tithing on her $500 portion. After joking with Joseph Smith about the boy’s status as church property, Kimball’s husband deeded property to the church worth more than she requested.

I love these women’s examples of innovation and proactivity. These were women that did not wait to be handed an assignment; these were women that considered issues that mattered deeply to them and used their resources and intellect to make a difference.

Beyond these efforts, Nauvoo was the era when Mormon women truly stepped forward in unity to do the Lord’s work through the organization of the Relief Society.

The Relief Society came about because two women proactively sought ways to support the building of the temple, organized a sewing society, and then presented their constitution to Joseph Smith. He praised their constitution, but asserted that the Lord had “something better” in mind than a written constitution. He wanted to organize the women “after the pattern of the priesthood.” From the spark of their idea, Joseph received the inspiration to form the Relief Society, an organization I adore for its flexibility and vision as it continuously adapts to meet the needs of its sisters and the world at large.

To me, this is what Relief Society is all about – big ideas, small offerings, and God creating “something better” when we work together.

I love reading the Nauvoo Relief Society Minute Book and seeing this principle in action. In it, we see women recognizing needs in their community and pooling their talents and resources to address them. To improve their effectiveness, the Nauvoo Relief Society organized the “necessity committees,” the precursor to our current visiting teaching program, which visited women in their homes to assess their spiritual and temporal needs, and solicited donations from those able to give.

President Emma Smith’s charitable vision went beyond providing donated goods. The Relief Society helped women find employment, arranged for elderly widows’ gardens to be planted, and even organized a boycott of employers that shorted widows on their wages.

Yet the Relief Society was more than a successful charitable organization. At its founding meeting, Emma rejected the name of “Benevolent Society” because she recognized that this organization had a broader vision than the benevolent societies prevalent at the time. The sisters understood they were working to build God’s kingdom on earth through their efforts.

Relief Society was a place to receive instruction. It was a place to sing, testify, serve, practice spiritual gifts, prepare for temple blessings, and discuss how to apply gospel principles in their complicated circumstances.
I am grateful for the spiritual legacy left me by the women of Nauvoo, and the models they have provided me for innovation and proactivity in the ways I serve the Lord. Through my participation in the Relief Society, I can bring my desires to do good (that are frequently larger than my own abilities) and work in unity with my sisters to transform these desires into “something better.”

“After attending high school in Michigan, I went to BYU, which was not a great fit. It seemed like everyone was from California or Utah and I felt like an outsider. I was excited to move to Boston for graduate school, and I was delighted by the diversity there and the Cambridge University Ward. I studied at The Fletcher School [at Tufts University] and planned to work for the State Department, but then the Vietnam War came along and blew my world apart. It raised a million issues, especially with my father being a military man. I didn’t know who to trust or what information was truth versus lies. I was going to get a PhD, but I instead decided to take a year off and I never went back. I think that was a turning point; I became much more of a questioner and became parts of groups that opposed the war. After that, Johnson’s Great Society shaped me, too. The women’s movement—around the time of the Equal Rights Amendment—became important in my life also. All these issues were on our minds around the question “What’s our place?” At that point [in 1974], a group of us—Mormon women in Cambridge—decided to start Exponent II, a revival of the Woman’s Exponent newspaper published by early members of the Relief Society [from 1872-1914]. That has played a big role in me feeling like the Church was always mine, because if something offended me at church, I could call up those women and talk it through. I still stay in touch with them. At about the same time, a very enlightened Institute Director also asked us to do a series of classes on the roles of women in the Church. That legitimized our more private dialogues and brought many more men and women into the discussion.” 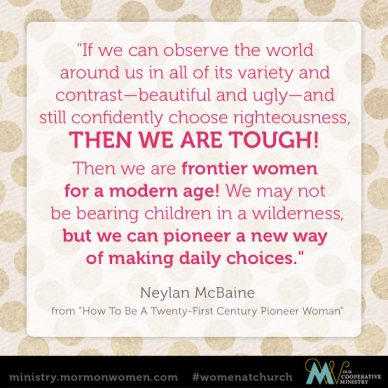 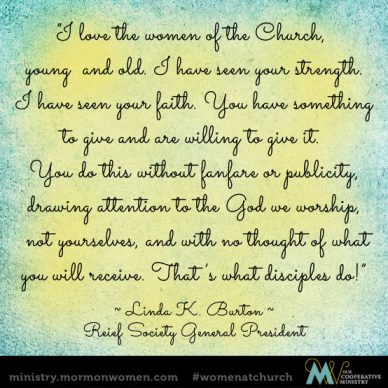 « The Rest of Their Story
Discovering Our Legacy of Women »