There are few chapters in scripture as well known as Luke chapter 2, the story of Jesus’s birth. Every Christmas Eve, families gather to read this story, sometimes with children dressed up in bathrobes to be shepherds and white lab coats to be angels, often pausing to sing Christmas carols at various points throughout it. Any time I read these verses, I feel nostalgic—remembering many years of these scripture reenactments that, for me, represent the essence of Christmas. 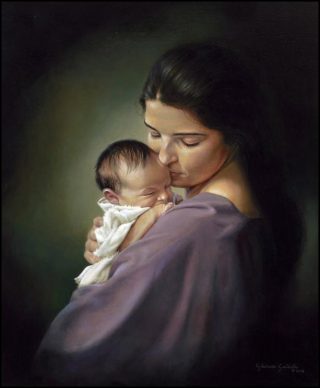 As the years have passed, this scripture passage has taken on different significance at different times in my life. When I had children of my own, this familiar Christmas story became not just the story of a baby—but the story of a mother. When I felt overwhelmed to be shaping and guiding the beautiful children entrusted to me, I wondered how it must’ve felt to be entrusted to care for a child the angel Gabrielle tells Mary will “be great” and called “called the Son of the Highest” (Luke 1:32). When I delivered babies in clean, comfortable hospitals, I thought of Mary laying her baby “in a manger, because there was no room for them in the inn” (Luke 2:7). As I worried about how to keep my children safe from “dangers” like putting toys in their mouths, I thought of Mary fleeing her home in an effort to keep her child safe from a king who wanted to kill him.

My family loves to travel. In our travels, I have often been struck by Mary’s role in other religions and cultures. When we lived in Valencia, Spain, during Semana Santa (Holy Week), there was a giant statue of sorts erected in the main downtown square. In art museums and cathedrals in England, Germany, France, Italy and Mexico, I’ve seen paintings of Mary—of her as the young mother of Jesus, but also as a powerful figure who could bring about—or at least petition for Jesus to bring about—good works and miracles. Mary, the lone woman in a cast of males in Jesus’s birth story, plays much more than a token role. She is a formidable central character.

In our Mormon culture, Mary does not loom quite as large. We respect and honor her—but we don’t build large statues of her or appeal to her for miracles. Because there is such a dearth of women available in scripture for us to learn about and set as role models, I sometimes wish we focused on her more. While of course, the Savior is our perfect example, spending some time learning and thinking about Mary can add to the examples available to us, particularly examples of women we can seek to emulate. In these chapters, three characteristics in particular of Mary stand out to me:

1) Mary had a desire for understanding. When the angel appeared to Mary, he told her, “blessed art thou among women.” (Luke 1:28) Mary’s reaction wasn’t just to smile and congratulate herself. Instead, “she was troubled…and cast in her mind what manner of salutation this should be.” (v 29) Later, when he tells her she will “bring forth a son,” (v 31) she responds with a question, “How shalt this be, seeing I know not a man?” (v 35). Then after the shepherds visit Mary and the baby Jesus, Luke tells us “But Mary kept all these things, and pondered them in her heart.” (Luke 2:19)

2) Mary demonstrated courage. We don’t know much about how Mary felt or what she thought, but we do have her actions to tell us about her. Mary delivered her baby in a manger. She fled with her young son to escape a murderous king. Mary was not married when she became pregnant. There are a variety of opinions on whether or not Mary had to endure scorn for getting pregnant outside of marriage (perhaps she and Joseph married quickly and people never knew) but the possibility of being scorned was almost certainly a possibility—and she agreed to the plan anyway. All of these actions required courage.

3) Mary taught important truths. These chapters also include the story of Jesus’s parents finding him in the temple teaching. Doctrine & Covenants 93:13 tells us that Jesus “received not of the fulness at the first, but received grace for grace, until he received a fulness.” It takes some extrapolation on my part, but I think it’s reasonable to assume that Mary, as Jesus’s mother, played a role in teaching and guiding him as he received this grace and came to understand his role.

While we only have small insights into Mary’s character in the story of Jesus’s birth, they are enough to paint a picture of a woman of faith—a woman we can seek to emulate.

« Seeing Women
God With Us »