The Gospel Doctrine lesson #23 manual objective is “to increase class members’ understanding of the plan of redemption and the power of having more than one witness to testify of gospel truths.”

To increase understanding of the importance of having a diversity of witnesses, both women and men, and to be more aware of how to encourage those witnesses.

In this lesson, Alma attempts to teach the people of Ammonihah, but they reject him. He leaves the city until an angel commands him to return. On his return, he meets up with Amulek, a resident of Ammonihah, who begins to teach with him.

The scriptures tell us in Alma 10:12 the effect the two men teaching together had on the people: “And now, when Amulek had spoken these words the people began to be astonished, seeing there was more than one witness who testified of the things whereof they were accused, and also of the things which were to come, according to the spirit of prophecy which was in them.”

The lesson manual asks us: “What are the benefits of having more than one witness when sharing the gospel?”

This diversity of voices comes into play in many aspects of churches. We have a variety of speakers in sacrament meeting, a variety of testimonies in our testimony meetings, and we make many decisions in councils or presidencies where a variety of opinions are shared.

Often, though, one type of voice or witness is missing or under-represented at church: the feminine voice.

Several church leaders lately have commented on the unique perspective women offer—a perspective that is needed and that adds value. In President Russell M. Nelson’s already often-quoted talk, A Plea to My Sisters, he said, “The kingdom of God is not and cannot be complete without women who…can speak with the power and authority of God!”

Unfortunately though, our society in general, and many church settings in particular, discourage this other witness—the voice of women. A recent article in the New York Times cited several troubling studies. Research has repeatedly shown that women speak significantly less than men in mixed gender settings. The conditions that make women more likely to speak up are when women are a majority and when women are leading. One of the studies, conducted by researchers at BYU and Princeton, concluded that “having a seat at the table is very different than having a voice.”

At church, in most decision making forums or meetings though, women are neither leading nor the majority. Two significant ward leadership meetings, ward council and PEC (priesthood executive council), are dominated by male voices and witnesses. PEC has at most one female attendee mentioned in the handbook (the Relief Society president) along with a large handful of men. Ward council includes three women and well over twice as many men. Stake meetings are even more male-dominated. And of course in every decision making meeting involving men and women at church, it is a man who presides and who has the final decision making authority.

Research shows that even when women have more power, they self-regulate their speech much more than men do. A Yale study found that women were afraid of negative consequences in speaking up too much. They fear they will be seen as aggressive. And, their fears are not unfounded. In other words, the article concluded, “men are rewarded for speaking, while women are punished.”

In order to fully empower these other witnesses and be sure they are heard will take some effort on everyone’s part. We need to make space for women’s witnesses and voices. To do this, we need to invite more women to the table to begin with. But we also need to be aware of the social stigma women face when speaking up and speaking out as President Nelson encouraged. If we want to hear women’s witnesses, we need to create an environment where they are valued. This can include encouraging women to add their witness by asking for it specifically and individually in church councils. We can also provide examples of women’s witnesses by including more women as speakers in meetings such as stake conferences and leadership trainings.

When we treat the diversity of witnesses and voices as a strength to be sought after instead of something to be tolerated if necessary, the result might be, in the words of Alma 10:12, “astonishing.”

Where Her Truth Is, Morgan Lyon Cotti

I think a stronger female voice is crucial. I used to teach in the Young Women and now I am in the older teenager Sunday School. I love the new lessons. I love how it is an open curriculum. But the talks and videos that are listed are usually are of or from men. So I usually have to go searching for a talk or quote by a woman. In my opinion, we are going to have to have some mixture of grassroots efforts and having women be more willing to speak up. And then at the highest level, I hope we will continue to see great changes like the mission age change and the emphasis on women’s voices being included in ward council.

Oh, How We Need Each Other, Bonnie L. Oscarson

We just need to relax and rejoice in our divine differences. We need to realize that we all desire to serve in the kingdom, using our unique talents and gifts in our own ways. Then we can enjoy our sisterhood and our associations and begin to serve. 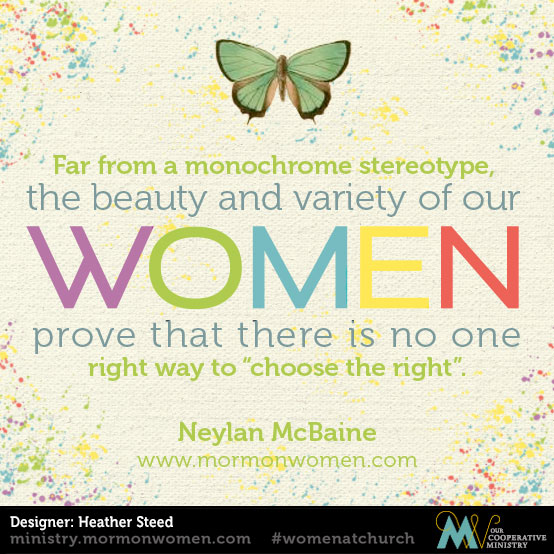 « Fixer Uppers
A Priesthood of Peace »