I remember in high school in Provo, Utah, one girl in my class was not Mormon. I recall feeling true sorrow for her position, sorrow at the fact that her parents drank wine and she wore sleeveless dresses to the dances. I was not the only one to feel sorry for her as she was so clearly part of the “world.” It didn’t take me long past my high school years to question my own righteous concern for this girl and her family, who I’d never met in person, and not long after that to truly regret it. As I’ve continued to grow older, I’ve felt sincere sorrow, not for her, but for the culture that put me at odds with someone unnecessarily. Since that time, and increasingly so, I’ve been wary of phrases that put me at odds with “the world.”

It seems that far too often my Sunday school classes have left me with the sense that the world is indeed wicked. The world is often represented as an unclear group of people that it becomes difficult, or at least it was for me as a young Mormon, to distinguish between the supposed wickedness of drinking wine, and the true evil of violence and hatred. 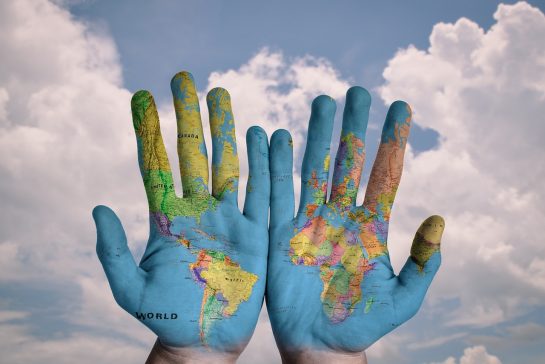 This is not to say that I don’t believe there is real evil in the world, but I have learned to be very careful and generous in not conflating the entire world outside of Mormonism with evil. The truth is that the world is rife with goodness. I won’t list here the ways in which that is true, but I think it is worth spending some time individually to observe, study and know the ways in which that is true.

In this particular lesson, however, I do love Mormon’s intense dedication to writing, recording and preserving. In fact, he is tasked with this responsibility starting as a young child. Rarely do women show up in the Book of Mormon, let alone their words. I had a friend who asked me the question, “Do you think that women can ever fully be equal in the church before we read and know scripture written by women?” I have wondered on that question ever since. The question itself has asked several more questions of me: What do we consider scripture? How would women’s scripture look? Where would we read it? Who would write it?

For me, the answers to these questions are surfacing in many ways in my own life. I see Mormon writing both to lead, teach, tell, help and change people he loves, even when they do not listen. I see then the women of now capable of doing the very same.

When I think of what scripture means to me, I think of the knowledge I want to pass on to my children and to those who come after me. I think of the writing of my own story as a task that is worthy of being taken seriously. I think that the continuing to break open and spend time with female spiritual narratives is vital to the church and its construction over the next centuries.

I don’t have authority to officially say what is and what is not scripture, but that feels beyond the point when both the reading of the stories of other women, and the telling of my own, has changed my heart and brought the spirit into my life in the same way that the Book of Mormon and the other books of scripture have. I believe women’s voices have great power to carry into the world, to carry Mormons, as a people, into the world so that we might not just cloister ourselves from the world, but participate in, and make it better.

Check out Ashmae’s newest book, A Hundred Birds Taught Me to Fly.

A Citizen of the World, Camilla Smith

Everyone needs a family and that tribe to give them strength, but then that strength should be focused outside of the tribe and community rather than trying to keep people huddled together. That’s really at the core of my religious faith. I am a very religious person. I am a very religious Mormon. But the purpose of the church is to make people strong in order to reach out to the larger world, and not to keep us isolated from the world.

“You can’t be what you can’t see.” I think maybe it was Marian Wright Edelman who said this. But I heard it over and over again on Mormon Feminist blogs and in my feminist readings during graduate school. Certainly, there is truth to it. Marginalized populations benefit from being seen. It helps to shape a sense of self, a sense of personhood, a sense of mattering to the world. Women have long been written out of history–it’s certainly not just a Mormon paradigm. I think there’s something really important about finding opportunities to be inclusive and looking for moments, ways and places, where the many achievements and contributions of women can be highlighted.

“Because you are His child, He knows who you can become. He knows your fears and your dreams. He relishes your potential. He waits for you to come to Him in prayer. Because you are His child, you not only need Him, but He also needs you. Those sitting around you right now in this meeting need you. The world needs you, and your divine nature allows you to be His trusted disciple to all His children. Once we begin to see the divinity in ourselves, we can see it in others.”

“Mormon was a true disciple who lived in a day when ‘every heart was hardened, … and there never had been so great wickedness among all the children of Lehi.’ How would you like to have lived in that day? And yet Mormon boldly declared, ‘Behold, I am a disciple of Jesus Christ, the Son of God.’ Don’t you love Mormon? He knew who he was and what his mission was and was not distracted by the evil that surrounded him. In fact, he considered his calling to be a gift.”

« This is OUR Gospel
Remembering the Refugee »