When Have You?
Rachel Hunt Steenblik

After the pattern of Girls Who Choose God: Stories of Courageous Women From the Bible, by McArthur Krishna and Bethany Brady Spalding. 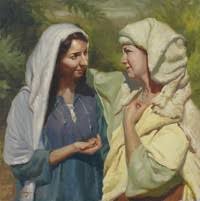 Orpah and Ruth both grew up in Moab and eventually fell in love with two brothers, Mahlon and Chilian, who moved with their parents from Bethlehem. The brothers’ father passed away, and the two couples married soon after. They all lived together in Moab for about ten years, with Mahlon and Chilian’s bereaved mother, Naomi. During that time, the daughters-in-law grew very close to their mother-in-law. More sorrow came to the family when Mahlon and Chilian joined their father in death and Orpah and Ruth joined Naomi as widows. There was a famine in Moab, and without their husbands, the three women struggled to get enough food. Naomi heard it might be easier in Bethlehem, so the women packed up their belongings and began traveling there together. At some point in their journey, Naomi turned to her daughters-in-law and said, “My dear girls, go. Go home to your mothers. I pray that the Lord will be kind to you, as you have been kind to my sons and to me. May the Lord let you find rest.” She kissed them and they spoke and wept, “Of course we’ll go with you to your family.” Naomi answered that she was too old to marry and have children. Who would be their husbands? Again she said, “Go.” Again the daughter-in-laws wept.

Orpah and Ruth had a choice to make. They could stay with their beloved mother-in-law, Naomi,

they could return to live with their own mothers and families.

Orpah had loved her husband, Mahlon, fiercely and greatly mourned his death. She also loved his mother, Naomi, and was concerned about her wellbeing. Still, Orpah felt called to return to her own mother and the faith of her childhood. She sobbed and sobbed as she kissed Naomi and Ruth goodbye.

Similarly, Ruth had loved her husband, Chilion, fiercely and greatly mourned his death. She also loved his mother, Naomi, and was concerned about her wellbeing. She missed her own mother but felt called to stay with Naomi and to claim her faith as her own. After kissing her sister-in-law goodbye, Ruth hugged her mother-in-law tightly and cried, “Please don’t ask me to leave you or to stop following you. Wherever you go, I will go. Wherever you sleep, I will sleep. Your family will be my family and your God my God.”

When have you had to make a hard choice? How did you listen to the voice inside you and the whisperings of the spirit to do what was right for you? 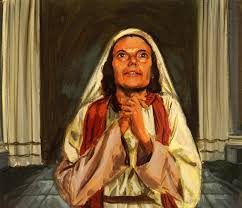 Hannah was married to a kind and faithful man named Elkanah, who was also married to a woman named Penninah. Hannah longed to have children but was not able to do so, while Penninah had many. This was sensitive for Hannah, especially because Penninah used the situation to be unkind. Once a year, Elkanah took his family to worship at the temple. Each year, Hannah would fast, and weep, and pray, from a mixture of faith, and sadness, and desire. One year, Elkanah saw her. He asked, “Why are you crying? And why are you going without food? Why is your heart grieved? Aren’t I better to you than ten sons?” He was good to her, but she was still sad.

Hannah had a choice to make. She could continue to pour her heart out to the Lord in prayer and fasting at the temple

she could put on a false smile and pretend that she was fine.

Hannah chose to be honest with herself and with the Lord. She was not afraid of her bitter soul, or that as she continued to pray, she “wept sore.” She knew, as Chieko Okazaki shared for our time, “The Lord doesn’t want just pretty prayers. He wants real prayers. Sometimes we think of those eloquent, gracious prayers in sacrament meeting and General Conference as the models for our personal prayers…. Heavenly Father wants to hear the scared and mad prayers just as much as he wants to hear the grateful prayers.” So Hannah prayed, so sincerely and fervently that the priest thought that she was drunk. (She also chose to make a vow to God, which in her case–but might not be in ours–was ultimately fulfilled.)

When have you chosen to open your heart and pray honestly to God?

« Deborah: Praise Be to God
Being There »